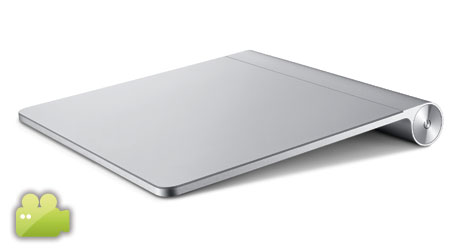 Apple’s Magic Trackpad has been designed for those who prefer interfacing with their Macs, PCs or docked laptops with their fingertips, rather than a mouse.

As such, it is reminiscent of Wacom’s Bamboo Touch tablet, launched last year, and the philosophy goes that ‘touch’ is the most natural way to interact, so why not make more of your hands and fingers when controlling your computer.

Also, considering the emergence of gesture-based controls from the touchscreens of iPhones and iPads, many computer users are becoming familiar with finger movements such as pinch-to-zoom, slide-to-scroll or swipe-to-turn pages.

So what’s it like to use the Magic Trackpad, and more importantly, is it better than a mouse?

Well, for those of us who are already familiar with the trackpads used on Apple’s MacBook and MacBook Pro laptops, there’s not a lot new here – except that there’s more space to play with. The materials feel the same, and like the notebook trackpads, the Magic Trackpad clicks when you press it, just like a mouse button.

Compared to the new generation of Apple wireless keyboards, the Magic Trackpad looks like a smaller, key-less sibling. While not quite half the width of the wireless keyboard, it has the same look, and the pad inclines at the same angle.

The Magic Trackpad uses Bluetooth wireless networking to connect to your PC or Mac, which is good for some people, but can be a pain when the batteries start to run out, especially if you have to change the batteries on your wireless keyboard too. Coincidentally, Apple has just released a battery charger for those fed up with buying new batteries all the time.

So is the Magic Trackpad better than a mouse?

Yes and no. While it certainly offers more control options than a standard mouse, with support for at least 12 finger gestures, these lack the precision provided by a mouse and pointer.

I’ve been using the Trackpad for less than a day and have also edited the short video accompanying this review. During that process, I found myself looking for the mouse fairly often, as using the Trackpad takes slightly longer. With the video, I was unable to achieve the dexterity and fine levels of adjustment  – especially when altering the length of clips – I’m accustomed to from a mouse.

Ultimately, the Magic Trackpad is great for navigating your desktop, scrolling through websites, zooming into and out of PDFs and photos, and turning ebook pages. When it comes to professional creative tasks such as tracing or retouching photos, a pro-level touch tablet with stylus will be a better option.

In terms of price, you can get the Wacom Bamboo Touch tablet for around $99, which is the same as Apple’s Magic Trackpad. From an aesthetic point of view, the Magic Touchpad gets a gold star, plus it’s wireless, which may be an advantage over the Bamboo, depending on your preference.