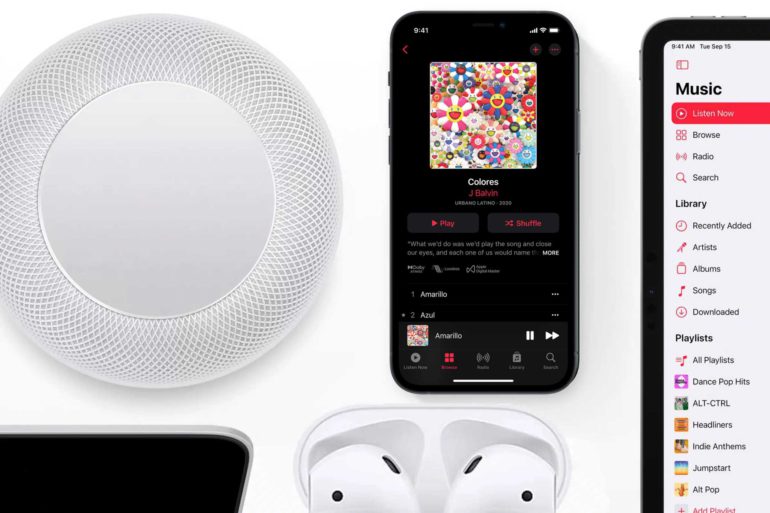 Spatial Audio allows artists to mix their music, so the sound appears to come from all around, including from above. With the introduction of Spatial Audio, Apple Music will also support the Dolby Atmos surround sound format already employed by blockbuster movies and television shows.

At launch in June, thousands of songs on Apple Music will become available in Spatial Audio. This will grow over time as Apple and Dolby assist musicians, producers and sound engineers with adopting Dolby Atmos. This includes doubling Dolby-enabled studios in major markets, offering educational programs and providing resources to independent artists.

Where available, Apple Music will automatically play the Spatial Audio version of music tracks on compatible devices. This includes all AirPods and Beats headphones which feature Apple’s H1 or W1 audio processing chips. Spatial Audio is also supported by the built-in speakers in the latest versions of Apple’s iPhones, iPads and Macs.

At the same time, Apple Music subscribers will also be able to listen to more than 75 million songs in Lossless Audio. It relies on Apple’s ALAC (Apple Lossless Audio Codec) format. This preserves the finer details, which can be lost when music is compressed to the 256 kbps AAC (Advanced Audio Coding) format currently used by Apple Music.

The news comes as Amazon announces HD music, currently limited to customers in the US, UK, Germany and Japan. Spotify is also expected to launch a lossless streaming tier later this year.

Apple’s Lossless and Hi-Res Lossless audio formats have high bandwidth demands. As a result, Apple Music subscribers must opt into upgrading from AAC. They can choose different music resolutions for mobile, Wi-Fi or download.

Apple Music’s Lossless music tier begins at CD quality, which offers 16-bit audio at 44.1 kHz. Lossless audio goes up to 24-bit at 48 kHz, which is playable natively on Apple devices.