Apple turns up the speed on iMac 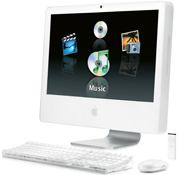 Apple today updated its all-in-one iMac line with the latest Intel Core 2 Duo processors and the most powerful graphics ever available in an iMac. With prices starting at just A$1,599 RRP inc GST, iMac includes faster processors with 6MB L2 cache and a faster 1066 MHz front-side bus across the entire line, and 2GB of memory standard in most models. The 24-inch iMac now offers a 3.06 GHz Intel processor and the high-performance NVIDIA GeForce 8800 GS graphics as options, extending iMac’s lead as the ultimate all-in-one desktop computer for both consumers and professionals.

Packing dual-core performance into the convenience of a striking all-in-one design, the new iMac includes faster Intel Core 2 Duo processors across the line; a 1066 MHz front-side bus; up to 4GB of 800 MHz DDR2 SDRAM memory; and a widescreen flat-panel display supporting millions of colours. For the first time, the 24-inch iMac features an optional NVIDIA GeForce 8800 GS with 512MB of video memory, to deliver up to two times standard performance for graphic intensive applications*. Providing the latest in high-performance connectivity options to quickly and conveniently transfer digital photos, music and video, iMac includes built-in AirPort Extreme 802.11n Wi-Fi networking for up to five times the performance of 802.11g**; Bluetooth 2.1+EDR; Gigabit Ethernet; built-in iSight video camera; a total of five USB 2.0 ports (including two on the Apple Keyboard); and one FireWire 400 and one FireWire 800 port.

The iMac furthers Apple’s commitment to environmental progress with highly recyclable and durable materials including scratch-resistant glass and professional grade aluminium. Every model in the iMac line is rated EPEAT Silver and the power-efficient iMac also meets the stringent Energy Star 4.0 requirements for power consumption.

Every Mac in the Apple lineup comes with iLife ’08, the most significant update ever to Apple’s award-winning suite of digital lifestyle applications, featuring a major new version of iPhoto and a completely re-invented iMovie, both seamlessly integrated with the new .Mac Web Gallery for online photo and video sharing.

Every Mac also includes Leopard, the sixth major release of the world’s most advanced operating system which features Time Machine, an effortless way to automatically back up everything on a Mac***; a redesigned Finder that lets users quickly browse and share files between multiple Macs; Quick Look, a new way to instantly see files without opening an application; Spaces, an intuitive new feature used to create groups of applications and instantly switch between them; a brand new desktop with Stacks, a new way to easily access files from the Dock and major enhancements to Mail and iChat. .Mac members can use the new Back to My Mac feature to browse and access files on their home computer from a Mac over the internet while on the road****.