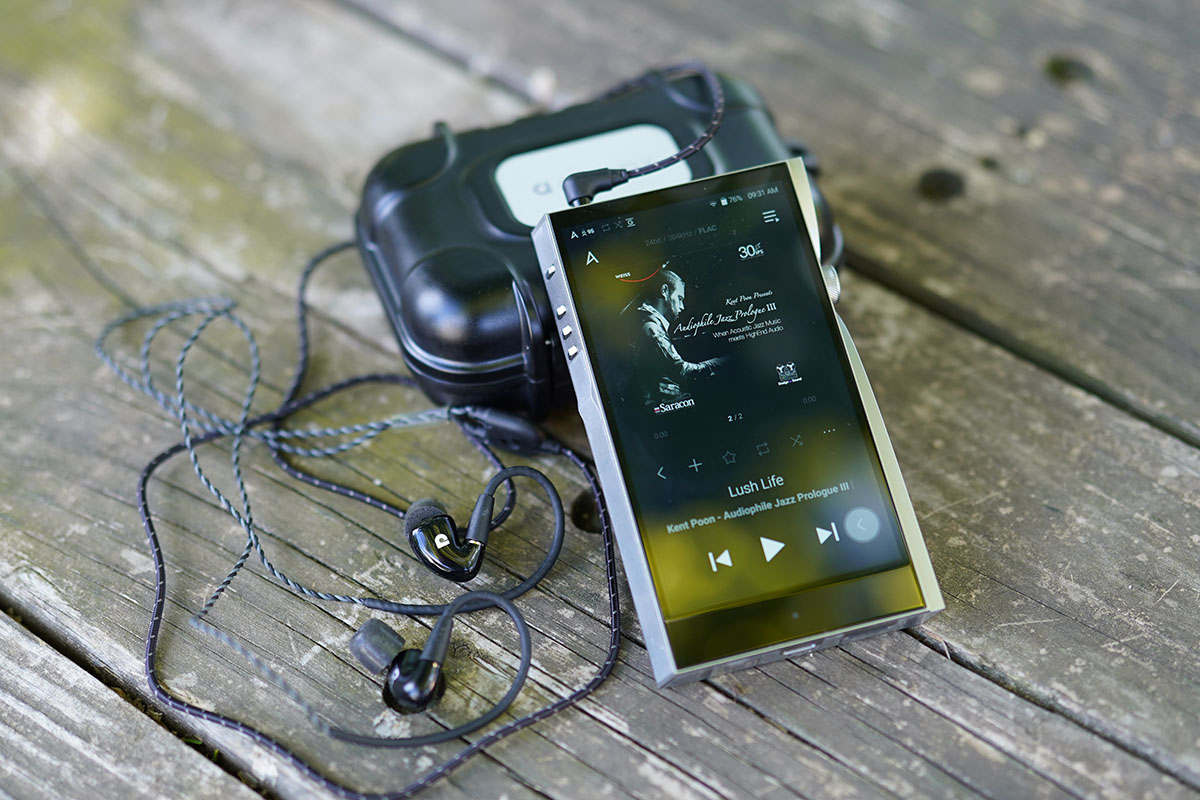 Astell&Kern has quite a few portable music players out there. All of them handle high resolution audio. But I think the Astell&Kern &Futura SE200 portable music player is unique in handling the highest quality digital audio in two different ways – well, four really. On the top of this player are four output sockets, all principally intended for headphones, although they can also be used as line outputs.

You see, there are two separate digital to analogue converter systems in this player, each with its own amplifier. One employs a single AKM AK4499EQ DAC chip, while the other uses two ESS ES9068AS DAC chips. Both systems are extremely high quality. Audiophiles may differ about which is better, so Astell&Kern has given them the choice in the one player. It also allows you to choose the filter curve for each DAC chip. That’s a fairly esoteric subject, to which I’ll return.

The reason for the four outputs is that each can deliver its signal via its own standard 3.5mm output for regular headphones, and via its own 4.4mm 2.5mm TRRS socket for balanced headphones. The AKM output is rated at 3 volts RMS unbalanced, and 6 volts RMS balanced. For the ESS output, the figures are 2 and 4 volts RMS.

The player supports WAV, FLAC, WMA, MP3, OGG, APE, AAC, ALAC, AIFF, DFF, DSF and MQA files. Digital audiophiles would be familiar with all of them. DFF and DSF are direct stream digital formats – that is, a form of pulse density modulation. All the others are various forms of PCM – pulse-code modulation – most of them compressed. MQA is the newest of these formats. It uses advanced techniques to “fold” a wider bandwidth into a regular bandwidth. It also has authentication features.

With the PCM-based formats, the Astell&Kern &Futura SE200 portable music player supports 8, 16, 24 and 32 bits of resolution, and sample rates from 8kHz to 384kHz. I checked it with 16- and 24-bit music with sample rates from 44.1kHz to 384kHz. All worked perfectly. For DSD, it supports regular, double speed and quad speed, otherwise known as DSD64, DSD128 and DSD256, or 2.8MHz DSD, 5.6MHz DSD and 11.2MHz DSD. The playback screen indicates clearly the format of the music being played.

This is quite a large player. It measures 132mm tall, 77mm wide and 16mm thick. It is built in a CNC-created aluminium body. This has sharp corners, so be careful with it. It weighs 271.3 grams according to my scales, without a microSD card installed.

On the front is a good, clear 5-inch 720 x 1,280 touch display. The left side has the power, play/pause, skip forwards and skip backwards buttons. On the right is a rotating volume control. A LED-lit ring surrounds that. It glows different colours to indicate the resolution of the audio: red for 16 bits, green for 24 bits, blue for 32 and purple for DSD.

If I have one complaint about this player, it’s that the volume control could benefit from some kind of speed sensor so that the faster it turns, the quicker the volume change increments. The indicated volume range is from 0 to 150, and it takes quite a few turns to get from one extreme to the other.

On the bottom is a USB Type-C socket for charging and for transfer of music to the unit’s storage. There’s a very generous internal storage of 256GB, of which more than 220GB is available for storing music. Not enough? No worries, because next to that is a microSD card slot, with support for cards of up to 1TB capacity.

A bunch of screen protectors included are included with the unit, and cases are available as optional extras. The battery takes 2.5 hours to charge and is rated at 10 hours of playback time with the AKM DAC, and 14 hours with the ESS DAC.

The Astell&Kern &Futura SE200 portable music player appears to be built on Android, although you won’t recognise it as such. The music player is always loaded – except perhaps when one of the Services is running. These are streaming music players. TIDAL, Deezer and V-Link (a video player). I only used TIDAL. The player doesn’t have access to the play store, but you can add other services by copying them to the OpenService folder on the player and then selecting them from the Services menu in the player.

The player also has Wi-Fi – 2.4GHz only – and Bluetooth 4.2. The Bluetooth supports aptX HD for higher quality sound with compatible headphones. I did not use this. I have a phone if I want to use a Bluetooth connection. It seemed to me a waste to listen to the Astell&Kern &Futura SE200 portable music player with anything other than high quality headphones directly wired to it.

There are a stack of adjustments and tweaks, including a 20-band (!) equalizer. Although, this unsurprisingly doesn’t work on DSD material. DSD is notoriously difficult to digitally process. You can also set the unit to act as a DAC for a connected computer.

I used three different sets of eargear for listening to this unit. The new Sennheiser HD 560S headphones, reviewed here, the Focal Elear headphones, reviewed here, and the Audiofly AF180 MK2 in-ear monitors, reviewed here. The Sennheiser headphones have a fairly high impedance of 120 ohms, the Focal’s are in the same ballpark at 80 ohms. The Audiofly IEMs’ impedance is just 16 ohms. Their three-way design is such that they are not suited for high output impedance headphone amplifiers. A&K specifies the output impedance of the unbalanced headphone sockets at just 0.7 ohms for the AKM one, and 1 ohm for the ESS one. That’s nicely low. (I measured them at 0.76 and 0.97 ohms).

The Astell&Kern &Futura SE200 portable music player delivered beautiful music with all three of them, with excellent control and delivery of detail. I especially enjoyed the player with the Audiofly IEMs. They seemed a particularly fine match. The 16-ohm impedance apparently presented no difficulties. Into 16 ohms, the player proved capable of delivering a little over 0.7 volts RMS from both unbalanced outputs. That works out at around 33mW maximum, or more than 15dB above the sensitivity rating of the eargear, which translates into 119dB with the Audiofly units. Into a high impedance – 300 ohm – test load the player could deliver 2.67 volts RMS (AKM) and 2.18 volts RMS (ESS), for 24mW and 16mW, or nearly 14dB and 12dB.

You’re going to need weirdly difficult headphones for this player not to be suitable. And when they are suitable, the Astell&Kern &Futura SE200 portable music player is essentially a perfect playback device.

For example, right now I’m playing the Holly Cole album Temptation using the Audiofly IEMs. The acoustic bass in the “Train Song” is beautifully powerful and tuneful, and gorgeously integrated into the whole of the sound, while her voice is up close and intimate. A shaker is in the background, and I swear I could hear it moving to and fro and up and down as it’s being played.

And that was just CD-quality FLAC. As was some very different music: Blue Oyster Cult’s album Tyranny and Mutation. On the bluesy number “Baby Ice Dog”, again there was detail revealed that I simply hadn’t noticed before, even though I’ve been listening to this album for decades. How much of that was due to the Audiofly IEMs, how much to the Astell&Kern &Futura SE200 portable music player?

I’ve accumulated a lot of high-resolution content over the years. Audiophile jazz delivered by DSD128 was glorious on this player. As was the Philip Glass-like opening to “Sailor’s Tale” from the Steven Wilson remastered 24-bit, 96kHz version of King Crimson’s Islands.

The conventional view – and it’s one with which I agree – is that PCM digital audio should be low-pass-filtered to remove the ultrasonic harmonics that would result from the step-pattern waveforms if the signal, converted to analogue, was left unfiltered. But there are many schools of thought about the best ways of achieving that filtering. Should there be a gentle roll-off? Or should the output be maintained undiminished to as close as possible to the Nyquist frequency, beyond which it cannot be accurately delivered, and then chopped off hard?

Well, with the Astell&Kern &Futura SE200 portable music player, you can decide for yourself. There are three different filter settings for the ESS output, and six for the AKM one.

I measured frequency response graphs for them. See them scattered throughout this review. A couple of notes are in order. Even though it’s standard engineering practice to filter the output after the digital to analogue conversion, weirdly the idea of leaving the output unfiltered seems to have gathered some adherents of late. I recently reviewed an Italian DAC which sells for more than $10K which skips the filter entirely. And is proud of the fact.

I mention this because the default “filter” setting for the AKM DAC – “Super Slow Roll-Off” – looks to me like a filterless DAC conversion. I checked the output with an oscilloscope and confirmed that to be the case. See the step pattern in what was supposed to be a 1kHz sine wave:

And this is the same sine wave with any of the other five filter settings selected:

My ancient biases push me towards recommending choosing one of the sharp roll-off settings. The “Super Slow Roll-Off” has the high frequency output diminishing substantially within the audible band.

To interpret the frequency response graphs, here’s a key for the filter code for the AKM DAC:

And here it is for the ESS DAC:

The distortion I measured was vanishingly low: 0.0005% with the AKM DAC, 0.008% with the ESS. There was a measurable – although inaudible – difference in the noise performance of the two DACs. The AKM typically delivered – with 24-bit audio – an A-weighted signal to noise ratio of -118dB. Superb! With the ESS DAC, it was -114dB. Superb! This graph shows the difference between the two. Note, that all the noise is below -110dB. That is inaudible. But ramping up of noise into the bass by the ESS output is something I’ve not seen before.