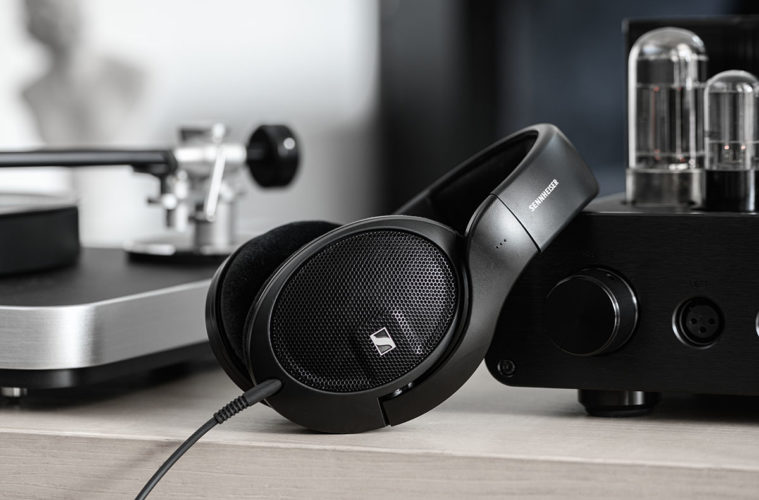 I have the Sennheiser HD 560S headphones on my head as I’m writing this sentence. And, truth be told, I’m pretty excited about what I’m hearing.

Now, let’s back up a bit. Sennheiser has been in the headphone game since soon after the end of World War II. One of its major innovations was open-backed headphones. That is, instead of the vibrating diaphragm which produces the sound being enclosed in a solid-backed headphone cup, its rear was open to the world, with some kind of grate or grille in place for physical protection.  It doesn’t seem like much of a change, but it actually made a huge difference to the character of the sound. It opened up, becoming airy and more realistic. More, dare I say it, “musical”.

The downside is that with open-backed headphones, you inevitably share your music with those around you, and they are relatively transparent to environmental noise.

Of course, Sennheiser produces plenty of closed-back headphones. But the HD 560S headphones are very thoroughly in the open-backed tradition.

I’m not sure of the size of the cone Sennheiser uses in these headphones. I have seen reports of 38mm. Most companies boast about this, but I don’t think Sennheiser mentions it on its product page. It does talk of a “specialized polymer blend” and a “sophisticated damping system”. I’m not sure how these contribute to results, so let’s just talk about results in the form of specifications.

Frequency response? How does 6 hertz to 38,000 hertz (at -10dB) sound? Impressive. The impedance of 120 ohms is fairly high, but should result in them being relatively immune to the performance impacts of high impedance headphone outputs.

For some reason I do not understand, Sennheiser tends to rate the sensitivity of its audiophile headphones as a decibel output for a one-volt RMS input at 1kHz. Most other brands use decibel output for a milliwatt of input. The figure Sennheiser gives is 110dB for one-volt RMS of input at said 1kHz. Assuming both that the nominal impedance of 120 ohms applies at 1kHz and that the headphones offer first class linearity, their sensitivity works out to be 100.8dB for 1mW input. Let’s say 101dB. That puts them in roughly the middle of the range of headphones for sensitivity. We shall talk more about that later.

Finally, one specification Sennheiser gives that most makers would not consider: distortion. Admittedly, it’s only for one frequency at only one output level, but that’s way more than most. For 90dB of output at 1kHz, Sennheiser tells us that these headphones produce less than 0.05% total harmonic distortion. That’s actually kind of amazing. That’s an electronics-level figure, not one you’d expect for sound transducers. I’d normally expect a figure of closer to one per cent.

The headphones are quite light on the head. They weigh just 240 grams. The grip on my head was firm, but not excessively so, and it was softened by the luxurious feel of the velour earpads.

In recent times Sennheiser’s HD 660S headphones – priced at more than twice these ones – have been a hit in the audiophile community. Sennheiser notes that the sound of the HD 560S headphones “is rooted in the reference-level DNA of the beloved HD 660S”. That got me interested in the model numbering used by Sennheiser. What’s the difference between a 5 and 6? What has “S” to do with anything? So I asked.

Sennheiser replied with the following, which I share mainly because it’s so rare for such a question to be answered:

Up until 1993 all open audiophile headphones from Sennheiser were 500 series, for example, the ever-popular HD 540. With the release of the HD 580 in 1993 we made a massive jump in tonal accuracy and lowest possible distortion thanks to our laminate technology and computer-aided membrane design. We made this large difference more transparent with a variant of the HD 580, the now legendary HD 600 from 1997. From then on, the 500 series were the affordable “nearly-audiophile” headphones for home use.

The HD 560S in particular is much more performant than the other existing and prior 500 series headphones. We chose the naming scheme to show that it is a close relative to the reference HD 660S, basically a little brother. It is much closer to the 600 series than the 500 series in terms of technical capability and tonality. The “S” is more aesthetic than functional, since 2015 we use it for audiophile products of the next generation.”

A note on cables

One final note: the cable. This is detachable. At the far end is a 6.35mm stereo jack (aka 1/4”). A short 6.35mm to 3.5mm adaptor cable is included. I like that. Most have the cable terminated with a 3.5mm plug, possibly with an adaptor to 6.35mm included. The way I see it, audiophiles are more likely to be plugging into a 6.35mm output. So avoiding a 3.5mm to 6.35mm adaptor is preferable.

At the headphone end is a the 2.5mm plug – you lock it in and twist to engage a small lug. This has four poles: TRRS. Since there’s no inline microphone, I’m guessing that it supports balanced headphone operation. If you can find a suitable cable. I have a query in with Sennheiser on this point and will report back when I get an answer.

At the outset I said I was pretty excited about what I was hearing. I’d had the headphones out of the box and on my head for only a couple of minutes at that stage. I was streaming music from TIDAL – Master quality of course from the TIDAL app on a Mac Mini via a DAC and a superb little headphone amplifier – to these headphones. The music was “Danza” from the inaugural self-titled album from 1970s classical-rock fusion group Sky. When it, ahem, kicked in, the kick drum exhibited a nice tight thump, while the acoustic guitar was open, precise and remarkably present.

Sometimes I think of audio reproduction performance as something to be measured on two almost independent axes. On one are traditional measures such as frequency response – more specifically, the balance of different frequency bands with respect to each other, which so much determine the sound signature. That also includes things like distortion.

On the other axis is something I call magic. It doesn’t lend itself so clearly to analysis, but you can have highly coloured speakers that are somehow exciting and present and immediate, despite their drawbacks.

As “Reference-grade headphones for analytical listening sessions”, the Sennheiser HD 560S headphones manage the first axis rather nicely. Their sound signature is, basically, immaculate.  As for the second axis, they are certainly to the right of the halfway point. They are verging on magical.

Now, by a modest coincidence, those HD 535 headphones cost me $319 back in July 1997. Which is the pretty much exactly the same amount – nominally – as the HD 560S headphones today. (According to the Reserve Bank of Australia, that would be $550 adjusted for inflation.)

Now, a 120-ohm impedance combined with a sensitivity of 100.8dB might lead to volume problems with low output devices. I spent most of my listening time with these headphones using an iFi headphone amplifier that has sufficient performance to fry your ears, should you want, driven by a very high performance DAC connected to a Mac Mini. But what about more modest portable equipment? Well, how about an iPhone 8 with the Apple dongle for producing analogue sound? I’ve measured the performance of this thing. It has an output impedance of around 1.5 ohms – that’s pretty good – and a maximum output of just short of one-volt RMS into a high impedance load, and not much less into 300 ohms. I’m figuring it would still be at least 900mV into 120 ohms, given that the dongle manages to pull off 600mV into a mere 16 ohms. That would mean something like 7mW maximum, or just over 9dB above the sensitivity figure of the headphones. That is, 110dB.

In practice, these headphones worked fine with the dongle. As I’m writing, I’ve got The Who’s Who’s Next playing on the iPhone through the dongle and headphones, sourced from TIDAL. The level is set at one notch short of maximum, but that’s enough.

And I have to say that the music sounded great. Moon’s drums were powerful but controlled and the tonal balance was pretty much perfectly spot on.

I doubt that you’ll get anything approaching the sound quality produced by these headphones without spending at least twice as much. Usually when I’ve finished a headphone review, they go back into their box. Too much clutter, you know. But not these ones. They’re going right on my headphone rack so that they’re handy for my next headphone listening session.