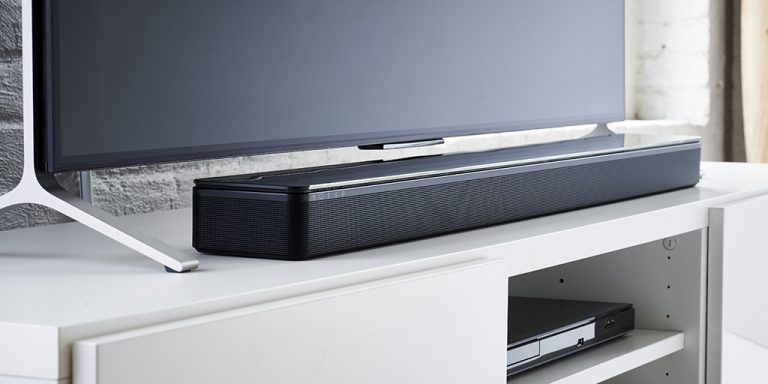 Bose makes bold claims for its new SoundTouch 300 Soundbar, saying it “crushes the limitation of single speaker performance for music and movies” and “delivers the best audio performance of any soundbar its size, no matter what you’re listening to”.  But how good is it, really?

An audition in a Sydney hotel suite reassured that it’s capable of any reasonable (and some unreasonable!) volume levels you’d want in an average sized living room, with sound that was crisp and dynamic. It was as happy producing the crash and bang of a rampaging T-Rex in home theatre mode, as it was the empty acoustic space around voices and instruments on music material, so there’s good versatility on offer here, and all from a speaker with a light footprint (97.8 x 10.8 x 5.7cm WHD).

Most impressive, however, is the unit’s PhaseGuide, a design that combines digital signal processing with a narrow physical channel inside the cabinet, just behind the front grille, to steer sound between left and right drivers and create the impression of there being discreet speakers where there are none. This was genuinely effective, providing convincing separation of front stage sound information in multichannel soundtracks across distinct left, centre and right positions in the listening space.

As a single speaker designed to simulate the front three channels in a 5.1 surround system, the Bose SoundTouch 300 is a success.

Design-wise, the SoundTouch 300 has an appealing perforated wrap-around metal grille and a glass-top finish, a styling cue consistent with the company’s newly released Lifestyle 650 and Lifestyle 600 home theatre systems.

Connections include optical audio, micro USB, HDMI input with 4K support Ultra HD video sources, and HDMI output with Audio Return Channel for sending audio and video from connected Blu-ray, games consoles and pay TV boxes to a connected TV, then routing the sound back to the speaker for playback. There’s an Ethernet port to receive firmware upgrades, plus 3.5mm jacks for setting up Bose’s ADAPTiQ sound calibration system and a Bose subwoofer.

Part of Bose’s wireless multiroom audio family, the SoundTouch 300 joins with other SoundTouch-enabled speakers to distribute sound over your existing WiFi network to many rooms. Control of music to each room or zone is via an app, with music sources including stored digital collections, as well as streaming services like Pandora, Spotify and internet radio. Direct streaming from Bluetooth and NFC devices is also supported

Whereas previous Bose Soundbar models included a wireless subwoofer (‘bass module’ is Bose’s preferred terminology), the Soundbar 300 forms part of a modular package, where additional components can be added according to your needs… or as funds become available.

With a cosmetically matching glass-top, the $999 wireless Acoustimass 300 bass module (black finish only) is the recommended match for the SoundTouch 300, and the $449 Virtually Invisible 300 wireless speakers can be added to provide surround.

The modular strategy has the benefit of making the entry point into a Bose ecosystem of sound appear more affordable, and mirrors the approach of wireless audio category leader Sonos.  Bose clearly has that brand in its sights with the SoundTouch 300, with pricing pegged level with the Sonos Playbar at $999.