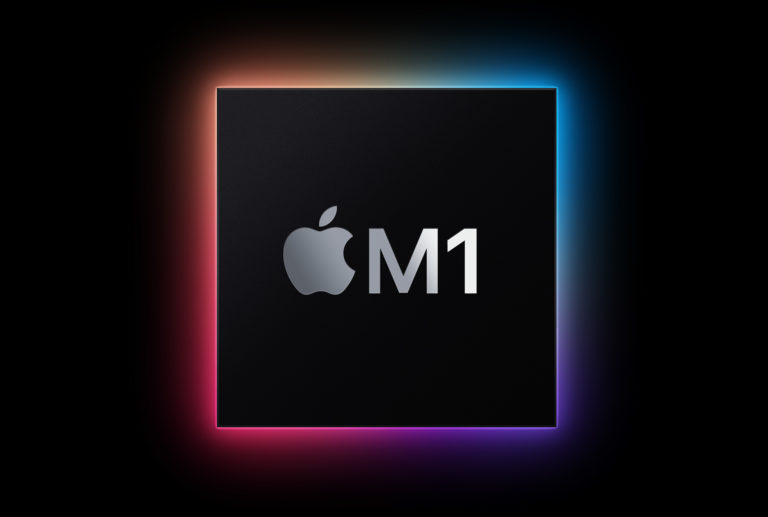 In a major ‘One Last Thing’ announcement, Apple unveiled its new M1 chip that will be featured in new versions of the MacBook Air, Mac Mini and MacBook Pro computers. This chip replaces the Intel Central Processing Unit (CPU) that Macs have been running on for more than a decade.

The M1 chip is a major step forward for Apple to become less reliant on external suppliers. This mirrors the Apple-made ‘Ax’ series of chips found in iPhones and iPads, whereas most Android phones use chips by Qualcomm and a few others.

What’s the big deal about the M1 chip?

A central processor is essentially the ‘brain’ of a computer and determines how quickly it can perform tasks such as run software, make calculations, play games or draw intricate designs and graphics. Most consumer-grade computers use processors from a handful of manufacturers. As a result, nearly all notebooks and PCs are stuck on a similar playing field in terms of price ranges, capabilities and performance.

Intel, the world’s largest PC chip maker, needs to ensure that its chips are versatile. This means they must run software written decades ago and provide leading perfomrance for modern PCs and Macs. As a result, Intel’s new chips still need to run ‘x86 instructions’, which is the same as decades old 486 and Pentium chips. In simple terms, retaining this legacy architecture holds them back somewhat in terms of the performance and power efficiency they can deliver today.

By making its own chips, Apple has essentially created a playing field entirely its own. Its processors only need to be compatible with the latest Apple hardware and software. Also, Apple can release new computers on its own terms rather than waiting on Intel’s product road map and stock.

Apple’s own testing has shown that the M1 can deliver up to three and a half times faster processing (CPU), six times faster graphics (GPU) and up to 15 times faster machine learning capabilities – with battery life up to TWICE as long as before. So, not only considerably faster, its computers gain a huge power efficiency boost. Of course, Apple’s claims will need to be tested in the real world against both older Intel based Macs and Windows computers. Still, these gains are quite substantial and could put Mac computers well above the competition by delivering performance and battery life that can’t be matched for the money.

The M1 is the most powerful processor that Apple has ever made. It’s roughly based on the A14 chip found in iPhones and iPads. As the M1 will become a family of chips, we can expect to see some variants too. Apple measures its capability in terms of ‘performance per watt’ or how fast it is per watt of energy. As energy consumption links to battery drain, this is very important. Apple believes it has the “world’s best CPU performance per Watt” but we’ll need to test out its claims.

Design-wise, the M1 chip incorporates many sub-components normally found in separate chips into a single unit. The benefit is that communication is faster between the different integrated parts of the chip. This also requires less energy.

The M1 consists of an 8-core Central Processing unit (CPU), an 8-core Graphics Processing unit (GPU), a 16-core Neural Engine for machine learning tasks. It is made on a 5-nanometre scale, which is the latest and smallest standard for consumer chips with 16 billion transistors overall. There’s also a unified memory architecture for efficient, low-latency communication when retrieving and storing information.

Current Apple software will need to be rewritten to run ‘natively’ on M1 Macs. Using a new compiler, developers can create what Apple is calling a ‘Universal’ version of their programs to run on both Intel and M1 computers.

Older software that has already been written for Intel and won’t be updated to a Universal version can still run on new M1 Macs. Apple has created Rosetta 2, which is an ’emulator,’ which intelligently ‘translates’ the Intel-coded software in real-time so it can work on the new Macs.

Programs written to run natively on M1 equipped Macs will always run the fastest and benefit most in terms of increased battery life. However, there’s likely no issue when running older software and it should be a fairly seamless experience. Eventually, most software will be written to work on the M1.

Apple has also announced that MacOS Big Sur is built specifically for M1 machines, and all of its software such as Mail, Safari, Pages, Numbers, Keynote, etc., will be available in M1 versions. Another benefit is that apps written for iPhones and iPads can run on M1 machines without any emulation. This could help bring a lot of popular apps to the Mac.

At time of writing, there’s no indication that Microsoft will provide Universal updates for its Office 365 suite, however Adobe is working on native M1 Creative Cloud updates there’s no immediate delivery timeframe.

[UPDATE] There is now a M1 version of Adobe Photoshop that can be found via Adobe’s Creative Cloud manager under the ‘Beta’ menu.

What does this all mean?

When it’s all said and done, the M1 brings amazing performance and battery life increases to the Mac. If the claims are accurate, these machines will certainly outclass the Intel/Windows competition. And considering the huge ‘bang for buck’ advantage that they deliver, plus the new M1 equipped models will sell for the same price as previous Intel versions, there’s a LOT more value on offer from a brand that is known to be pricy.

For the latest on the new M1 Macs, we’ve included a summary of what’s new as well as Apple’s performance claims and some of the new things that they can do compared to the previous generation. We’ll be reviewing them at GadgetGuy.com.au soon so watch this space! Orders start this week with in-store stock and deliveries from next week.

The new Air no longer needs a cooling fan inside so it operates completely silently, according to Apple.  There are also updates to the storage controller and flash memory for faster SSD (solid-state hard drive) performance. There’s a new Image Signal Processor for better camera image quality. For comms, the latest Wi-Fi 6 and faster USB 4 are included.

When compared to the previous generation, the M1-powered MacBook Air can:

Otherwise, the appearance of the new Air is the same as the pervious model. The RRP is $1,599.

The new 13 inch MacBook Pro gets a new active cooling system. This enables the M1 to run faster than the version in the MacBook Air and provides a more ‘pro’ experience. It also gains two studio-quality mics for clear recordings and calls. There’s the latest camera ISP in the M1 chip, which enables sharper images and more detail in shadows and highlights on video calls. Two Thunderbolt ports with USB 4 support are included.

When compared to the previous model, the M1-powered 13-inch MacBook Pro can:

The MacBook now holds the title of having the longest battery life ever on a Mac, according to Apple. It has a starting price of RRP $1,999.

There’s an advanced thermal design used to maximise the performance of the M1 chip. Also new is support for up to two displays including Apple’s Pro Display XDR in full 6K resolution. Then there’s Wi-Fi 6 for faster wireless performance. Lastly, the Mini gains the ‘Secure Enclave’ in the M1 for best-in-class security.

When compared to the previous generation, the M1-powered Mac mini can:

For more on the Apple M1 chip, visit the product page here. Other Apple news is here.