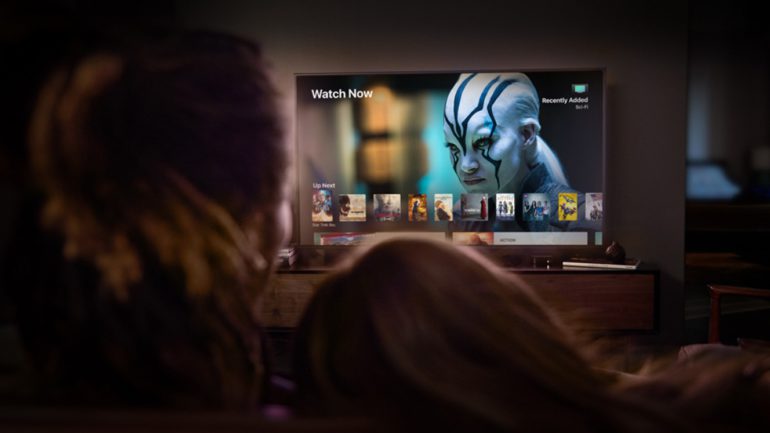 The most exciting feature on Apple TV’s latest tvOS 15 update is support for headphone-based spatial audio. This aims to replicate the ‘experience’ of a proper home theatre speaker setup inside a pair of cans.

We’ve been testing out the feature since the public beta and were pleasantly surprised. It’s certainly a step up over regular stereo, especially when watching content from services like Amazon Prime Video and Disney Plus. When paired with an AirPods Max headphones, it’s one of the most convincing surround sound experiences you can have.

That said, the implementation isn’t a total homerun and you will need specific gear to get going. Let’s dig in.

Apple spatial audio takes the multichannel signal from supported movies and televisions shows and adjusts the frequencies that each ear hears to make it sound as though they are coming from around and above you. It also uses the accelerometers and gyroscopes in the AirPods Pro and AirPods Max to track your head movement and adjust the audio dynamically relative to the screen. This means that even if you turn your head, dialogue will still be anchored to the physical location of the actor on the screen.

The feature first arrived on iPhones and iPads, but it feels more at home on the big screen with the Apple TV.

But none of them sound as convincing as Apple’s implementation, particularly when paired with the AirPods Max.

The Tomorrow War on Amazon Prime Video boasts an excellent Dolby Atmos mix with objects constantly bouncing around through every channel. Within the opening minutes, a time jump sends hundreds of people dropping from the height channels and crashing into buildings with the wind whipping past your ears before being submerged under water – all while rain is pouring overhead. While the sense of verticality isn’t as dramatic as you would get on a proper Atmos setup, Apple’s spatial audio implementation on the AirPods Max still did a great job of opening up the soundstage and providing a sense of directionality for all the on-screen action.

Another challenging test scene is the first alien encounter around the 49 minute mark which has a nice mix of light ambience to build tension before a gunfight breaks out, spiralling down flights of stairs with a hail of bullets firing in every speaker. The bass that accompanies every gun shot hits hard and deep, and challenges the best subs out there and the AirPods Max handled them with aplomb without overwhelming the rest of the action.

We sampled a range of content across Prime Video, Disney Plus, Netflix and Apple TV+ and found movies and tv shows that support a multichannel mix, whether it be 5.1 or Dolby Atmos, benefited the most from Apple’s headphone-based spatial audio. The audio really opens up, giving all the effects in a scene better definition and direction while also making the dialogue more intelligible.

You aren’t just limited to streaming apps either. Popular local media playback apps such as PLEX worked great, although you will need to change the player to the ‘older version’ for it to work within the app’s settings.

Headphone-based spatial audio on Apple TV also works with movies and television shows that don’t sport a native surround sound mix. Apple calls this feature ‘spatialise stereo’. However, we found the effect less than convincing, and mostly artificial sounding, as there’s more guesswork involved in expanding a stereo soundscape. As such, we recommend leaving spatial audio disabled when viewing content that is encoded in stereo only, which is easy enough to do within the tvOS control centre menu.

Switching to the AirPods Pro, audio sounded more confined and ultimately less impactful but that’s to be expected given we’re talking about such small and sleek earbuds. You still get the sense that audio is swirling around you as opposed to it being piped directly into the left and right channels but the effect is much more subtle than what we experienced with the AirPods Max. Unfortunately, spatial audio for movies and tv shows isn’t supported on the original AirPods or the AirPods 2.

It’s worth noting that while spatial audio worked reliably on the beta version of tvOS 15 with a range of streaming services, we found the public release would default to stereo output over headphones. To get around the issue, we had to manually turn the feature on and off while the content was running before it would switch back to multichannel audio as its spatial audio source. It’s likely these issues will be ironed out as tvOS 15 matures and more apps are updated to support the feature.

Apple’s implementation of headphone-based spatial audio for movies and tv shows provides a captivating listening experience that is a step above other implementations we’ve heard including Dolby’s own Atmos for headphones. While it won’t replace a quality 5.1 or 7.1 surround sound speaker setup, it provides a capable alternative for those times when it isn’t practical to have your speakers shaking the house.

However, the feature only works with the $399 AirPods Pro or $899 AirPods Max as well as the first and second generation Apple TV 4K boxes, making it a fairly high barrier to entry. It’s a shame that Apple doesn’t provide an option to experience it without the head tracking which would open up compatibility with other Bluetooth headphones as it did with spatial audio support on Apple Music.

Still, if you have the necessary equipment, Apple’s headphone-based spatial audio should be your go to private listening option for those all important late night movie watching sessions.