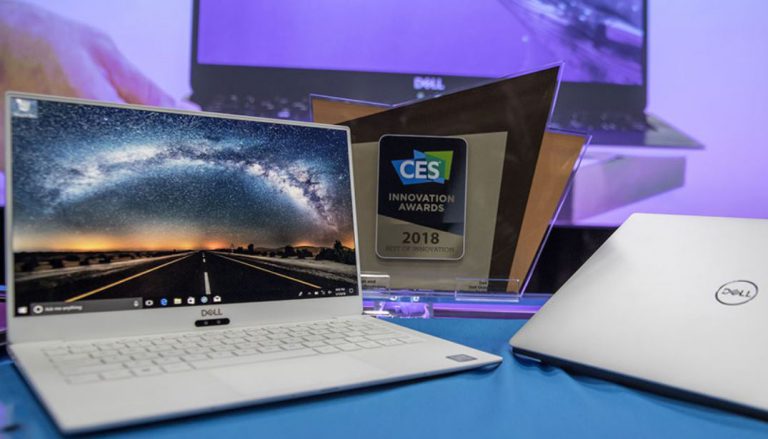 Dell unveiled a suite of new products and software to help address the myriad ways people play and work. Dell also highlighted some of the hidden innovations in these products designed to improve performance, functionality and the overall user experience.

“With Dell, the incredible product design you see on the outside makes for gorgeous machines, but one of our most striking advantages comes from the innovation within. Beauty and brawn lurk beneath those beautiful exteriors, revolutionising and redefining personal computing, and giving people experiences they want – and some they’ve never dreamed possible,” he added.

The latest XPS 13 is improved in every conceivable way and was just named a CES 2018 Innovation Award honoree.

Along with its next-generation InfinityEdge 4K Ultra HD display, the XPS 13 adds a dazzling Rose Gold with Alpine White woven glass fibre interior as an option to traditional silver and black, with narrower borders and up to 80% more thermal headroom.

Inside its thinner, lighter design, the Dell Power Manager delivers power just when you need it, while GORE Thermal Insulation, the same silica aerogels used in the Mars Rover to diffuse and dissipate heat, introduces an innovative material into the thermal design to keep the system cool while it works hard.

GadgetGuy says the 2017 XPS 13 was seriously tempting, so the improvements make this a real winner.

Balancing high performance with a sleek design, it is one of the smallest and thinnest 15.6-inch 2-in-1 available with the horsepower to run content creation apps, process huge files and play AAA games while featuring touch, pen, an innovative maglev keyboard and the screen real estate that creators need.

In addition to a mouse and keyboard when using a computer, users generally have a smartphone. Dell has introduced Dell Mobile Connect, a software solution that enables complete wireless integration between Dell PCs and smartphones (iOS and Android). Users can make calls, send texts, get notifications and even fully mirror their phones to interact with all their mobile apps.

Immersive experiences with Dell Cinema on selected XPS and Inspiron

People are increasingly watching video content on their PCs with an increasing expectation of a cinematic experience – studio sound and visual quality, as creators intend.

Pictures come to life in luminous, vivid colour and both monitors support HDR-content playback for a CinemaColor experience, producing colour depth, clarity and contrast in a virtually borderless InfinityEdge display for strikingly realistic images. With a sleek profile at only 5.5mm at its thinnest, both monitors deliver peak brightness of 600 nits.

Alienware is collaborating with NVIDIA and Oculus to create a new category of competitive virtual reality (VR) eSports. Over the last two months, more than 200 participants across 14 different cities competed on Alienware systems to get the fastest time on Survios’ latest VR game, “Sprint Vector.”

Adding to the ease of one-stop shopping, Dell is the first PC provider to sell the consumer version of HTC Vive VR headsets in addition to offering the HTC Vive Business Edition. Dell is also confirming a deal with Meta to offer its immersive augmented reality (AR) headset.

Dell has announced what it claims is the world’s most compact Thunderbolt 3 storage device and one of the fastest portable drives available, the Dell Portable Thunderbolt SSD 1000 (1TB) and SSD 500 (500GB).

Dell’s new Alienware Command Centre merges system settings, content and other functions into a simple and elegant interface. It helps novice to experienced gamers optimise and tune PCs and peripherals to their unique gaming needs. Now a gamer can access her or his game library from all sources on a PC, easily create custom profiles for each game and squeeze out more performance with power management and overclocking tools.

Concurrently hitting the market is AlienFX 2.0, the second generation of Alienware’s proprietary in-game lighting system that works across Alienware PCs, mice and keyboards. The Alienware Command Center provides even more customisation of individual keys and key groups with more than 16.8 million colours in each lighting zone.

Dell and Alienware have long invested in the eSports industry: supporting the first Championship Gaming Series in 2007; working with Team Liquid, Team Dignitas and ELEAGUE; and most recently working with Tobii to infuse eye-tracking technologies into eSports tournaments revolutionising the spectator experience. Alienware currently is the hardware of choice for Team Liquid, who have selected Alienware peripherals (mice, keyboards, monitors) for use in training and competitions.

Dell has announced the launch of the new Alienware eSports Training Facility for Team Liquid setting a new standard for a dedicated eSports training centre.

The new 8,000 square foot facility in Los Angeles will serve as Team Liquid headquarters, supporting multiple competitive teams with an in-office chef, sports psychologists, nutritionists, dedicated coach and analyst and training spaces– with everything powered by the newest and most powerful Dell and Alienware technology. Athletes will be training for high stakes competition while design teams, video crews and coaching staff make use of monitors, touchscreen displays and more to break down the action and create content for fans.

While the majority of the updates are evolutionary – faster, cheaper, better – Dell has looked at how people use these products and applied its smarts to improving the user experience. It will be interesting to see how Mobile Connect develops as the lines between Android and Windows blur even more.

PS – apologies for the lack of images in this article but the media kit was barren!