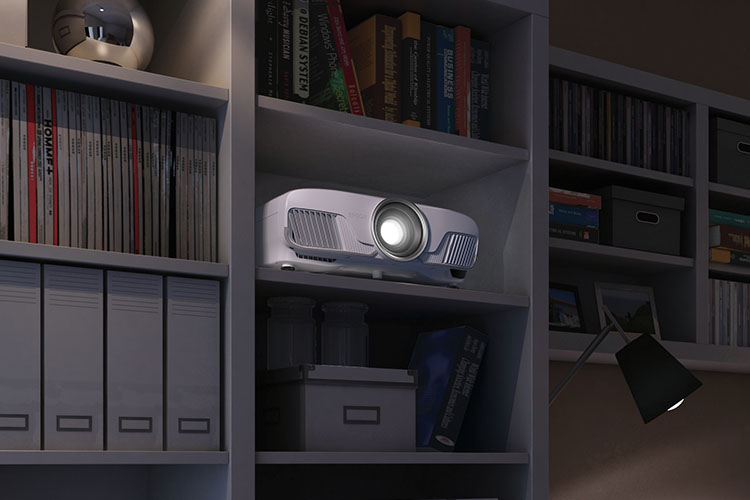 Sydney, 27 March 2019 – Ahead of their appearance in stores next week, I had a chance to spend some time one of the new Epson 4K PRO-UHD home theatre projectors. Accompanying the projector was Paul Haddad, the Epson product manager responsible for this unit. He was able to fill me in on some of the details.

Even though there are some amazing TVs pushing into the 80+ inch range, for a truly large screen a projector remains the only option. And a bigger screen makes higher resolution all the more important. But even as large screen TVs are now coming in 8K, projectors have been slow to appear with “real” 4K capabilities.

Which brings me back to Epson. You read about it here mostly in connection with its printers, one of the biggest in the home theatre projector business, both here in Australia and internationally. For some years it has offered home theatre projectors with a kind of UltraHD capability. They would accept a UHD signal and they’d do something with it. But they used three full HD (1,920 by 1,080 pixel) panels in these projectors, not UHD (3,840 by 2,160 pixel) ones.

(Unlike most home DLP projectors, LCD models use one panel for each of the three colours.)

They attempted to create UltraHD by using a “pixel shift” technology. In short, this moves the panels the tiniest amount four times during the display of each frame. This allows it to paint four on-screen pixels for each actual pixel on the panels. And I shall confess to being quite unimpressed with earlier efforts. Part of the problem, in my opinion, was that all these pixels heavily overlapped each other. Some pretty heavy sharpening processing was applied by these projectors to try to overcome this issue, but its main effect was to distort the image.

When UltraHD Blu-ray first appeared, the buzz was mostly about the enormous number of pixels. But in the real world, that was probably the least of the benefits that UltraHD had to offer. In fact, a well-produced standard Blu-ray looks pin-sharp even on 65-inch TVs, and very impressive on a large projection screen.

More significant to subjective impressions of picture quality – and that’s what really counts – are a couple of other improvements offered by UltraHD Blu-ray: HDR and wider colour gamuts. High Dynamic Range allows, in theory, brightness ranges from dead zero nits all the way up to a daylight-like 10,000 nits. No home device can go to anything like 10,000 nits yet. The brightest top out at 2,000, and many quality TV models only barely reach 1,000, or even a little less.

Projectors, typically, are even less bright.

But HDR also allows for finer graduation of intensity within the visible brightness levels. And that means that there’s no “banding”. That’s where what should be a smooth transition in colour can’t be achieved on the screen. Instead, what’s sometimes presented is a “paint-by-the-numbers” look, with flat areas of slightly different shades abutting each other. And that, of course, is not how things look in real life.

The smoothness offered by HDR is assisted by the wider colour gamuts, or ranges, also available on UltraHD Blu-ray.

With its 4K PRO-UHD range of projectors, Epson is emphasising these latter features. Traditional picture sources and display devices use only 8-bit colour and brightness. That limits them to 256 levels. UltraHD Blu-ray (and things like HDR-encoded Netflix) use 10 bits. That bumps things up to 1024 levels and a billion colours.

The new Epson 4K PRO-UHD projectors use 12 bits of resolution in their signal processing. Their display panels support 10 bits. And they also support 100% coverage of the DCI-P3 colour standard. That standard – DCI stands for Digital Cinema Initiative – is what is used by movie makers and the cinema industry to define colour coverage. Those two improvements allow these Epson projectors to deliver those smooth transitions.

But what about brightness and resolution?

Over the past few years I’ve frequently expressed disappointment to Epson that it hasn’t released a native UltraHD projector, especially since it is such a big player in the field. But at this event, Mr Haddad assured me that it does make such projectors. It sells them for certain professional installations. Pricing is of the order of – hold onto your seats – $90,000!

Well, if Epson has 4K projector panels, why not downsize them or something and get the price down to get them into home theatre projectors?

Paul Haddad said there are two reasons for that. First, getting the price down enough to fit them to sub-$5,000 projectors would be quite the ask. And second, Epson (like me) considers the ultimate UltraHD resolution secondary in importance to consumers. He made the point that 4K projectors can’t be as bright, all other things being equal. The reason is the gaps between the pixels. They are thin, and they can’t be made thinner. So if you have more pixels, on a panel the same size, a greater proportion of the area is the dead gaps. That can be overcome by using brighter light sources, with their associated costs (that $90K projector can deliver 12,000 Lumens). Instead, Epson has prioritised brightness. The Epson 4K PRO-UHD projectors are rated at up to 2,600 Lumens of output.

That, it believes, allows it to get closer to the true HDR experience, with reduced “crushing” of whites at the top end of the scale.

Some years ago I created a test pattern specifically for checking the ultimate resolution of UltraHD displays. Mr Haddad ran the pattern for me on the projector, and I’m pleased to report that, while it doesn’t resolve UHD pixels down to the sharpness of what you can see with a UHD TV, it does deliver at least some degree of separation between the ultra high definition pixels. And that means better-than-full-HD resolution.

There didn’t seem to be quite the pixel-overlapping issues I’ve previously complained about, and on the test pattern there was no evidence of quality-damaging sharpness “enhancement”.

The purist in me still wants to see more native 4K projectors. However, it’ll be quite a while before such things appear at the $4,999 price-point of the Epson EH-TW9400W home theatre projector. That projector, the Epson EH-TW9400W, is the top model in the Epson 4K PRO-UHD range. It features such things as a 5,000 hour lamp life and a wireless connection for the UltraHD video feed. The non-wireless Epson EH-TW9400 will soon be available for $4,799, while the more basic Epson EH-TW8400 will cost (UPDATED) $4,099.

These projectors should be appearing here on Epson’s website in the next week or so.