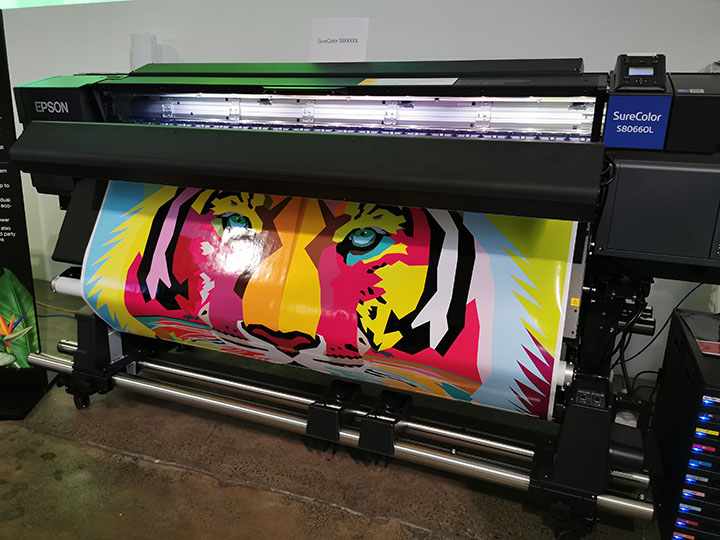 Sydney, 29 October 2019: In one of those industrial-turned-trendy areas in Roseberry, Sydney, a bunch of us writers attended the launch of the latest Epson printers and projectors. Several of these are quite remarkable in different ways.

Bright? You want bright? A large chunk of the wall of the venue was very brightly illuminated by the mighty Epson EB-K30000UNL projector. This was a monster. I’d guess that its more than a metre on each of two dimensions, and something like fifty kilograms in mass*. There was a time when long-lived laser light sources – 20,000 hours is the promise – were relatively low output affairs. Not this one. The “30000” part of the model number is a reference to its brightness: an astonishing 30,000 lumens. To be clear, modern home theatre projectors are typically rated at 2,000 to 3,000 lumens (and it wasn’t many years ago that sub-1,000 lumens was the norm).

So it isn’t surprising that Epson says the EB-K30000UNL projector is suitable for screens up to 1,000 inches!

But a monster like this tends to be out of the reach of most of us. Another projector that caught my eye was the Epson LS500. This also uses a laser light engine for super long life, but rather than being a venue projector, this one is very much intended for home theatre use. It employs Epson’s 4K enhancement technology to generate something like 4K performance from the company’s FullHD panels (Epson uses a three-panel design). They’ve been around for a few years. But this design is a super short-throw projector. That means that the projector sits something like twenty centimetres from the screen, not across the other side of the room.

That has its advantage and disadvantages. The primary one of the latter is that you must be very precise setting things up. Move an ultra-short throw projector by a millimetre and it throws the picture right off. But the advantage is no shadows. As you can see from the picture of our leader, Valens Quinn, even that close to the screen (at my urging), he casts a shadow only at the very edge.

It won’t surprise you that Epson produces rather more that home and office printers, although of course it does those. Indeed, it turns out that the “EcoTank” innovation in Epson printers from a few years ago has proved to be something of a hit. The idea there is that instead of selling a printer dirt cheap, and then trying to recoup the cost via expensive consumables – principally ink cartridges – you pay full freight up front and get enough ink to run the printer for a year or two. And new cartridges costs just a few cents per page. Since their introduction, Epson has sold 40 million of them.

Do they work as promised? I don’t have huge printing requirements, but I am still using this Epson printer which I reviewed nearly two years ago. The colour ink tanks are still more than half full, while the black one is one quarter full. And I still have a full, unopened set of refill bottles that came with the printer.

Epson was at pains to emphasise the efficiency of its printers. It notes that its micro-piezo head technology uses up to 87% less power than laser printers, and also less power than competing inkjet technologies, which it says use heating to eject ink. It says that the micro-piezo heads in Epson printers squeeze out the ink with pressure, allowing them to start printing almost immediately.

But the stunning products at the launch were the new large format printers. For the first time Epson has a couple of models with not three, not four, not six, but twelve ink cartridges. The SureColor SC-P7560 and SC-P9560 Epson printers are designed with artists and imaging professionals who need extremely accurate colour on large prints. How large? The SC-P7560 has a 24-inch-wide carriage (61cm) while the SC-P9560 is 44 inches (1.1 metres) wide. And both support rolls, so prints can be many metres long.

They’re for printing on paper. But the SureColor SC-F9460 and SC-F9460H are dye sublimation Epson printers, intended for printing on textiles and giant posters; they both have 64-inch (1.62-metre) carriages. The “basic” model features four colours. You can get a sense of the industrial scale here because it holds twelve litres of ink in two four-colour banks. The model with the “H” suffix adds an additional two colours (and three more litres): yellow and pink fluorescent inks for eye-popping banner work.

There’s something about dye sublimation printers which stands apart from competing technologies. To my eye, it’s the way that colours abut each other with an analogue flow that looks like they’ve been painted on, rather than put in place by a matrix of dots. Have a look at the photo to see what I mean.

There were plenty of other things on offer, such as business-orientated office copiers/collators, label printers and of course some more projectors.

Keep in touch with these products as they roll out on Epson’s website here.

* Epson confirms a mass of 49 point something kilograms, and 1.2 by 1.2 metre measurements. But you probably won’t buy this one for your home theatre room. Cost is around $150,000.