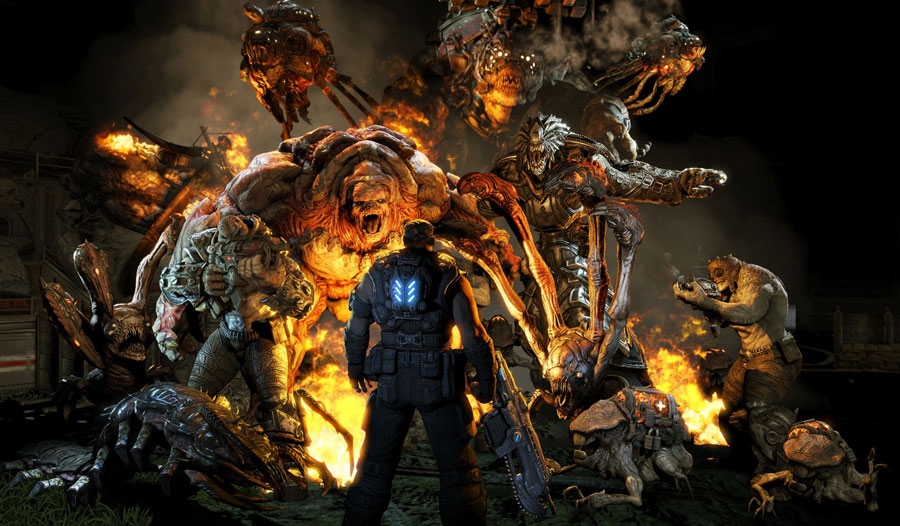 Touted as the final in the trilogy, Gears of War 3 has had the luxury of nearly three years in development.  Anyone who’s played the previous two games will find a good deal of familiar ground here, but that is by no means a bad thing.

Character dialogue in Gears of War 3 still teeters on the ‘so bad it’s bad’ fringes and, while there’s clearly an attempt at writing a convincing script for the game, the ludicrously over-gruff tones make it hard to even pretend to take it seriously.

The game looks fantastic, as always, and while gameplay hasn’t changed significantly, these considerations quickly become secondary to getting stuck into the game and having a good time.  Gears of War made a name with brutal, frantic, over-the-top combat and this third installment thankfully does nothing to change the deal.  Particularly notable are the weapons-specific executions, the most barbaric and entertaining of which is ripping off your enemy’s arm when he’s down then beating him to death with it.  Classy.

An improvement in the cover system, making your character’s movements both more realistic and effective as he dodges from one hiding spot to another, is very welcome, but it’s the great pacing and heaps of drama-laden ‘set piece’ action sequences that help the game steam recklessly along.

Perhaps more than in the previous two ‘Gears’ games, there’s a degree of character development that will allow some players to feel a connection or empathy with the COG team members – including a funny quip from Clayton Carmine, whose brothers Anthony and Benjamin appeared in the previous games – and certainly there are touches in the way the less action-packed sequences play out that attempt to tie what’s gone before, which is fitting with GOW3 apparently being the third and final installment in the franchise, or, rather this particular GOW ‘story arc’.

The graphics are a little more ambitious this time around, too.  Sure, you see a lot of greens and browns but GOW3 is also noticeably more colourful in a lot of areas and the ‘washed out’ palette is no longer the principal identifying element of the game at 20 paces.

Gears of War has gained most attention for the fun, and long-lasting appeal of its online play modes, and GOW3 doesn’t disappoint the fans.  A new addition is the ability to play with up to four players online in co-op campaign mode and you can still play split-screen at home too, if you prefer. Both Horde mode and ‘Beast’  (basically, the opposite side of playing Horde mode) are great fun, the latter being a new addition to the game and one that allows players to get in the skin of the bad guys.

It’s not just novelty value here, either, because as much fun as it is to just possess one of the ugly, spider-cum-hand-like ‘Corpsers’, for instance, there’s also some challenge to be had in figuring out each of the bad guy’s different attacks to boost your strategic play in multiplayer.

Gears of War 3 is a brilliant game, and does full justice to the impact made by its predecessors on the ‘third-person shooter’ genre, raising the bar yet keeping all the familiar, fun stuff along the way. We still can’t work out why no-one speaks any more over Xbox Live when in the game – perhaps they’re all locked into their own, cosy ‘Party’ chats – but when the action is this good, who really cares?!