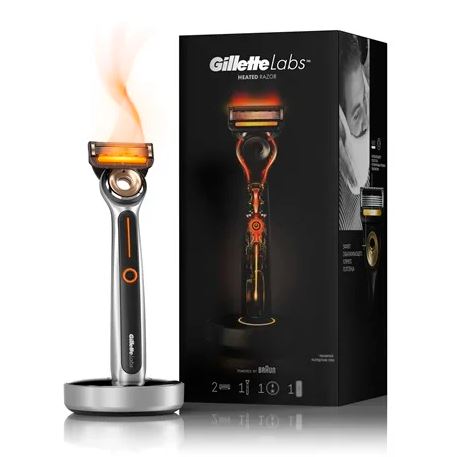 The A$299 GilletteLabs Heated razor is perhaps its most ambitious product yet from a company that usually sells disposable and cartridge blade razors from a few cents to a tad under $30.

Gillette claims it is the world’s first Heated Razor!

Well, the GilletteLabs Heated Razor is the first to market, but the honour belongs to Lou and Pete Tomassetti. They conceived the SmartRazor in 2004 and, after a long gestation, eventually became an Indiegogo project in 2017. It had a rechargeable AA battery, an estimated cost of about US$75, and blades $7 each. Its claim was that a heated blade makes shaving three times easier – reducing razor burn. It is yet to be delivered!

Never mind which was first – it seems the prospect of a heated shave has merit. Gillette claims the GilletteLabs Heated Razor delivers the warmth and sensation of a hot towel shave at the push of a button. We set out to test all claims on its website, and overall, we can report that it does give a great shave.

On with the shave

Now let me tell you a little story. When the COVID-19 lockdown started on 16 March, I jokingly vowed not to shave until the restrictions were lifted. God (well, any deity) must not have been listening because barely two weeks later, Gillette asked me to review the GilletteLabs Heated Razor for GadgetGuy.

Well, it is here now, and my nearly five-week-old hirsute, salt-and-pepper beard – that my wife quite likes now after the prickle factor reduced – is no more. Shorn smooth I am – like a baby’s butt!

Anyway, my aged mum is happy – she says never trust a man with a beard.

What is a GilletteLabs heated razor?

It started life as an Indiegogo project, not because Gillette needed the funding but because it wanted to crowd-develop it. It started shipping last year.

What is a man shave – seriously?

Shaving is the process of removing daily or weekly stubble from your face, neck, and other parts of the body. Facial hair grows about 10mm a month, and all razors struggle with stubble over a few millimetres. Note:  I first had to use a Remington Rapid Cut Turbo set to 3mm to slash the undergrowth to stubble length.

A man’s face becomes accustomed to the razor they use. For example, if it is an electric ‘dry-shave’, you can have rotary heads, straight heads, multiple ‘blades’ and more. If you swap from a rotary to a straight, it takes several weeks to retrain your face and learn how to get the best shave.

If you use a blade, you can go for a single/twin disposable to a fancy 3-to-5 blade cartridge razor. And you must use a lubricant for a ‘wet shave’ – the aim is to reduce skin drag and razor burn. A five-blade razor shaves quite differently from a disposable.

Now, I usually use both technologies for a perfect shave. A disposable razor (Gillette Blue II with a Lubrastrip) in the shower and some shower gel on the stubble to reduce friction. I call this more of a lawn trimmer rather than a precision mower!

I usually finish with an electric Panasonic ES-LV9Q (and I don’t mind Braun either) because it also gets hard to cut hairs around the mouth, under the nose and in a few aged craters on my chin. It has a straight electric trimmer to catch errant wispy hair and give me a good line on the sideburns.

My point is that it may take a few weeks (see update at the end) to see how good the GilletteLabs Heated Razor is, and we will update this review if we find a difference over time.

This may also be good for those that need to shave legs or other body parts.

For now, we will rate it as a replaceable cartridge razor with ‘benefits’.

Let’s explore the claim of a hot towel shave

I have never had one. I see it in the old westerns where boiling hot towels are slapped on a villain’s face with nary a wince – the mark of a tough guy. A steaming hot towel – presumably close to boiling point – opens pores, softens hair, and allows cut-throat straight and blade razors to glide more smoothly over the skin.

In reality, hot means as safe a heat as you can handle! Most hot water systems are at least 60°, and water boils (steam) at 100°, so it is somewhere in that range.

Barbers say that it takes about three minutes of steaming hot towel/face contact to make a real difference to a shave.

How can a Gillette Heated razor recreate that?

Push the button, and in a fraction of a second, a stainless-steel heating bar (below the five blades) heats to 43° or 50°. It has four temperature sensors to keep it at the temperature and avoid overheating. I like the high heat setting.

And start shaving. Yes, you can feel the heat, but it is localised under the head – there is no residual heat trail as you move the razor. At first, I used it as I would a disposable, but that was too fast. A long, slow stroke gives better results.

Let’s be clear – it is a DIY version of what barbers charge good money for! And DIY means it is only as good as the person using it – a lousy tradie blames their tools.

So, in my sexagenarian case (yes, lots of shaving experience), the answer is no – it is not what I envisage a hot towel shave to be.

It provides a warm feeling precisely under the razor head – it is never too hot – and that is it.

The five blades glide effortlessly over the face, but again I repeat – slow down and feel some heat.

The result of wet shave #1 (in the shower after beard removal) was that most of the face, neck and chin was smooth to touch.

Looking in a magnifying shaving mirror, I could see the under-nose and crater chin areas needed attention. I used it to dry shave, and the heat did reduce drag, clearing up a few areas that needed attention.

For the days following (shaves #2-5), I used it nightly in the shower to remove the day’s stubble (I need to shave daily – shame my pate can’t grow hair that fast – if at all).

I have not used it long enough to know things like blade replacement time. Based on other reviews, blade life should be 8-10 shaves, and others say 30 days!

The waterproof razor has a rechargeable lithium-ion battery and a wireless magnetic charging base.

A full charge provides about 18 minutes of heat. The charging indicator blinks when the charge is low – about three minutes use left.

Now here is the good part. You will probably place the razor back on the charging base after use, so it should always be topped up. But if you are like most and only have limited bench space and one power point in the bathroom, then it may be an issue.

Well, I have learned a lot, so here is a summary.

OK, this review is only after five initial shaves (and updated at the end of week three above). I went from a bushy beard to a smooth, clean-shaven visage.

For now, I would call it ‘nice’ to have – not a necessity. It certainly is the smoothest blade shave I have ever had, and the hot bar is nice on the skin if you shave slowly. In my opinion, it needs the reinforcement of a hot shower and a good shave cream to get the best results.

People will look at $299 plus $10 per replacement blade and find that hard to swallow. By the way, don’t fall for Amazon.AU pricing – it has it at A$425.55 plus $14.75 delivery. I find more and more that Scamazon has the worst prices. Shop locally at the Shaver Shop and give an Aussie a job.

Perhaps my main gripe is that its not a travel razor – no travel pack and an awkward pack at that,

So, it is not a gimmick, but it is an indulgent purchase for those that can afford it.

GilletteLabs Heated razor
A GilletteLabs heated razor does have some benefits providing a smooth hot shave. But can you justify the price?
Features
9
Value for money
7
Performance
8.5
Ease of Use
9
Design
9.6
Positives
Probably the best cartridge blade shave you can get – with or without heat
The heat seems to reduce skin drag but use it in the shower for best results
Love the thicker handle
Negatives
Slow down and feel the heat
Six shaves between charges means you need to take the charger and charge base when travelling
No travel case – all three items are an awkward pack
Expensive to buy and ongoing blade cost – circa $10
8.6