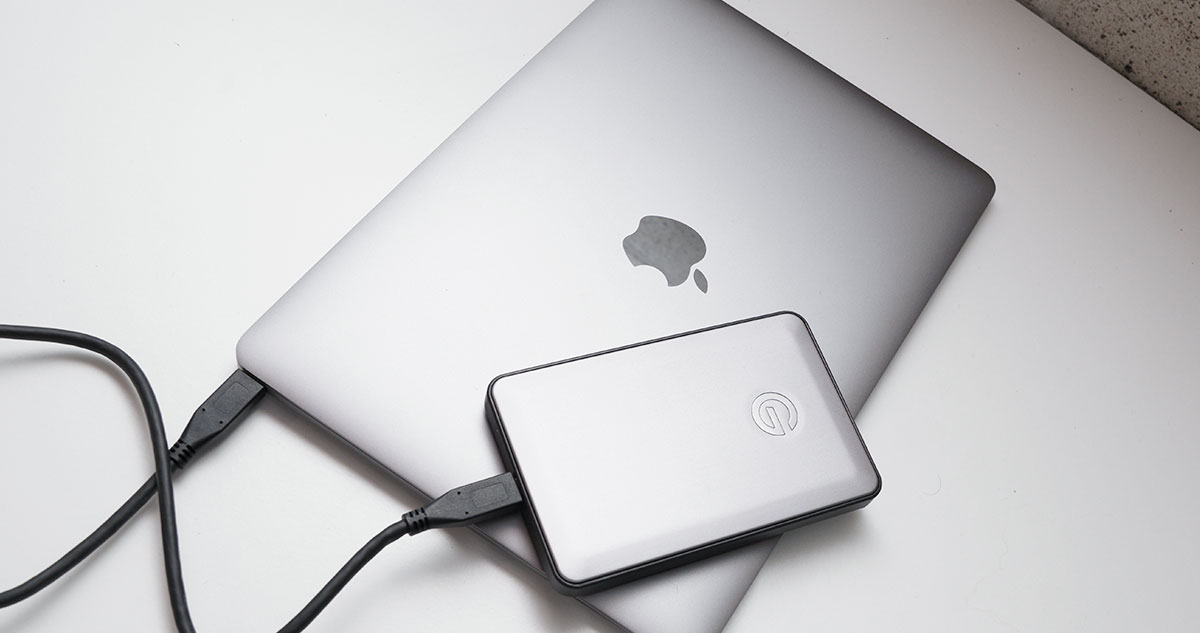 External drives are about to go through a bit of a change, as the ports shift to a newer standard. G-Technology is one of the first to do this, and we’re going hands-on with the result.

The next generation of devices will be easier to plug things in and out of, as the world has finally decided on a format.

For those who haven’t seen it before, it’s called “USB Type C” and as the name suggests it’s the next generation of USB.

Just like your standard USB cables and drives, you can expect to plug this into all sorts of devices, with phones, tablets, laptops, and monitors the first crop of products to support the technology.

The port is unique for several reasons, but one is that it is completely reversible so is pretty much impossible to plug it in the wrong way, while another is that it can carry more charge making it ideal to be used as a power port for computers.

But more than anything else, it is unique because finally it’s a standard everyone agrees on. Apple, Intel, Samsung, Sony, Microsoft, Asus, LG, HTC, and so on and so on, as companies come to the table to make USB Type C something that can exist everywhere, meaning compatibility for one specific plug will eventually come to more than just a smattering of phones and laptops.

Hard drives will get the technology, too, with that one same plug you use to charge the computer also used for moving data to and from the drive, and G-Technology’s G-Drive Mobile is one of the first that has received the port, arriving in Australia this month.

Opening the box, we’re glad to see that G-Technology has at least included both types of cable with this drive, because that means you don’t technically need a new computer to make use of the drive.

While some hard drives will require a USB Type C port to power the drive, G-Tech’s portable box that is the G-Drive is not one of these, meaning it can work off the standard five volts we normally get from a standard USB port.

That might come off a little too technical, but what it means if you can plug this drive into your regular old laptop or desktop, and it will still work, giving you access to 1TB of storage in a slim-line size.

If you decide to upgrade to something a little more recent, there’s a good chance you’ll see it arrive with a USB Type C port, so the drive will work with this, too. Hooray!

Getting to the drive, it’s clear the Mac audience is the key demographic with this one, offered in a silver or a rose gold. Those choices seem particularly skewed to the MacBook crowd, and given this is a USB Type C device and the only port on the MacBook is a USB Type C port, we’re pretty safe in making that call.

The drive was even formatted for Mac OS out of the box, though PC owners with USB Type C won’t have to worry, because it can be formatted to ExFAT pretty safely, too.

Checking in with G-Tech on the matter, it told GadgetGuy that “all G-Technology products are formatted for use with a Mac (HFS+) out of the box”, making them ideal for Mac owners, and a little more annoying for PC owners.

For instance, Mac users will see the drive work pretty much immediately, even with a shiny new icon (below), while Windows users will be asked to format the drive instead.

Given PCs support USB Type C at the moment — with more PCs supporting the technology at the time this was published — it’s surprising to see pre-formatting for Macs here out of the box, but it’s not as if it’s hard to format for a PC if you plug one in, and most Windows installations will just offer the option the moment you do.

We get it, but just something worth pointing out and acknowledging here.

Back to the drive, though, because it’s an easy setup if you have that Mac, as you merely plug it in and make it work.

Regardless of what formatting your G-Drive Mobile is set to, the performance is about the same: roughly 135-140MB per second read and roughly 115-120MB per second write.

As a point, those aren’t amazing speeds and certainly won’t blow your eyelids off or set them on fire, but should do for the majority of people out there. Really, it’s just the same old drives we’re seeing from other manufacturers, but in a case that comes with both a standard USB cable and the newer USB Type C cable.

Perhaps the most important aspect of the G-Drive Mobile comes from the future proofing the USB Type C port offers, because if you do manage to upgrade, you’ll likely have a drive that can connect to your computer through the same plug as to how you charge it, and possibly even talk to your phone.

For now, it’s just a nice feature you could get access to later on, while the option for a semi-future proofed drive is handy, too.

G-Technology’s G-Drive Mobile for USB Type C is available now for $189.95 at Apple stores across the country.