Huawei Mate X – the dazzling new flagship phone with everything 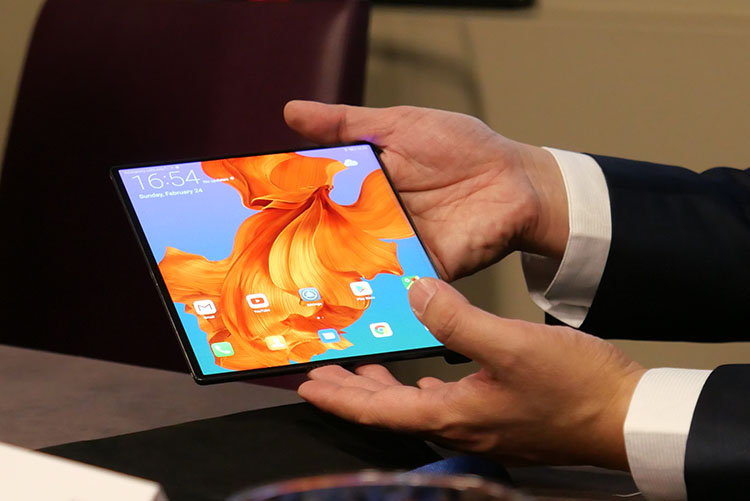 Well, we kind of expected big things from Huawei this year with its new phones, but only superlatives can be used for everything to do with the Huawei Mate X smart phone. In the lead up to the Mobile World Conference in Barcelona, Huawei showed off a phone that, at this stage, looks to be state-of-the-art in everything. (And those superlatives apply equally, as we’ll see, to the purchase price).

The High Points of the Huawei Mate X phone

Let’s organise our thinking first with a summary:

Let’s look at these points a little more closely.

The display uses flexible OLED technology. When open, it has an 8 inch diagonal with an aspect ratio of 8:7.1. The resolution of this giant screen is 2,480 pixels across by 2,200 vertically.  Closed, the screen wraps around both front and back, along with one edge. The main face in this arrangement features a 6.6 inch display, while the other side has a 6.38 inch display.

When it’s closed, the phone detects which way around it is and only uses the top side to display things. In one cool demo,  the Huawei Mate X was running the YouTube app with a video across the top of the open screen, looking very classy. The Huawei executive folded the screen back and as it approached being fully folded, the screen went blank for an instant, then resumed in normal portrait orientation phone mode.

I will note that for me at least, it was slightly disconcerting to see operating video running on a screen as it was being folded.

Well, not quite folded. This display technology is flexible, not foldable. The phone is foldable, but the screen is on the outside, so the minimum bend radius to which it is subject is more than 5mm. The phone measures 11mm thick when folded. That’s quite the advance on the 17mm of another recent folding phone release.

Huawei did a lot of work to get the phone to fold in a particular way. It did not want a gap between the two halves when it was closed. It wanted them to be against each other, without even a paper’s width between them, the touching surfaces perfectly parallel. At the bend, the screen needed to be supported so that the flex was even across the bending section. And if you bend a book, you’ll notice that the edges of the pages form a kind of wedge as they slide across each other, the radius of each of the stacked leaves being different to those of the others. All that made hinge design rather more complicated that one would think.

In the end, it developed a new, very complex hinging system that uses more than one hundred parts to manage all those requirements. It calls this a Falcon Wing Mechanical Hinge.

The ability to have the two halves mate neatly against each other without a gap is what allows the relatively thin 11mm to be achieved. And it’s that which allows the Huawei Mate X to slip neatly into a pocket, rather than create an unsightly lump.

I paid close attention to the whether there was any bubbling or other damage due to flexing of the screen. With the two prototype units I could inspect reasonably closely (but not touch!), I could see the section around the fold seemed to be raised slightly compared to the rest. But I could only see that with the screen switched off, and even then only at an angle. Looking face on, as the user would, the surface looked perfect.

I feel certain that when the production phone is released, Huawei will tell us how it has employed machines to open and close test phones tens, perhaps hundreds, of thousands of times, proving longevity.

The phone comes with 8GB of working memory and 512GB of storage. It runs the Kirin 980 processor. And that is accompanied by Huawei’s Balong 5000 5G chip. You can read our thoughts on the Balong 5000 here. Huawei naturally reckons it’s the best 5G solution on the market. It says that with the four antennae built into the Huawei Mate X, it supports downloads of up to 4.6Gbps using the sub-6GHz bands. That, it says, is twice the throughput available from phones using the Snapdragon X50 and Exynos 5100 5G solutions. It says upload speeds using the sub-6GHz bands are up to 2.5Gbps.  For the millimetres bands, it puts the respective speeds at 6.5 and 3.5Gbps.

Huawei also said that the competition’s 5G modems are NSA-only, whereas the Balong 5000 also supports SA. The first stands for “Non-Standalone” operation, and that denotes “5G networks … supported by existing 4G infrastructure”. SA – “Standalone” – is where 5G is headed. That will mean that all the infrastructure is 5G-ready, and this will realise the full potential of 5G, including Ultra-Reliable Low Latency Communications.

The Huawei Mate X is not the only 5G phone the company plans to release this year. It is also planning a 5G version of the Huawei Mate 20 X, a more conventional phone, but with a massive 7.2 inch screen. The current non-5G version isn’t available in Australia.

The Huawei Mate X packs a 4,500mAh battery, which ought to provide a respectable battery life. Huawei has been further developing its fast charge technology. This phone will come with a charger capable of delivering 55 watts. The phone can be charged to 85% capacity in half an hour.

When folded, one edge of the phone on the side with the smaller screen is not covered by display area. This has a stack of three Leica-branded cameras. One of these doubles as a selfie camera. Huawei was reluctant to release any details on the camera setup yet. I think that it hasn’t finalised those details for the production phones.

The fingerprint scanner is on the power button on the side.

Indicative pricing – for Europe only at this stage – is 2,299 Euro. Say, $3,700 Australian dollars (plus some, most likely). Hey, you didn’t think that something packing as much new stuff as the Huawei Mate X would come cheap, did you? Now you may scoff and say no-one’s going to pay that kind of money for a mobile phone. And you may be right. But the thing is, most phones look the same. It isn’t easy at a glance to distinguish between a $1,500 premium model and $500 budget phone. But this phone? It stands out like a Rolex watch. It will be instantly recognisable to those in the know, and intriguing to many others.

If you spend your near-$4,000, at least it will be obvious that you’ve done so. So in addition to its technical and practical merits, that can itself make this phone an attractive proposition.

Huawei is aiming for a mid-year – that’s mid-2019 – release. There’s still plenty of development left to do. The demonstration model I got closest to – we weren’t really supposed to touch, and certainly couldn’t pick them up – didn’t yet have side-by-side functionality. But that is planned. Apparently things like final camera specifications hadn’t been finalised yet, either. So here’s hoping we will see the Huawei Mate X in Australia this year.

And the future? I asked Bruce Lee, the Vice President, Handset Business, Huawei Consumer Business Group, what he’d be looking to improve in the Huawei Mate X for next year’s model. He didn’t declare perfection for this first model. Instead, he said he’d be working on making it even thinner, lighter, more durable and more resilient when it comes to falls.

The author attended the launch of the Huawei Mate X in Barcelona, Spain, with the assistance of Huawei.