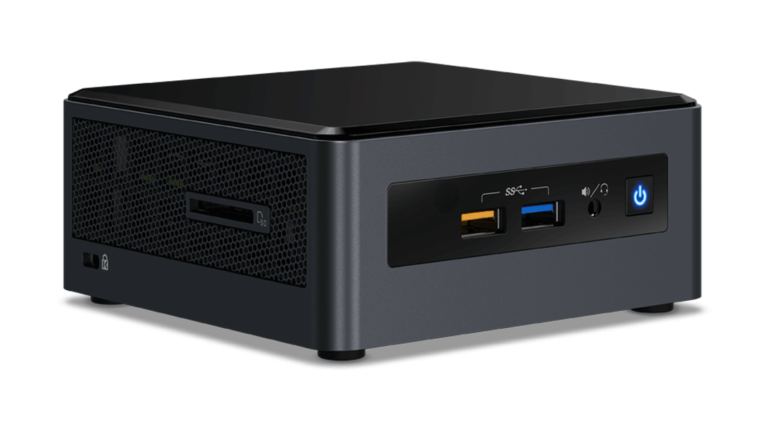 The Intel NUC – next unit of computing – has been around for six years. Perhaps it was an idea ahead of its time.

NUC is more about a compact concept of a full-blown x86 PC. It comes in several packages.

NUC’s have just been updated to 8th Generation Core i3, i5 and i7 processors but given that you may have a specific use for a NUC don’t ignore the 7th generation or even the Celeron processor versions either.

Typically, it is a small form factor, 100mm square containing everything you need. They end up in interesting places.

For example, as they are VESA mountable many enterprises put them on the back of a monitor screen (most recent models support up to dual 4K monitors). It saves desk space and considerable energy.

I have seen them controlling shopping centre and shop signage where inbuilt Wi-Fi and Bluetooth make for easy updates.

Frequently uses are for MPC (Media PC) where you only need a PC to access media stored on NAS devices. Some models have 4K decoding and HDMI 2.0a/b out and some even have discrete Radeon GPUs.

Perhaps the most interesting is on a fleet of giant mining trucks doing everything from engine monitoring to load statistics. These run off 12V/DC and require under 15W allowing for DC operation.

Because there are so many models I will focus on the 8th generation fully equipped with memory, NVMe SSD and Windows 10 but there is little difference to the 7th Generation models so don’t overlook a bargain there.

Most of us use a desktop or laptop PC. Intel NUC is all about similar power with surprisingly few compromises in a very much smaller space.

No, they are not powerhouse PCs for serious gamers and photo editors. They are every day PCs for specific uses. For example, you may only need a small m.2 SSD because the NUC will access network attached storage. You may only need an i3 processor as all it will do is decode FHD or 4K video.

ASUS has its take called VivoMini (GadgetGuy review here), Lenovo has a ThinkCentre Tiny Desktop, HP has a ProDesk Mini, Pavilion and an Elite Slice and there are many lesser known brands.

The point is that you can customise a barebones unit or buy a full kit that works out of the box.

My only issue is that I really would like Thunderbolt 3 for the best expansion options. Intel would argue that it already has loads of expansion and its Games unit has that.