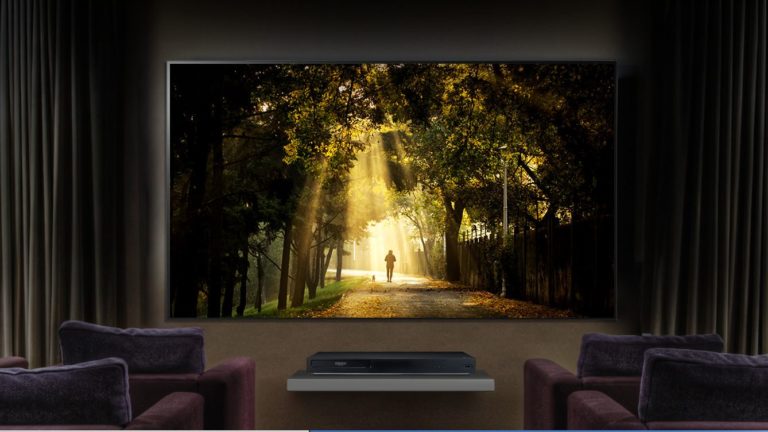 The LG UBK90 4K Blu-ray has full support for Dolby Vision and Dolby Atmos. If you want to get the most from your 4K TV, this is the one to buy.

LG has two new models. The $399 UBK90 is premium offering Dolby Vision (a superset of HDR10), Native 4K UHD Netflix streaming, Wi-Fi AC/Lan and Dolby Atmos. It is the stuff of audio/videophile dreams.

No HDMI cable but that is now so common.

The best description is a big black slab. I don’t think any current Blu-ray player makes a fashion statement. It may be nice to see it in Sonos White!

Not that this is a bad thing – it fits in well and is strong enough to stack the Foxtel IQ3 on top.

It has HDMI Out ARC (called Simplink if you use an LG TV) and HDMI Out (to a soundbar). Both support HDCP 2.2. That makes it a little more flexible.

Most will connect it to a soundbar if that supports 4K pass through. I used an LG-SJ9 (last year’s Dolby Atmos model), and it was perfect.

It also has Digital Audio Optical (to a sound bar), Ethernet LAN port, Dual-Band Wi-Fi AC and USB (5V/.5A) that supports flash drives and external hard disks for playback. Take care with the USB – at .5A it may not support external hard disks. I tested it with an SSD.

A nice feature is support for DLNA devices on the LAN/WAN. It found my WD My Cloud DLNA server.

The addition of Wi-Fi AC dual band is a tremendous boon for those with no Ethernet cabling or a router in another room. In tests, it streamed a 4K Netflix Dolby Vision/Atmos title flawlessly.

More Blu-ray disks now support Dolby Vision and Dolby Atmos. And if you have a TV/soundbar that supports it, then you have the best viewing experience of all.

Let me tell you what a delight it is to unlock that experience. I had used Jumanji Welcome to the Jungle as a test Blu-ray during our recent 4K TV tests. I missed so much!

At present Sony and of course LG have Dolby Vision and Dolby Atmos TVs and sound bars.

We also reviewed the Sony A8F OLED – another impressive OLED TV. This was tested with a Sony 4K Blu-ray.

Let’s just say that Dolby Vision and Dolby Atmos have spoiled all other TV reviews for me.

Upscaling means that it can take older 1080p DVD/Blu-ray content and add in extra pixels to make it look better. Most 4K TVs can also do that.

CD sound formats include – MPEG-1/MPEG-2/MP3/WMA/AAC/FLAC. It does not support SACD’s or DVD-audio discs.

From initial tests, it won’t play video from the USB (this could be a DRM issue – we are investigating further).

Basic. On the front of the unit, there are buttons for eject, play/pause, stop and power off/on.

The remote is not backlit – it would be nice if it were.

Menus are easy to navigate. It responds to remote commands quickly. Setup is easy. Wi-Fi connection and firmware update are simple.

Everything you need to adjust the picture the way you like it there. Scene modes/picture presets ( as in vivid, movie etc.,) contrast, colour, aspect ratio etc.

The full manual is here.

GadgetGuy’s take. The LG UBK90 4K Blu-ray is the one I have been waiting for!

Yes, there are competitors, but this one fits the bill for a good price/feature point. More to the point it supports all the high-end video standards.

If you have a suitable OLED TV, the results are more than impressive. Even if you only have a standard 4K, UHD HDR LED the UBK90 provides a superior picture to a 4K Blu-ray player.

It is one of the very few that supports Dolby Atmos and Dolby Vision. I am yet to review similar products from Samsung, Sony or Panasonic.