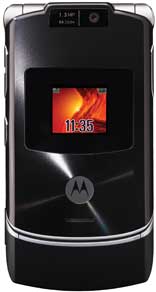 A member of the phenomenally successful RAZR line of phones, the V3xx shares the family’s sleek flip-open design, even more so than its immediate predecessor, the V3x. It comes in several colours, and flips open to reveal a backlit etched silver keypad.

Unlike the V3x, the V3xx supports the newer HSDPA 3G services. It can also handle Bluetooth 2.0. It has a proprietary inbuilt media player than can handle both music (in MP3 and AAC format) as well as video in MPEG-4 format (it doesn’t support WMA or WMV).

In terms of messaging, it supports all the usual suspects: regular and video calling, SMS, MMS and email (but not push email). It can connect to other devices using Bluetooth or USB, and it has a microSD memory expansion slot (though it does not come with a microSD card).

Although the RAZR line has been successful for Motorola, one starts to wonder whether it has any other ideas up its sleeve. Although the original design was a good one that really invigorated the market for ‘fashion phones’, it’s starting to feel a little dated. Yes, the phone supports HSDPA, but some of the other capabilities of the phone were state-of-the-art about two years ago.

The internal camera is perhaps the worst. No matter how hard we tried, we could get nothing but blurry images a crummy video from the device, and the shutter lag on the camera was extremely annoying.

That said, we were very impressed with the quality of the audio from the phone. It produced tones that were loud and clear through the supplied headphones or even without headphones. Voice quality during calls was also excellent, and the flip open design feels comfortable to use when making phone calls.

This makes the V3xx an excellent media player, in spite of the fact that it doesn’t come with a memory card built in (and adding one requires you turn off the phone and remove the battery to access the microSD slot). It does support sorting music by artist, album or genre, and also keeps a list of the most recently played tracks. Its music player is not elaborate, but it works very well. We were most impressed.

We were also impressed by how easy the phone was to navigate and control. The screen was very clear and had excellent backlighting. The buttons, though flush with the phone, are responsive and plenty large enough for even the most clumsy of fingers. After suffering with phones like the Sony Ericsson W880i, the V3xx seemed like a godsend. Motorola’s texting system is not the most pleasant to use, but that’s a fairly minor point.

It’s not exactly a revolution in design, but the V3xx is a phone that’s comfortable and unchallenging to use. The camera is awful, and some of the software and features are clunky and outdated, but overall the phone should serve those well who just want a phone that works without too many bells and whistles.

The V3xx also supports HSDPA, which makes it a great choice if you want broadband while on the road. You can hook it up to your PC and get fast Internet access from anywhere in the 3G coverage areas.