NBN is getting better, but FTTN still sucks for some 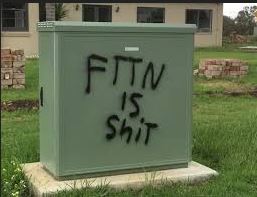 The latest ACCC report ‘Measuring Broadband Australia’ confirms that NBN is getting better, but FTTN still sucks for some.

The good news is that most NBN RSPs (retail service providers) can deliver an average download performance of 86.6% of the maximum plan speed you purchase during all hours, decreasing to 85.3% during the busy hours (between 7 pm and 11 pm).

Put simply, the days of some RSPs offering lower prices and making super-profits by oversubscribing on limited bandwidth (huge contention ratios) seem to have subsided. Or they get fined!

NBN is getting better, but FTTN still sucks for some

Again in layman’s terms if you buy 40Mbps you will get about 35, 20Mbps about 16, 5Mbps about 5 and 1Mbps about <1. The faster 40Mbps tier is most subject to speed variations.

Some 4.7% of tests achieved <50% of advertised speeds, and overall, 11% of the Whiteboxes were underperforming.

The most reliable connection was FTTP, FTTC, and HFC (averaging 90%) but 95% of the issues were on FTTN. Latency (ping) was also longer on FTTN.

These were measured but are not statistically accurate because some gateways fall over to 4G and don’t show up as a prolonged outage.

The TIO report shows that complaints involving NBN are 30% of its total but sowing a steady decline over the year.

But the report still shows that the whole communications field is a minefield and there are good and bad actors. By far the largest complaints were about Tel$tra and Craptus with Vodafail and TPG/iiNet not far behind.

GadgetGuy’s take – Thanks to the big hammer the ACCC wields NBN is becoming the reliable utility that it should be.

Yes, KRudd’s vision of Fibre to the Premises for all was best but it may have bankrupted the country. Meddling Malcolm Turnmbul mandated an MTM – multi-technology mix (Malcoms Terrible Mess) but at least most have NBN in some form.

I have HFC and it is rock-solid and reliable. I also have FTTN and spend nearly two years arguing with Tel$tra (a great read if you have the time or suffer as I did) but that is now over. It is not over because Tel$tra did the right thing; it is over because I fought tooth and nail (and had the data t back it up) to get what I paid for – a 100Mbps reliable service. In the end, beyond doubt, NBN was providing the service it should have and Tel$tra’s systems were at fault.

So if you have a problem complain to the TIO and let me know – it may make a great article.

Thanks to the ACCC (yet again and no I am not the president of the Rod Simms fan club) we are getting to the stage where rip-offs and slow speeds are a thing of the past.