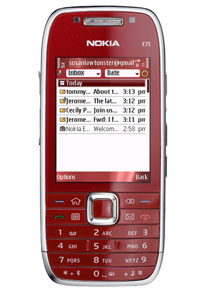 Nokia’s new E75 mobile phone is a slider-style phone. When used in portrait mode, it has a numeric keypad, and when held in landscape, or widescreen aspect mode, a slide-out QWERTY-style keyboard available. When I mention ‘ aspect’, don’t think that this is a touchscreen phone. It isn’t – the 5800 XpressMusic is Nokia’s entrant in the touchscreen stakes. This widescreen mode allows a somewhat decent size to the letters on the QWERTY keyboard, plus let’s face it, looking at email or website is far more satisfying in widescreen on a mobile device.

And speaking of email, this is the key point of this phone. Oh yes, it’s a perfectly nice phone, but this is the first phone from Nokia that ships with its new Nokia Messaging service. Similar to what Blackberrys have enjoyed for a number of years, this is essentially a ‘backend’ system that can run up to 10 email accounts on the E75, gathers them into a central mail server run by Nokia, which then compresses and ‘pushes’ mail through to your handset.

But even though the E75 will be a strong contender for bizheads to flock to the phone, it is not all about business. First up, Nokia is repeating the trick tried on the earlier E63, of allowing the user to toggle the screen between business and personal profiles. As mentioned earlier, there’s the QWERTY keyboard for the serious texter, with decent-sized buttons for larger-fingered typists.

The camera is 3.2 megapixel, with autofocus and flash, plus there is what’s called a mirror camera, which is a secondary camera allowing you to make video calls. The camera also captures video recordings in VGA quality. What else? Music player, FM radio, and Nokia Maps right out of the box. It also thankfully has a 3.5 mm headphone jack, so there’s no problem plugging in your own headphones for a little solo music time. There’s 50MB of internal memory, the E75 ships with a 4GB card, and you can also plug in up to an additional 16GB via a microSD card.

The interface is Nokia’s Symbian operating system, so anyone who’s had a Nokia phone will know their way around the interface. As is usually the case with Nokia, I thought it had a good build quality, and it really does fit into the nice middle ground sizewise; the phone is neither too slight nor too bulky, happily fitting into your pocket or small handbag.

The E75 will be in stores this weekend, and all the major telcos will have it for you to look at or buy. If you are a heavy mobile email and web user, be sure to look closely at the various data packages on offer.