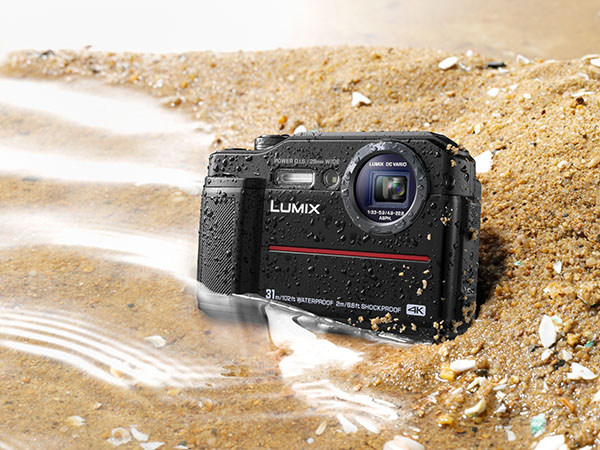 So what do we have here? A $599 camera. And, yes, that’s quite inexpensive for a camera that can literally shoot under water.

I know, all sorts of stuff is allegedly waterproof. You know, like many phones. But often that’s really just in case it slips from your fingers. Snatch it back out of the water within a few minutes and, so long as it hasn’t sunk too deeply, all should be fine.

However, the Panasonic Lumix FT7 isn’t like that. It is designed to operate underwater. Quite a lot of water, for quite a while. The camera has a formal IP68 ingress protection rating. That means totally dustproof, and safe for immersion in more than a metre of water for more than half an hour. But that understates it.

Panasonic rates this camera as good for operating – not just being immersed in – fresh or sea water:

In a mood to take some 4K video on the Great Barrier Reef? This camera will do it for you.

How deep is 30 metres? Very, very deep. As a rule of thumb you shouldn’t dive deeper than ten metres. Go deeper, and you’ll need to consult dive tables so that you know how long you can stay then and how to decompress safely. I understand that the bends aren’t pleasant.

The Panasonic Lumix FT7 is tough as well. It conforms to the US Defence Department MIL-STD 810F Method 516.5-Shock standards. That involves dropping things from 122cm high (Panasonic actually used 200cm) onto their corners, ridges and faces a bunch of times. It will also cope with temperatures down to -10 degrees Celsius.

And you can probably stand on it too. The Lumix FT7 can cope with loads of up to 100kgf. (Kgf? That’s just a fancy way of saying a weight of 100 kilograms.)

(But Panasonic warns that if it is dropped or hit, it should be inspected by Panasonic to make sure the waterproofing has not been compromised.)

So, once you’ve got it underwater, or out on a mountain hike, what can you do with it? Clearly a lot of Panasonic’s higher-end features have trickled down into this modestly priced unit.

It has a 20.4-megapixel sensor and 4.6 times optical zoom. That gives it a 35mm equivalent range from 28mm wide angle to 128mm telephoto. It has the usual rear monitor but adds a “Live View” finder. I guess you won’t use the latter under water. Dive goggles tend to get in the way. The rear monitor has tempered glass for robustness.

Panasonic says that that the camera can capture video in 4K at 25p. Recent Panasonic cameras have allowed you to switch between that and 24p and 30p. I hope that’s the case with this one.

It will also shoot video in 720p mode at up to 100fps for slow motion, and it supports time-lapse and stop motion animation.

Panasonic has included its 4K Photo mode. This, in essence, takes brief snippets of 4K video from which you can later select the particular frames that you want. The 4K Pre-burst mode captures 60 frames, centred on when you press the shutter release. If you jumped the gun, or were a bit slow, chances are you’ll still have the right shot in there. The trade-off is 8.3-megapixel resolution instead of 20.4.

There’s also a Post Focus feature. That’s basically focus bracketing so that you can choose the point of focus later.

In keeping with its outdoors orientation, the camera has an altimeter, compass and LED torch built in. You can use Panasonic’s Image App on your smartphone to connect to the camera via Wi-Fi. You can use that for transferring photos to your phone, but also to remotely control the camera.

The battery charges in place in the camera, fed via a USB socket. Which means you have almost endless charging options.

Sadly, you’re going to have to wait until July for this one to hit the stores. Again, that price is $599.

BTW, Panasonic is celebrating its 100th anniversary this year.