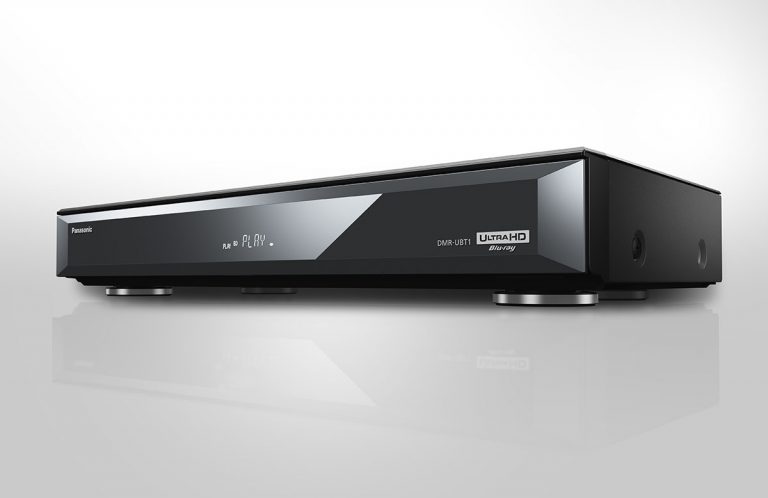 For over a decade Panasonic has pretty much led the way when it comes to combo personal video recorders and disc player/recorders. I’m using the general word “disc”, since this goes back to DVDs. It was the first with Blu-ray/PVR, with a Blu-ray recording/PVR combo, and now with an UltraHD/PVR combo.

The Panasonic DMR-UBT1 combines the ability to play DVD, Blu-ray and UltraHD Blu-ray discs, with the ability to tune in or record two different TV stations, or time shift one using the built in two terabyte hard disk drive, and with the further ability to record to (non-UHD) Blu-ray or DVD. It’s also a high quality digital media streamer, with support for Netflix.

It implements the latest version of Freeview Plus, which provides an advanced Electronic Program Guide with “catch up” TV integrated into it, using the HbbTV (Hybrid Broadcast Broadband TV) platform.

You can pause live TV. If, somehow, the two terabytes is insufficient for your recording needs, you can plug in a USB hard drive for even more. But Panasonic says that the two terabytes is sufficient for 1370 hours of recording. I figure that would be in one of the high compression modes. On the basis of data I’ve gathered, there should be sufficient capacity for 500 to 800 hours of HD TV broadcasts, and 900 to 2000 hours of SD TV broadcasts (they are all over the place in their digital demands).

The disc player supports all the good stuff you expect from UltraHD Blu-ray, including High Dynamic Range, Wide Colour Gamut and of course UHD resolution. It doesn’t seem to be on Panasonic’s plan to include Dolby Vision, an optional enhancement of HDR.

The network streaming capabilities extend to DLNA (Digital Living Network Alliance) functionality for video, music and photos. Your network media can be played back using the unit. If you’re an Android phone, you can also generally stream material from it to the unit as well. Or mirror it via Miracast.

It also supports high end audiophile formats such as Direct Stream Digital (both DSD64 and DSD128) along with FLAC, plus of course AAC and MP3.

An unusual feature is the ability of the unit to stream material from the player to your phone. That can even be broadcast TV, and it can even work when you’re away from home, with the unit sending the stream via the Internet.

I haven’t laid hands on the Panasonic DMR-UBT1 yet, but over the years I’ve written reviews on more than twenty of its predecessors, and I’ve consistently been impressed. Most especially impressive has always been picture quality from broadcast digital TV and from DVDs. They’ve also typically allowed one to edit video recordings before “archiving” them from the hard disk drive to DVD or Blu-ray.

At $1099 this is a fairly pricey bit of kit, but probably lower cost than assembling all the functions from separate devices.

The Panasonic DMR-UBT1 will be available in late September 2017.