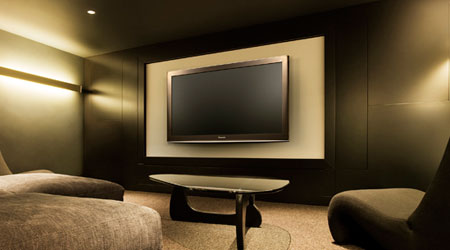 As it happens, precisely one year before this review, I reviewed here Panasonic’s Viera TH-P50G10A Plasma TV. Now, a year later, the Viera TH-P50VT20A has the same sized screen, but it is cheaper, lighter, more versatile, and produces a better picture. Most importantly, it supports 3D TV and Blu-ray 3D.

As for Blu-ray 3D, Panasonic has its new DMP-BDT300 Blu-ray player which supports that new standard.

Of course, the main feature of interest for both devices is the 3D, which I examine closely below. But note that while the TV supports Blu-ray 3D signals, and broadcast 3D signals, it does not have a 2D to 3D conversion system, unlike some of the competition. This isn’t really a loss, since the results to be obtained from those are fairly unpredictable.

Of course, the TV offers full HD resolution on its 127cm (50 inch) plasma display. Panasonic has let it be known that it has fully incorporated the ‘Kuro’ technology that it took over a couple of years ago from Pioneer, so the TV is basically one of the most advanced plasma models on the market, as suggested by its claimed dynamic contrast ratio of five million to one.

It includes Panasonic’s traditional support for SD cards, but also adds an Ethernet port and two USB sockets. Multimedia playback is supported by these (via the Digital Living Network Alliance standard in the case of networking), plus you can plug into the USB a WiFi dongle (optional) for more convenient use of some home networks, or a hard disk drive to turn the TV into a PVR, or a Skype camera to turn it into a video phone.

The DMP-BDT300 Blu-ray has all the usual premium Blu-ray player functions, including BonusView and BD-Live, except that unlike some of the competition, it doesn’t have flash memory built in to support the advanced functions. You will need to add your own SD card for that.

It has the unusual feature of bearing two HDMI outputs, a ‘main’ and a ‘sub’ (as in subsidiary, not subwoofer). If you purchased a good quality home theatre receiver last year, the year before or, in some cases, even this year, it may well fully handle high definition audio via HDMI, but not the new 3D video. This player allows you to feed the video out directly to the TV via the main HDMI output, and use the other one to supply audio to a home theatre receiver. Of course if your receiver doesn’t support HDMI audio at all, you can just use the regular digital audio outputs for Dolby Digital or DTS audio.

Let’s get right to the main selling point: 3D. I have heard complaints – and I think that they might be right – that the one set of 3D eyewear included with the TV is one set too few. Unless you are a pathological loner, expect to be forking out another $199 for a second set of eyewear.

Rather than using a rechargeable battery, the eyewear uses disposable lithium batteries. These are the readily available and fairly inexpensive CR2032 type, and Panasonic says that they are good for 75 hours.

As to 3D performance, I had available the two movies that Panasonic provides with the TV – Coraline 3D and Ice Age 3: Dawn of the Dinosaurs 3D – and a Panasonic demo disc with a number of short clips in 1080p or 720p that was included with the Blu-ray player. I also had a chance to see some of the 3D broadcasting of the World Cup soccer. With the discs, the results were generally very impressive. With the soccer, the results were variable depending pretty much on the camera angle.

The latter works by broadcasting at 1080i on a HD station. If you watch this on a 2D TV you will see two images on the screen, one on the left and one on the right. They are virtually the same as each other, but with slightly different angles to represent the different views from each eye. The TV processes this into 3DTV by splitting the picture in two, scaling each to full screen size and then showing them one after the other.

As with Blu-ray 3D, the rapid blanking and unblanking of the LCD shutter eyewear controls which image is seen by which eye. This TV has an infrared transmitter built in, and this sends a signal by which the eyewear can synchronise its actions to the flashing of the pictures on the screen. If you aren’t wearing the glasses, the flashing is so fast that you don’t see any flicker, but an overlaying of one picture by the other in a ghostly way.

With the eyewear working, though, the football game’s score banner assumed a forward position, floating in the top left corner of the screen in front of the action. For the action itself, the 3D effect was minimal for the wide shots encompassing a quarter or more of the field, but the ground-level video from boundaries was sometimes almost startling.

That 3D stuff is produced on the fly. The Blu-ray discs had millions lavished on their 3D presentations, since that was carefully developed for the cinema. And it showed. They were richly layered almost all the time. There was the occasional ‘poke you in the eye’ effect of something appearing to burst forth from the screen, but these were thankfully rare.

There are two potential downfalls on a technical level for 3D. The first is crosstalk, where one eye sees what only the other eye is supposed to see. In addition to looking bad, this can damage the 3D effect.

This TV was very good – although not perfect – on this front. With dark objects in front of light backgrounds, just occasionally I could make out a little bit of ghosting, but it took effort on my part. In the credits of Coraline, though, there was some visible ghosting of animated characters that were chasing each other around the scrolling credits against a black background. Not intrusive, but noticeable.

Still, the crosstalk performance was the best I’ve seen yet.

As was clarity. There was no visible smearing of the image. Movement remained sharp and clean.

I did find that the picture seemed less bright in 3D mode than the LCD TVs I’ve seen, and I found the best results were with the room lights turned low so as to allow my eyes to make better use of the available picture brightness. There was a touch of flicker when looking at fluorescent lights through the eyewear when they were in 3D mode, but it wasn’t particularly troubling. If you keep your eyes on the screen and not the room lights, this won’t be a problem.

For 2D performance, this combination was gorgeous. Regular TV reception was excellent and the picture was clean. Black levels were great and colours were at least as good as Panasonic’s usual impressive standards.

The glass screen didn’t appear to have an obvious anti-reflective surface, but it still seemed significantly less mirror-like than previous Panasonic models, making for better 2D viewing in a normally lit room since there were fewer reflections.

The Panasonic Viera TH-P50VT20A TV is an impressive TV all round, that also does impressive 3D. The DMP-BDT300 is Panasonic’s best Blu-ray player yet, at a pretty reasonable price. And since it has a WiFi dongle included, if you buy both as a package you won’t even need to plug either into your home network.