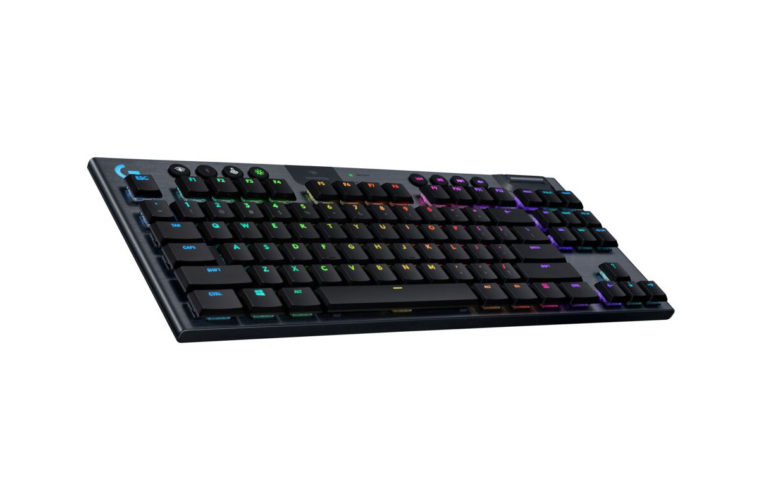 Gaming. Wireless. Can the two go together? Well, yes, as we see with the Logitech G915 TKL wireless keyboard.

Question: what’s TKL stand for? Answer: ten key less. Like the Logitech Pro X we reviewed a few months ago, the Logitech G915 TKL has full sized keys and a full-sized layout, except that it loses the numeric keyboard on the right. The idea here is that those keys just get in the way of gamers. Without them, the mouse is closer to hand. To be blunt, this isn’t a cost-saving omission but a performance enhancement.

In some ways, the Logitech G915 TKL is quite similar to the Logitech Pro X. In others, very different. For one thing, while the Pro X is wired, the Logitech G915 TKL is very much wireless. It comes with a Lightspeed dongle to plug into your computer. But if you prefer, you can connect via Bluetooth. Logitech boasts of a one millisecond response time with the dongle. If you’re gaming, you’d probably want the fastest possible speed. But having the Bluetooth option could be useful.

(I have been using the Logitech G703 gaming mouse for three years. It’s still going strong, except for some of the LEDs failing, forcing me to resort to other colours. Naturally I wondered if I could have both Lightspeed-supporting devices connected to the one dongle. Apparently not. Resign yourself to using two USB inputs: one for the mouse and one for the keyboard.)

The Logitech G915 TKL is built on a magnesium alloy chassis. The keys are mechanical – “GL Clicky” on the review keyboard – and low in profile. They are certainly thinner than the keys of the Logitech G413 Carbon wired keyboard I normally use. So they don’t stand as proudly up from the body of the keyboard. I thought that their travel was similar, but I see that it’s a little shallower at 2.7mm versus their 3.2mm. But the actuation point is the same, at 1.5mm down.

Initially the keyboard felt a little, oh, I don’t know, clattery perhaps? But I soon fell into the groove of it and rapidly began enjoying the feel. It turns out that there are options. You can purchase the same keyboard with “GL Linear” – “A smooth, fluid keystroke” – or “GL Tactile” – “A discernible tactile bump” – switches instead.

Even though the review keyboard was thoroughly black, I see that there’s also a “white” version. As far as I can judge, this version seems to have a brushed aluminium finish to the body and white keys.

As you might imagine, I’m pounding these very words out using this keyboard. As I write, the letter markings on almost all the keys are glowing a pleasing yellow. You see, despite the Logitech G915 TKL keyboard being wireless, the keys are backlit. Backlit with three coloured LEDs so that there are effectively millions of colours to choose from.

To fiddle with the colours, you need to install the Logitech G HUB software, which I’d done long ago for all the Logitech stuff I have plugged into my computer. This software lets you configure the keyboard very significantly, including applying keys, actions or macros to the function keys, configuring which keys you want to disable in “games mode”, and of course configuring the backlighting.

With that last, there are a bunch of presets – Color Wave, Starlight (one key flicks into life with a different colour), and a bunch of others. Fortunately, one preset is “Fixed” in which you can set the fixed colour for the whole keyboard. An especially strange one is “Screen Sampler”, which grabs an image of your computer screen and somehow makes it influence the colours of the keyboard. There are also some even more full-blown animations. Heck, you can even create a new animation yourself!

But, for me, life’s too short. It strikes me that this is something of a case of: it’s technically possible, so why not provide it? I applaud that. Just because I am not prepared to delve quite so deeply into these things doesn’t mean that some might not derive some pleasure.

Finally, there’s also a “Freestyle” tab for the lighting.  You can set the colour in any combination for individual keys, groups of keys or whatever.

The one problem I had with this keyboard was prompted by the way the lights are inset into the keys. They only illuminate the top part of each key, so Logitech has put the letters, numbers, F-numbers and such at the upper part of each key. For the most part that doesn’t matter, but for the number row at the top, the ampersand and the hash and the carat and so on are printed on the key faces underneath the brightly illuminated main characters, 7, 3 and 6 in this case. And the printing is medium grey on black, and really quite hard to read.

The “white” keyboard has something of an advantage here, as far as I can see from its illustrations. The secondary characters are printed on the white keys in an unapologetically prominent black. Very easy to read.

I should note that there are some special keys in a row across the top. Two buttons are for connecting to the Lightspeed dongle or Bluetooth. One invokes games mode and one cycles through five levels of keyboard light brightness (one of them being off).

Then there are three transport control keys for whatever audio player you’re running on your computer. They worked appropriately with TIDAL and the JRiver Media Center on my computer. As did the final key – Mute – and the barrel-style volume control.

The Logitech G915 TKL keyboard uses an internal rechargeable battery. You charge it up using the included Micro-B USB cable. There’s an on/off switch if you want to keep the battery running longer. The battery is rated at 40 hours of use.  By default – you can use the Logitech G HUB software to adjust these up to 15 minutes – the key backlights dim to 50% after one minute and switches off entirely after five minutes.

There’s a battery meter – a precision one that tells you not just the percentage of charge but the estimated number of hours of use remaining. On first full charge and plug in, it indicated 40 hours. As I’m writing now, it tells me that I’ve got about 33 hours more use. That seems about right.

Also included with the keyboard is an adaptor. It converts Micro-B USB into regular Type A USB. Using that, the charge cable becomes an extension cable for the dongle. If your computer is in an awkward position, you can put the receiver in a better place by this expedient.

Okay, I confess: I got lazy. I was fairly sure I’d want to return to my regular Logitech G413 wired keyboard. So rather than pull out its connection and replace it with the G915TKL’s dongle, I simply plugged the dongle into one of the USB sockets atop the tower under my desk. I pushed the G413 back on the desk to make room. It still worked, but I had no plans to use it while reviewing the present keyboard.

And that would have been the end of that, not even worth mentioning, until I saw one of the indicator LEDs on the G413 light up unexpectedly. It turned out that whenever I tapped the CAPS key on the G915 TKL keyboard, it also activated caps lock for the G413. And vice versa.

What else? Ah, the shift key on either keyboard applied to the other as well. But not the Games key. What was going on? Well, it turns out that my surprise was simply due to a mistaken assumption on my part. I’ve always assumed that a keyboard sends a code to the computer for the lowercase letter a, and a different one for the uppercase letter A. Perhaps the Logitech G HUB software was reflecting the state of each keyboard back to the other? To test, I grabbed a cheap wired keyboard that I bought many years ago, and keep in a cupboard just in case I need some old-school wired keyboard. This keyboard’s Caps and Shift keys also activated that mode on the other keyboards.

All this suggests to me that in Windows computers, is the code for b and B are the same. But the keyboard sends a separate code to indicate that it’s in a caps lock state, and yet another if the shift key is currently pressed. The computer acts on the codes accordingly: if either the caps lock or shift codes are active, then the computer interprets the codes of the character keys as uppercase, lowercase or shifted as appropriate.

And, for some reason, the computer tells all attached keyboards its current state with regard to Caps and Shift.

(The Game mode key isn’t an OS function, so it doesn’t get reflected to other keyboards.)

Finally, having a play around with an old “regular” computer keyboard made me realise how lousy regular keyboards are. The feel of the Logitech G915 TKL is almost incomparably better than a regular keyboard, in terms of touch, feel and a sense of certainty.