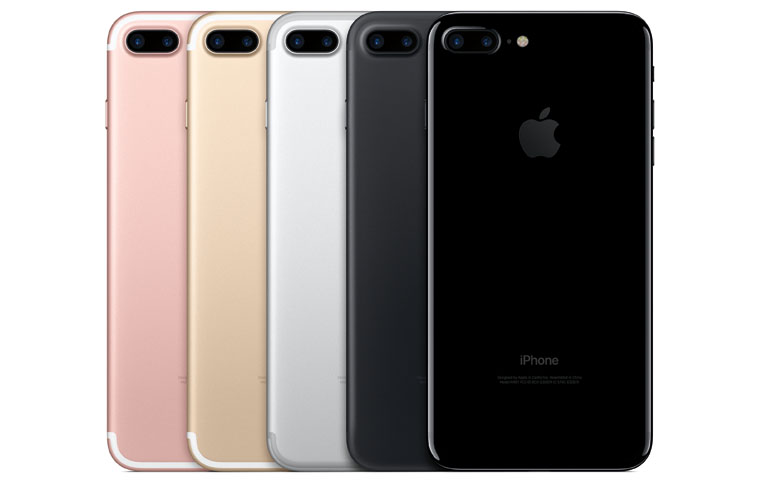 The iPhone 7 Plus is, of course, Apple’s large screen version of the iPhone. Unsurprisingly, it is in many ways identical, or at least very similar, to the lower cost and smaller iPhone 7. So rather than coming up with new words to say the same things, I’m only going to talk about the differences here, plus perhaps one or two more things that should be highlighted. Read everything else in the iPhone 7 review.

That increase allows two significant differences: a larger screen and a larger battery. The other major difference is the rear camera.

More space means room for a bigger battery. Rather than the 1960mAh battery of the iPhone 7, the iPhone 7 Plus gets 2900mAh, a 48% increase. Apple suggests that this pushes up things like wireless audio playback from 40 to 60 hours, unsurprisingly a fifty percent increase. Official standby time has gone from 10 to 16 days. Talk time from 14 to 21 hours.

But a bigger screen uses more power. Wireless video playback time is officially 14 hours, slightly up on the 13 hours of the iPhone 7.

Finally, there’s the camera. Or cameras. The iPhone 7 Plus has the same 12 megapixel f/1.8 camera that’s in the iPhone 7, but has a second camera right next to it. Also with 12 megapixels, this offers a maximum f/2.8 aperture and can provide an optical zoom of 2x. Video up to 4K at 30 frames per second is available.

Overall the differences in use between the iPhone 7 and the iPhone 7 Plus weren’t enormous. The bigger screen was easier on the eyes, just in terms of things being a little bit bigger. In general use the phone was pretty much identical.

But there were differences. One small one was the fingerprint sensor/home button. This is not a real button, but when you apply a certain amount of pressure it imparts a small vibration to produce the feeling that you’re pressing an actual button that’s clicking. I remarked in the review of the iPhone 7 that “what it most felt like was as if the phone was creaking under the pressure”. But there wasn’t that sense with this phone. Different size? Different tuning to the effect. Different me in the month or two since I wrote that review? Who knows.

The battery life was seriously impressive. I know this not because I’m a heavy user, but because very little power was consumed during my light usage. Even though with iOS10 the phone frequently lights up the screen to show notifications, on a regular day (that would consume 50% of the battery on my Samsung Galaxy S6) the iOS battery meter would fall away by just 10%. Consistently.

One game I sometimes play – 10101, which was popular a while back – initially gave what I though was a hint on what was going on. It would slow right down from time to time and become difficult to play, so I was thinking that perhaps there was some CPU throttling going on. But after a couple of weeks this behaviour completely disappeared. Perhaps the power management system developed a better understanding of the app.

The big difference is the additional camera. Using the new addition was extremely simple. Whenever you start up the camera app, it opens with the conventional wide-angle camera. If you zoom to anything less than 2x, that camera remains engaged (the zooming is all digital processing). But if you tap on the zoom indicator (tapping toggles between 1x and 2x) to the 2x position, or you zoom to 2x or greater (again, anything greater than 2x is digital processing), then the telephoto camera is engaged instead.

Not surprisingly, that gave far better results than could be achieved with any standard wide angle phone camera, because a larger view of the thing being photographed is being captured, rather than being created through electronics.

The EXIF data in the photographs report the focal length of the regular camera as being 28mm, 35mm equivalent, and that of the telephoto camera as being 57mm. Both cameras captured identical resolutions: 4032 x 3024 pixels (4:3 aspect, obviously).

A word on a couple of photographic features. First, panoramic mode. I loved the implementation. None of this taking multiple shots with careful overlaps so that they can be stitched together in phone or later. None of this downscaling to low resolution. Instead, you select the mode, frame one end of the view you wish to capture in panorama, and then rotate slowly across the view. The phone takes all the information it needs to generate the panorama, taking more than five pictures throughout and stitching them together and trimming in order to produce a fine, full resolution result. The final size depends on how much trimming is required, mostly at top and bottom, to avoid raggedy edges. Typically the resolution was around 16,300 pixels across by 3800 down. Full details and extremely well merged boundaries were standard.

Second, portrait mode. This was skated over in early reviews because it’s part of the OS and wasn’t ready at the time of original release. What this does is switch to the telephoto camera, identify the person in the shot, and put everything but the person out of focus. In other words, it simulates a shallow depth of field. This provides are quite effective result, so long as you don’t look too closely. In practice, it can also soften things that are supposed to be in focus. But it keeps your original photo as well, so if you don’t like the result, nothing is lost.

If you like the Apple ecosystem, and want a bigger screen, longer battery life or better camera than the standard iPhone 7, then the iPhone 7 Plus is for you.