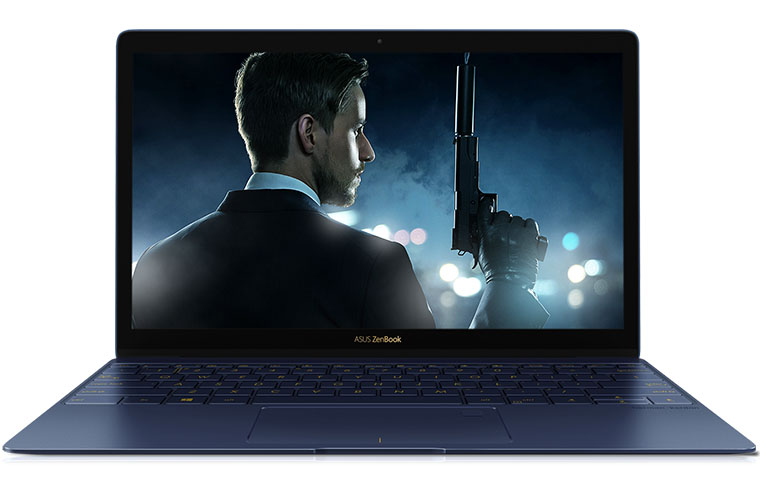 Screw balancing cost and performance and convenience and size and style. The Asus ZenBook 3 UX390UA notebook computer is all about prestige. These days a notebook gets prestige by looking gorgeous and being slim. Which is precisely what this computer offers. Although a fair bit of performance has been tossed in as well.

So first, the style and slimness. It excels on both fronts. The “aerospace grade” aluminium case is finished in deep blue, similar in tone to the bluing of a gun, although without the deep lustre. The underside is matt, while the top has a machined look, the lines visible by not perceptible to the touch. This very attractive look is highlighted by a gold-coloured ASUS in the centre, and a gold edge to the display.

It gets into sub-half inch thickness category very comfortably, measuring 11.9mm. Closed it’s 296mm wide and 191.2mm deep. In other words, an A4 sheet of paper will overlap it. The weight is 910 grams.

The ZenBook comes with a very attractive stitched sleeve cover, too. The kind of thing you’d pay $50 to $100 for separately.

Naturally it runs Windows 10. In Australia it comes, apart from the processor, with a fixed configuration, take it or leave it. I’d suggest taking it, since that configuration includes a 512GB solid state drive, 8GB of RAM and either an Intel Core i5 7200U or i7 7500U processor. The review unit was the latter. The former has an RRP of $2499.

The display is twelve and a half inches in size with full HD (1920 by 1080 pixel). It’s not a touch screen. This is a traditional notebook. Graphics are provided by the processor integrated Intel HD Graphics 620, so of course there’s support for additional monitors. The glass of the display is made from the robust Corning Gorilla Glass 4. Asus says that the screen contrast ratio is 1000:1 and that it can reproduce 72% of the NTSC colour space.

There’s rather less space at the bottom of the display area than there is typically with notebook computers. In fact, it makes the screen look wider than the usual 16:9 ratio, but my measurements confirmed that it had the normal aspect ratio.

What didn’t have the normal aspect ratio – if I can use the term – was the keyboard. At first I thought it was a full size keyboard, but after my fingers took a while to adjust, producing in the interim a higher than usual number of typos, I made a closer inspection. The keyboard is actually 4.3% wider than a regular keyboard, but also less deep. But the main typing problem I had was with the depth. From the top of the number keys to the top of the space bar was 67.5mm on this computer compared to 75.5mm on my desktop and a neat 75mm on my Surface Pro 4’s type cover and 74mm on a MacBook Pro. That’s a ten per cent reduction.

All that became a bit weirder when I looked at Asus’ website, which was boasting about the ZenBook 3’s keyboard:

The best ultraportable laptop doesn’t deserve a keyboard that’s an afterthought, and with ZenBook 3 it’s been engineered into the design from the start. The full-size backlit keyboard stretches from edge to edge, with just a 2.1mm bezel at each side, and has a key pitch (the distance between the center of each key) of 19.8mm, the same as most desktop keyboards.

Magnifying glass and ruler in hand, I started investigating keyboards. Five of the five desktop keyboards in my home had a key pitch of 19.0mm, not 19.8mm. Two MacBooks, a Mac wireless keyboard, a Toshiba and a Samsung laptop, all 19mm. From the US Government’s Occupational Safety and Health Administration: “Generally, the horizontal spacing between the centers of two keys should be 0.71-0.75 inches (18-19 mm).” Only the Asus Zenbook 3 had a 19.8mm keyboard pitch.

The webcam is VGA resolution and does not support Windows Hello face recognition logon, but there’s a fingerprint scanner in the corner of the touchpad, so you can get fast logon that way. (Truth be told, this is probably faster than face recognition anyway.)

The computer has just two connections: a 3.5mm socket for headphones and a single USB Type-C port. It uses the latter for all wired digital connectivity and for charging. Bundled with the computer is an ASUS USB Type-C hub, with a USB Type-C socket (which you can charge through while using the other connections), a USB Type-A socket and a HDMI display output.

Network connectivity is wireless of course, with dual band 802.11ac WiFi and nominal throughput of up to 867Mbps.

The built in speakers are, somehow, four channel units (only two are obvious) designed in conjunction with Harman Kardon.

The computer performed precisely as I expected, which is to say with very snappy performance and high responsiveness. The headline speed of the i7 processor was 2.7GHz, but it can “turbo” boost to 3.3GHz when required. In practice. The office applications (installed by default, ready for activation if you have a subscription or are prepared to pay the money) opened in something approaching reasonable speed (they tend to be slow, regardless of the hardware). I loaded some of my favourite audio processing software and had it do some heavy number crunching, and the results again were pleasingly quick.

But using the computer required a bit of wrestling with some of the crapware Asus has loaded into the system. There were ten Asus-branded apps. One of them – Asus Live Update – is probably important. It wanted to update the computer BIOS the first time I switched it on, which I of course let it do. But Asus Giftbox? This came to my attention because it wanted to update itself. It seems to be an interface to store portal apps – Amazon, Deezer , Best Buy (Best Buy? In Australia?) – Windows Store apps (what’s wrong with the, you know, actual Windows Store?) and offers some discounts on a couple of commercial software packages. It reminded me of the discount offers you get on the back of your grocery store receipts.

The USB Type-C socket supported the usual connections. I ran a full UltraHD display for a while using this.

The notebook’s display was excellent: bright and high in contrast and with sufficient rejection of ambient light to be comfortable to use outdoors, so long as the sun wasn’t shining directly onto it.

Those little Harman Kardon assisted speakers were actually pretty decent too, apart from the usual absence of anything resembling bass. They’re probably as fine sounding as is possible to manage from such a small thing.

As for that keyboard, one learns. Indeed, I find that I can learn to use two quite different keyboards at a time, switching between them without difficulty. It just takes a little time. After a couple of thousand words, I was fine. And apart from the spacing, the keyboard was rather good to type on. The keys have 0.8mm of travel and are well supported, with no bowing or other weakness in the centre of the keyboard. Nice.

The Home, End, Page Up and Page Down keys are secondary functions of the arrow keys, so you’ll have to get used to using the Fn key to access them. Likewise, the Insert key is secondary to Delete. There is no NumLock, nor a numeric keyboard hidden under letter keys, so spreadsheet work might be a bit slower for some.

The touchpad was excellent, smooth to the touch, highly responsive and with multitouch support. The fingerprint scanner in the corner was accurate and made for far more convenient unlocking than entering a PIN or password.

While on practical mechanical matters, I’d like to note that even though the computer is extremely light, it’s still possible to open the lid up with just one hand, thanks to a fairly light and very smooth hinge.

On battery the screen switches to forty percent brightness level (you can crank it up, of course, and you’ll probably want to where there’s bright light in the area where you’re using the computer). Running an UltraHD clip using the VLC media player, the computer kept going for 2 hours and 47 before switching off.

The clip ran beautifully smoothly, thanks to the performance of this computer. But by the time it had gotten to ten per cent battery remaining, it had tamped down the CPU performance so much – it was running at 0.35GHz instead of the nominal 2.7GHz processor speed – that the video had frozen on screen, while the VLC video progress bar continued its relentless cycle of repeatedly progressing through the clip.

As usual, the switch-off point was when 5% of the battery was allegedly remaining. That’s the “critical battery level”, something that can’t be changed by users unless they’re willing to delve deeply into using the powercfg command in a command prompt window. What I find puzzling is that Windows insists on reporting the time remaining based on the battery running down to zero. Here’s what Windows was reporting a couple of minutes before the computer switched off:

No, not 24 minutes. Two minutes if that. That is a Windows issue, though, not an Asus one.

At the other extreme: letting the battery run down while the computer’s doing nothing much apart from showing the desktop and displaying the state of the battery charge (plus occasionally checking to see if OneDrive needed syncing – I forgot to switch that off), the computer ran for an impressive 13 hours, 12 minutes and 20 seconds before switching off at the magic 5% remaining point.

In real life, you’re going to get somewhere between those two extremes.

The Asus ZenBook 3 is a first class, super light weight, super slim notebook computer with strong performance. Don’t let my remarks on the keyboard put you off – I dwelt on it principally because I was bemused as to why Asus chose non-standard key widths – because it was actually a fine keyboard in use, and one soon gets used to the size and shape.