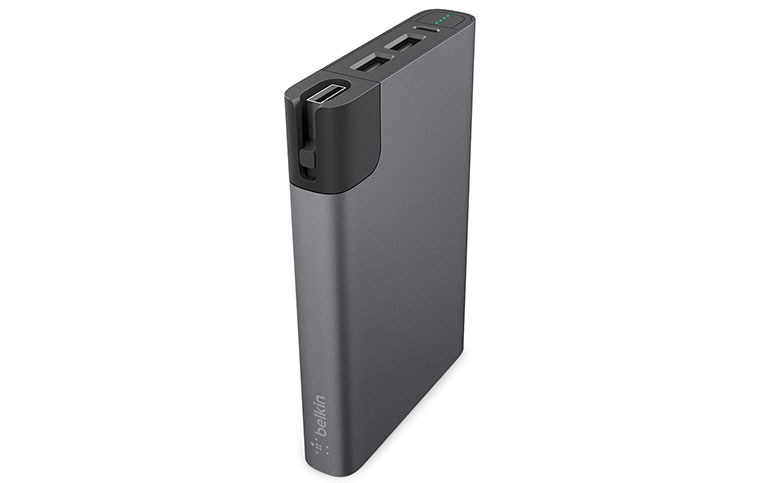 That new Belkin USB Type-C charging equipment I wrote about the yesterday reminded me of an overdue review. I mentioned in that piece the Belkin Mixit Power RockStar with its 6600mAh capacity. This one, the Belkin Mixit RockStar 10000 battery pack contains, as the name suggests, 10,000 milliamp-hours of energy.

All that takes a decent sized battery. The RockStar 10000 weighs a not inconsiderable 376 grams, precisely twice the weight of an iPhone 7 Plus. That includes the two cables supplied with it. One fits Micro-B USB devices, the other Apple Lightning devices. There’s a receptacle in the side which will hold one or the other cable with a gentle magnetic snap at the bottom. I’m guessing that Belkin reckons most people will only need to take one of the cables with them.

But of course, that’s only the supplied cables. You can charge other devices, such as those with USB Type-C inputs, just by using a USB Type-A to USB Type-C cable.

Heavy and quite large: 150mm long, 81mm wide and 19mm thick. It has what looks like an aluminium casing with black highlights. There are two standard USB sockets for charging two devices at once, plus a Micro-B USB socket for charging up the RockStar itself. It can deliver up to 2.4 amps from each output. There are four tiny LEDs in a button which show the charge level. These are on while its charging, or for a few seconds if you press the button.

The RockStar is MFi – that is “Made for iPhone/iPod/iPad” – certified by Apple. I’d guess that it’d be certified for Android stuff too if there were such a program.

In addition, it has a $2500 “Connected Equipment Warranty”. If somehow it went beserk and fried your phone, you’d be covered for replacement.

There’s not a whole lot you can do in testing a device like this, other than trying to charge up some things to see how it goes.

So, I got out the Samsung Galaxy S7 (3000mAh battery), which I’m not using right now but which is my “home” phone, and ran a video loop on it until it shut down, exhausted. Meanwhile I made sure the RockStar 10000 was fully charged up.

When the phone was dead, I plugged it into the RockStar. When it hit one per cent charged, I switched on the phone. Then from time to time I noted the state of charge.

It charged up the phone somewhat faster than a standard, dumb, one amp wall charger, but not as fast as smarter fast charger. Getting to full charge took 109 minutes. From around 10% charge up to around 85%, it was pouring it at a rate of better than a 10% increase in charge per ten minutes. It was slower at the start (no doubt thanks to the switching on and phone, start-up housekeeping) and especially towards the end. For the last couple of percent the charge rate slowed to more than half an hour per 10%.

That done, I found that my old iPad Mini (battery: 4440mAh) was dead flat, so I plugged it in, switching it on as soon as it let me (they won’t start up on power until the battery reaches a certain point). That ran for a couple of hours. But topped out at 89%, when the Rockstar itself was exhausted.

No, those figures don’t add up to the 10000mAh headline capacity. But there are losses, and consumption by the devices being charged in parallel to the battery being filled. I’m pretty impressed. I’d be confident of getting two full Samsung Galaxy S7/S8 charges out of it.

After running it all the way down to empty I charged it up again. I missed the precise moment that full charge was achieved, but it was certainly between five and six hours. The unit doesn’t itself support being fast charged, but then it presumably doesn’t have a smart phone SoC processor.

The Belkin Mixit RockStar 10000 is not a light weight thing designed to give you just that bit longer on the phone. It’s a serious power backup for your iOS or Android devices, and packs enough oomph to handle even tablets. It also seemed quite happy to hold a charge for a few weeks. It’s an impressive device for those who really need plenty of power.