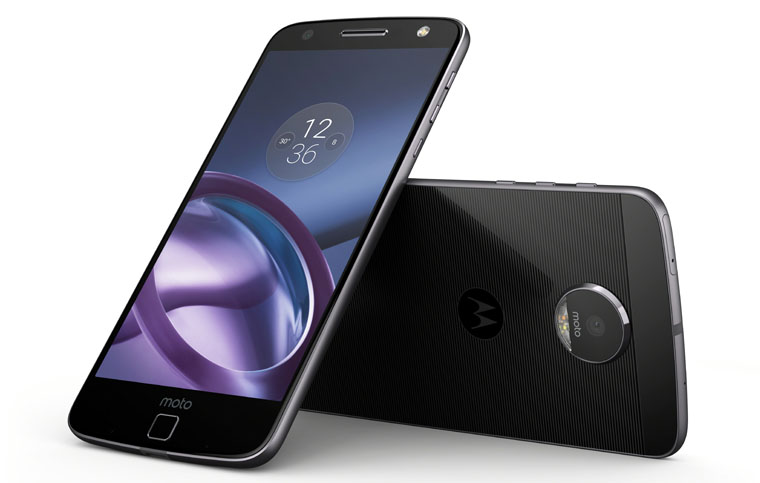 The Motorola Moto Z is the company’s premium smart phone model. And a fine phone it is, too, all by itself. But it turns out to be, with the addition of a number of options, the most versatile phone yet.

Before getting to those options, let’s look at the basic phone itself, although “basic” would seem to be an inappropriate word in the context of this phone. For example, the Moto Z is, according to the company, “the world’s thinnest premium smartphone ever” at 5.2mm thick. Technically it’s thicker than that because of the camera bump. My Vernier callipers indicate that it’s 7.2mm thick there.

Nonetheless, the great bulk of the body is not just thin, but obviously thin to the eye. Motorola says that it is made from “military aircraft-grade aluminum and stainless steel”, but even so I wasn’t willing to put it to the bend test in my back pocket. Phones ought to be treated with reasonable respect.

In just about every way this phone is specced up. Qualcomm Snapdragon 820 processor running at up to 1.8GHz? For sure. But with 4GB RAM instead of the frequently used 3GB to ensure plenty of speed. Built in storage of 64GB instead of the more common 32GB provided for a phone with expandable memory. The expansion supports up to two terabytes on microSD (if and when such high capacities become available).

The Corning Gorilla Glass (version not specified) covers a five and half inch QuadHD (1440 by 2560 pixel) display which uses AMOLED technology.

The rear camera is a 13 megapixel unit with f/1.8 maximum aperture. It features optical image stabilisation, laser auto focus and a dual LED “Colour Correlated Temperature” flash. The camera can be invoked from lock mode by twisting the camera twice. If operating, another double flick of the wrist switches it to the front 5MP f/2.2 camera. The front camera has its own flash, rather than relying on the screen to light the subject.

The Bluetooth is version 4.1 LE and there’s NFC support. WiFi is dual band ac with MIMO. There’s every sensor imaginable (I exaggerate only slightly), including a fingerprint sensor. There are four microphones, which I imagine serves some useful purpose. The “loudspeaker” is “front-ported”, which had me looking for a bass reflex port until I realised that they were just talking about where the sound comes out.

The wired interface is USB Type-C and there is no 3.5mm headphone/socket connection. Instead there’s a tiny DAC for the USB Type-C socket, somewhat like that supplied with the iPhone 7, so that you can use wired headphones/earphones. This is kind of understandable given the 5.2mm body thickness.

There are four physical control buttons. Two for the volume are on the right side, with the power key below them. Then there’s a fourth at the bottom front and it is on this that the fingerprint sensor is located. Pretty soon I started to ignore the side power key – aside from using it with the down volume button to take screen shots. The bottom front key with the integrated fingerprint sensor, made for quick, one touch switching on and off and seemed to be utterly reliable.

Note, this is not the Android home key. That’s a soft one that appears in the display area.

The battery packs 2600mAh capacity. Motorola rates it with a 24 hours “mixed usage” life. It can be “Turbo” charged – five minutes on the charger can give another seven hours of life.

Near the bottom of the rear are eighteen gold-plated contacts. These are the interface for the Moto Mods – the enhancement modules. Each module has a cutout to accommodate the two centimetre circular camera bump. They are held in place magnetically, with two magnetic points at the top and another two at the bottom.

I know, that sounds like an uncertain arrangement, but in practice each of the Mods was held firmly in place. I used the battery pack and decorative back plate Mods extensively while on the move, and the camera back to a lesser extent, and none felt in the slightest bit insecure. Yet get your finger print into the slot at the base and you can whip a Mod off in an instant and replace it with another.

I don’t think I’ve ever seen a mounting system of any kind work so well. The phone of course recognises the addition of Mod and provides a quick tutorial the first time each is added. One of the Mods draws power from the phone, one supplies it, one does nothing and two have their own onboard batteries to power their own functions.

The Android 6.01 implementation was mostly standard with a few Moto additions. The only real irritation was the lack of a Hotspot button – something I use fairly frequently – on the quick launch screen. A bit of googling found a way to invoke a lower level settings menu which enabled this, but one shouldn’t have to resort to that.

Overall speed according to the Quadrant benchmarking app was about 40,000 on the apps index, compared to around 30,000 for my Samsung Galaxy S6. That seems to be about the norm for a phone running that CPU.

The screen was gorgeous, thanks to AMOLED. The colours were rich, the blacks deep, and the whole thing was surprisingly clear even under outdoor conditions, so long as the sun wasn’t falling directly on the screen. That made it easy to take good photos under a wide range of circumstances.

On a couple of occasions I retrieved the phone from my pocket to find the screen alive with a half-dialled phone number or a random Web page open. I’m not quite sure how I managed that since I normally put the phone in my pocket the right way up, which means the fingerprint sensor is at the bottom. One of those mysteries I guess. It did only happen a couple of times in the fortnight I used this as my main phone.

The camera has some very effective manual controls, presented as arcs over the screen. Things like focus, white balance and so on can be adjusted individually while leaving everything else on auto setting, or all the settings can be brought up at once.

In auto mode the camera was fast and delivered a generally fine photograph. There was little to distinguish it from the quality of the Samsung Galaxy S6 I use as a yardstick. The Moto Z did a little better on a shot where the sun could have interfered with light metering. The Samsung did better on a rose, allowing the petals to be more clearly distinguished. A just-after-sunset shot taken opportunistically was a touch grainy, but delivered excellent balance from the black of the night to the white of a porch light.

I will cover three of the Mods in an article coming soon. They are very cool. Just to remind us, they are a Hasselblad 10x zoom camera, a JBL speaker, a compact projector so that your screen can be displayed at a larger size on a screen or a wall.

The decorative cover (it’s called a “Style Cap”) is just that, with a range of finishes available. It costs $29 or $39 depending on that finish. It of course has a hole for the camera. It brings the thickness of the phone up to 7.4mm, and tends to provide greater protection to the camera lens since instead of protruding, with a cover in place it is very slightly recessed.

The Incipio battery cannot be charged independently. It must be attached to the phone to charge. Because of the ease with which the Mods can be changed, a heavy user could take a number of these with him or her, but the recharging can only be one at a time on the phone.

It has a hole for the camera on the phone body. With the offGRID in place the phone measures 11.1mm thick.

So, just a standalone phone the Motorola Moto Z is a fine, powerful unit with an excellent screen and strong camera performance. To that we must add the options, which aren’t inexpensive, but can provide very useful enhancements to functionality. And it’s to those I will return in a few days.