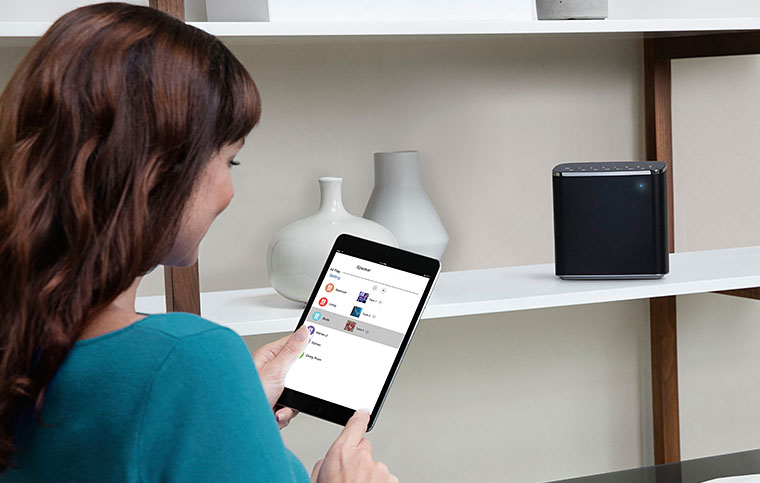 Seemingly every consumer electronics company has a wireless multiroom audio system of some sort, and Panasonic isn’t the kind of company to be left behind. Rather than its own proprietary system, though, it uses the Qualcomm AllPlay system, which means that you can mix and match with other devices from Hitachi, Monster, Musaic, Median and Laser (see our review here). Of course, to properly review any multiroom system requires at least two devices, so Panasonic sent down two of its SC-ALL05GN Wireless Speaker Systems.

The Panasonic SC-ALL05GN Wireless Speaker System is a network-enabled, Bluetooth-enabled speaker which is portable, thanks to the built in battery, and is reasonably waterproof. On that subject, the speakers are rated IPX5/IPX7, which means they can take a spray of water from a nozzle for three minutes, and can survive up to a meter of water immersion for half an hour.

The battery is rated at 8.5 or 9 hours of operation for WiFi (both 2.4GHz and 5GHz bands supported, 802.11n supported) or Bluetooth use. There are no analogue or other inputs (apart from an Ethernet connection which you can use instead of WiFi), so these are wireless only speakers.

They come with power packs so they can run from a wall socket, but it’s simple to unplug them and clip into the place the small panel for each that covers the power and Ethernet sockets.

They’re compact, standing 179mm tall, 170mm wide and only 76mm deep. They are surrounded on all sides by what feels like a metal grille, and have a shiny, tilted top panel on which all the controls – all touch controls – reside. Those controls are for simple things like play and pause and skipping tracks and for selecting radio presents.

Radio, did I say radio? Well, Internet radio. There’s no conventional tuner but two “Music Services” are supported through the control app – Spotify and AllPlay Radio. It’s the latter which can keyed with half a dozen presets. Anyone can use the radio, but you’ll need a premium subscription to use Spotify on these speakers.

Those controls are fine for basic use, but you’ll be using the Panasonic Music Streaming app on an Android or iOS device for things associated with setting up and controlling multiroom functionality.

As for your local music, you can play stuff from any DLNA (Digital Living Network Alliance) servers on your system, plus any music (kind of, as we’ll see) which is residing on the device you’ve got the control app on.

As for audio quality, each unit has, well, something or other built in according to the self-contradicting website specifications. The manual’s more helpful. Each unit has two 65mm “full range” speakers built in, along with two 65mm passive radiators. Passive radiators are a way of tuning the bass performance of a system to extend its effective output.

The amplifiers are rated at ten watts per channel (at 10% distortion) when the system is connected to power. That reduces to four watts when running from the battery.

I used an iPad Mini 4 as the control device for the system. Setting up the speakers was, well not super simple, but more akin to following carefully a reasonably straightforward recipe, step by step. That was in large part because I chose to connect both speakers via WiFi rather than Ethernet, since I figure that’s a major key to their portability and convenience. The recipe is laid out in the Panasonic Music Streaming app, available in the App Store. There’s little difference if you are using Android, except that you’ll be getting the app from the Play Store instead.

When the app is installed you identify the speaker model in the app, and then switch on the speaker. It sets itself as a temporary WiFi access point which you connect to with your device. Then you can key in the network password and the iPad/Android device is reconnected to the normal WiFi network. A brief tutorial in the app shows you how to use it.

I did all that and it worked perfectly well. Then I did it again for the other speaker. Somewhere in there is the opportunity to give names to the speakers. Typically you’ll use the name of the room in which each is located.

At that point I was ready to start streaming some music, but the app then advised that there was an updated firmware for the speakers, so did I want to install it then or later?

Well, a review of a product with obsolete firmware wouldn’t be much good. The update panel said it’d take about eight minutes, which is about what it took, for each one.

That seems to be a common feature of network connected speakers, where the first time you plug them in they need to install software that was updated since they were first sent out from the factory.

With that done, use was super easy once I’d gotten my head around the organisational framework used in the app. It wasn’t hard. An icon in the top left corner of the screen shows which speaker you’re currently controlling. You select what you want to play using the Browse pop-up at the bottom. From there you can choose local music, available servers or one of the two music servers. In the latter case selecting one takes you to the relevant app. They aren’t integrated into the Panasonic Music Streaming app. If you use Spotify, you’ll then need to choose the speaker or speakers you want within the Spotify app.

On the iPad Mini 4, only the music held in the standard location for the Music app was made available. I also have a lot of music on the device in a separate folder accessed by the Onkyo HF Player, but this was invisible to the Panasonic app.

If you touch the speaker icon at top left, a panel appears showing the speakers which are available and through which you can do things like group two or more together. That’s done just by dragging one icon onto the other one.

Of course, each speaker can play different music to the others if it isn’t grouped. Digging down into the controls, it turned out that you can also set each speaker to either “Left” or “Right” or leave each in “Stereo” mode. If you have two speakers they can thereby work as a stereo pair. Oddly, you can have any speaker set to “Left” or “Right” even if it isn’t paired, although why you would is beyond my understanding.

If you have speakers grouped, then when you go to adjust them in the Panasonic app a set of additional sliders will pop up to allow you to control the individual speakers. If you use the touch volume control on one of the units, only its volume will adjust, not the others in the group.

The AllPlay Radio app doesn’t re-invent Internet Radio. It employs TuneIn – one of the two big players in the field – as its engine. There are tens of thousands of stations available from all over the world, yet even so coverage is not complete. I was unable to find, for example, 2CC, one of my local commercial radio stations. Programming the presents is simple. Use the app to find one of your favourites and start it playing, then hold down one of the present buttons for a few seconds until you get the second “beep” sound. There, done.

The device plays back music in a variety of formats including high resolution ones. I tested it with MP3, iTunes-friendly AAC, FLAC and Apple Lossless, including some music with 192kHz, 24 bit encoding. All worked beautifully except that “gapless” playback (ie. not leaving a short break between run-on tracks) wasn’t supported.

That said, the sound quality was about what you’d expect from a device of this nature. Respectable, with a reasonably boppy bass end and a solid, inoffensive sound. High resolution it isn’t. Good mid-level sound for the non-audiophile, with reasonable volume levels available? For sure.

The Panasonic SC-ALL05GN is a very good multiroom implementation with sound that would suit many. It’s fairly versatile, can be taken around the yard so long as it’s within WiFi range, or even taken away and used with Bluetooth. You can even use Bluetooth to one of the speakers and have the others “restream” it. The sync isn’t too bad either.

And I do like the idea of a non-proprietary system.