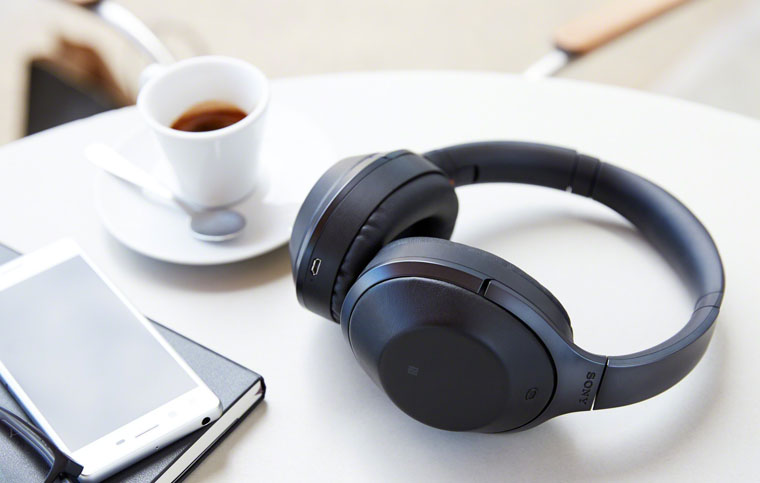 How do you know if noise cancelling headphones are serious? One tell is whether they are “on ear” or “over ear”. Headphones that fully surround year ears – “over ear” models – don’t have to work anywhere near as hard on the electronic front against noise because the surround itself provides some noise insulation.

These are not cheapies. Nor are they small. The Sony MDR-1000X headphones give every appearance of the Sony engineers having subordinated design decisions mostly to doing the job for which they’re intended. That is to produce high quality sound, reduce ambient noise and provide quality Bluetooth connectivity.

So of course they surround your ears (“circumaural” this is called), sealing them off gently from the outside world. They are also a closed design – the rears of the diaphragms which vibrate to produce the sound aren’t vented to the outside world, but are contained in sealed enclosures.

None of that is to say that the headphones are ugly. Indeed, I think them quite handsome. I reviewed the black models, but beige ones are also available. They come with a semi-rigid carry case.

Performance-wise, they employ 40mm dome shaped drivers with neodymium magnets and a frequency response rated from 4 to 40,000 hertz. They have built in amplifiers – power output not stated – since this is required for both the noise cancelling and Bluetooth functions.

The Bluetooth function has the rare feature of supporting all the audio codecs, plus one of its own. The compulsory, lowest quality, SBC is covered of course. As are the two higher quality ones: AAC (favoured by Apple products) and aptX (preferred by higher end Android devices). And then there’s Sony’s own LDAC codec, which offers even higher audio bitrates – approaching one megabit per second, or more than 85% of the rate of an uncompressed CD. But for that you’ll need one of Sony’s higher end Android phones or its quality audio players.

They are rated to run for twenty hours with noise cancelling on, and two hours longer with it switched off, and a charge time of around four hours is required. Charging is via a MicroUSB socket. The cable is provided, the power adaptor isn’t. Clearly not a lot of power is required for charging, so any old computer port will do the trick.

Should you run out of power, the headphones work anyway as normal passive ones, albeit at lower sensitivity (98dB/mW versus 103dB/mW) and lower impedance (14 vs 46 ohms). Of course you need to use the headphone signal cable, in this case, rather than Bluetooth.

But you might want to use the cable anyway when possible. You’re not going to get high resolution performance from these headphones using a Bluetooth connection, even with Sony’s LDAC codec (if you have a device that supports it). If you do want to take some advantage of the ability of the headphones to reproduce frequencies up to 40,000 hertz, you need a wired connection to a high resolution source device.

And, also, there’s flying. You still aren’t supposed to use Bluetooth (it’s a transmitter, after all) during at least take off and landing on commercial flights. But plug in (a two-plug adaptor is provided in case you’re on an aircraft with an old entertainment system) and you can take advantage of the noise reduction for a much more restful flight, all the way from ground to ground.

Just in case you aren’t familiar with noise cancelling headphones, the process is conceptually simple, although the development involved must be daunting. Even with over-ear headphones, some noise from the world leaks through to your ears. Noise cancelling headphones use microphones in each earpiece to capture the sound striking the headphones. They then process this signal so that it replicates the sound that leaks through the headsets. Final step: the signal is inverted and fed into the music of whatever you’re listening to at just the same level as the leaking sound. But since the waveform is upside down compared to the environmental sounds leaking in, the two just cancel each other out, leaving nothing but the music you truly wish to hear.

But getting that signal processed correctly and matching the levels perfectly is not an easy thing to do. No system does it perfectly, and none can reverse really deep bass noise.

So how did it work with these headphones? Extremely well. Sony doesn’t specify the amount of noise reduction, but it seems at least as good as any I’ve experienced, and they’ve routinely claimed 30dB or more of reduction in the midrange frequencies.

Sure, you can still hear stuff outside if no music’s playing, and even if music is playing if the noise is loud enough. But in general, the noise is reduced to a matter of no consequence, leaving one free to enjoy just the music.

And the Sony MDR-1000X headphones did a very nice job of delivering the music. There was plenty of volume and a very well balanced tonal quality, with excellent control of the upper midrange and treble to deliver a silky smooth, classic sound quality. Some female vocal sibilants which can be bothersome were quite tamed with these headphones, yet plenty of detail was retained, including in the upper frequencies. The bass, also, was powerful and extended.

Something I noticed spoke of the quality of the actual drivers. There can be a temptation with noise reducing headphones to use cheaper, lower quality drivers. After all, the maker is also building the amplifiers in them, and a digital signal processor to do the noise reduction, so why not do a bit of EQ at the same time, correcting for driver deficiencies?

But it was very hard to distinguish between the sound quality of the headphones with the power on and the power off, suggesting that there’s very little if any correction being performed in electronics. There was a slightly greater overall clarity with them on than off, but the effect was very subtle. The only marked difference was the position of the volume control on the source device. When they’re switched on, these headphones will go very loud with any source.

One potential issue with noise reducing headphones is wind noise. Since they depend on capturing environment sound, wind blowing across the face of a microphone could result in phase-inverted wind rumbling. So I sat outside for a few hours with the wind blowing in my face, across my face, and on the back of my head, listening to music with the noise reduction process engaged, and there was only once the slightest hint of wind rumble.

Volume and music control (only available via Bluetooth, not wired) is managed via the touch sensitive face of the right earpiece. Swipe up or down to change the volume. Swipe forwards or backwards to skip tracks either way. Double tap to pause. Repeat to play. All very clever.

A really useful convenience feature is their talk-through capability. By placing your ear up to the right hand earpiece, the music is muted. Just as importantly, the noise cancellation is switched off. Furthermore, the microphones normally used for gathering the sound of the outside world in order to cancel it are pressed into service to feed that sound into the headphones. When someone wants to talk to you, you put your hand up near your right ear and you can hear them clearly right through the headphones. Take your hand away and everything goes back to normal.

But you can also set the headphones to pass through external sounds all the time or for longer periods. Again, this uses the external microphone, and again the noise cancelling is stopped, but the music continues, and rather than external sounds just leaking through the headphones, they are captured by the microphones and fed into them so that you can hear them clearly. There are two modes for this: “Voice” for just the frequencies of humans speaking – perhaps for hearing announcements – and “Normal” for passing through all sounds.

The Bluetooth connectivity wasn’t as startlingly reliable as that of the Beats Solo 3 headphones I looked at before Christmas, but way better than earbud models. They could manage an outdoors line of sight range of well over twenty metres and seemed largely happy regardless of which pocket on my person I placed the paired iPod Nano. There was the very occasional drop out, extremely brief, as I was walking, suggesting the iPod Nano might have built up a static charge in my pocket.

That said, these are not headphones designed for exercise. The full covering of your ears and a portion of your head would soon result in excessive perspiration.

They do provide a reasonable grip, remaining firmly in place, while also being comfortable.

The Sony MCR-1000X headphones are expensive. Very expensive. But they also provide first class sound quality, Bluetooth convenience and a bunch of well designed usability features. You should have a listen to see if you like the sound.