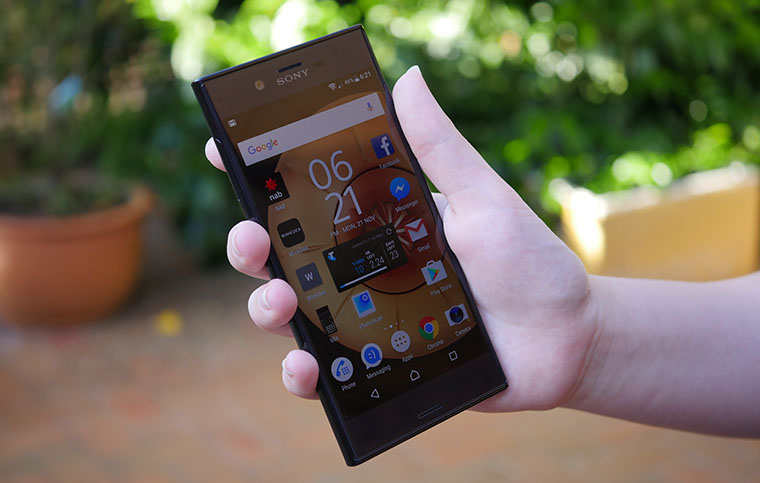 Kudos to Sony for its latest and best premium phone, the Sony Xperia XZ. It stands out. It actually looks different. I, for one, love it.

I love it because it is almost entirely featureless, style wise. There are no artful curves, apart from the edges which are curved enough so that you won’t be injured by sharp corners. There are no pseudo chrome highlights. It reminds me of the monolith in 2001: A Space Odyssey. It’s just a thin black slab (although, if you prefer, you can get it as a thin “Forest Blue” slab instead.)

That said, when I held it up to family members to say how much I liked the styling, most didn’t agree.

The back of the case is made of something called “ALKALEIDO” which, looking at Kobe Steel’s trademark application, appears to be sheet aluminium. Perhaps there’s more to it than that. The (black) colour looks smoothly anodised with a satin finish. It’s easily marked by fingerprints, but they wipe off as well.

The phone is 8.1mm thick – there is no camera bump – and 72mm wide and 146mm tall. The display is 5.2 inches with a full HD (1920 by 1080) resolution in 16:9 aspect ratio, so it tends to be a little taller by comparison to its width than most. There’s a headphone/microphone socket on the top, power key to the right with the volume rocker underneath that and a “camera” key even further down. Hold that for a second and the camera fires up. Press it again and you take a picture. That edge of the phone is so well populated with keys, it can be tricky to apply the clamp of a selfie stick without causing mayhem.

The home key is a “soft” key on the bottom of the display, along with the “apps” and “back” keys.

The power key has a fingerprint sensor. I had it memorise my usual right index finger and thumb, but then I got smart and also had it memorise my left middle finger. When I picked up the phone in my left hand, that finger fell naturally onto the power button. A little squeeze and a virtually instantaneous recognition made this the best phone I’ve used for unlocking from a secure screen.

The phone runs a Qualcomm Snapdragon 830 processor with 3GB of RAM and 32GB of built in storage. The SIM tray also accommodates a microSD card of up to 256GB capacity.
It incorporates LTE Cat 9 support for downloads of up to 450Mbps if, you know, hardly anyone’s using the cell tower, you’re not far away, the wind’s blowing the right way and the ancient gods have granted their blessings. Oddly, Sony doesn’t say much about the WiFi. I can attest to it supporting dual band and it seemed to work just as well as any other.

The Bluetooth connectivity comes with NFC. Google Cast is offered from the quick menu, while Miracast can be easily added to the quick menu. Both GPS and GLONASS satellite systems are used.

Sony seems very proud of the camera. The rear camera has 23 megapixels and “triple image sensing technology” which means, I think, the camera itself, the laser autofocus system and the RGBC-IR sensor which separately gathers data for white balance. It has predictive autofocus, intended to help you capture moving objects, and six tenths of a second start up to help you catch subjects before they run away. There are lots of manual settings if you like to play with such things, including manual focus and a shutter speed able to be as slow as one second. The camera is in the corner, so watch those wayward fingers. I’m speaking to myself there.

Of course, 4K video is supported. There’s optical image stabilisation. The specs speak of Sony’s award-winning 24mm G Lens, which had me scratching my head until I realised they were talking about 35mm camera equivalent focal length. That is quite a wide angle.

The front camera has a rather high 13 megapixels of resolution and is capable of low light operation thanks to an available ISO of up to 6400.

For some reason the review phone came sans-charger. No problem, I used another and it seemed to charge up quite quickly. I imagine it will work as well with Sony’s own.

It was a pleasure to use this phone. Everything worked as it should. Battery life was about the same as any other phone running Android 6 and the Snapdragon 820 processor. With very light use you can expect to go to bed with 70% of the battery remaining. With heavy use, have your charger or a power bank handy if you want to last the day. Physically it seemed to run fairly cool even when working quite hard.

There were no particular surprises in Sony’s version of Android. Anyone used to an Android phone will adapt within minutes, and not much longer if used to the iPhone.

The screen, being full HD rather than QuadHD, is obviously of lower resolution, but I defy anyone to notice that difference in any practical way. However, outdoors, even in the shade, it was not as clear and bright as the screen of the Samsung Galaxy S6 I use as my measuring stick. It was okay for dialling and so on, but when taking photos it was harder to get the framing right, and even harder to make manual adjustments on the screen.

Connectivity was reliable and at least as fast as any other phone. I even managed to use it as a workable WiFi access point in Canberra Airport, despite the terrible coverage therein by Telstra’s 4G network.

The phone supports OTG via USB – that is, On-The-Go – wherein you can plug other stuff into the phone’s USB Type-C port and have it work. I normally test OTG with a Micro-B USB cable, but I don’t have one yet for USB Type-C. What to do?

Ah, I have Comsol USB Type-C breakout box: it has Ethernet and three USB 3.0 ports. I got it for USB Type-C computers with limited connectivity. Plugged that in and it worked perfectly. In fact, I could have USB memory, a USB keyboard and a USB Audio Device all working at the same time. For fun I tried the Ethernet cable as well, but that wasn’t recognised. The only thing that could be usefully added would be display capabilities, but I guess that’s for a future model. For those interested in such things, the phone was perfectly happy (using appropriate software) streaming Direct Stream Digital audio natively to an external DAC. The supplied Music app was a pain to get going because it asked obscure questions about screen overlays and permissions beyond those to which Android users are normally subjected. But once it was working, it also could play high resolution music, including Direct Stream Digital (although it converts this to PCM).

Also of note: the phone supports Sony’s LDAC codec for use with Bluetooth speakers. This provides higher quality, says, Sony, than the other audio codecs, but to take advantage of it you will need a Sony speaker which also supports LDAC.

According to the Quadrant Phone performance app, it scored above 42,000 (this is an index for comparison only, the numbers have no inherent meaning) compared to slightly under 30,000 for the Samsung Galaxy S6. So speed isn’t going to be a problem.

The camera worked rather nicely. It was easily controllable. You aren’t stuck with those 23 megapixels if you think there are too many (the photos in that resolution were around 8.5 to 10 megabytes in size). The native aspect ratio is 4:3, but there’s a 20MP 16:9 mode, plus 8MP modes in both aspects.

The wide angle lens does tend to pull in a wider view than many mobile cameras. The subjects of photos were beautifully captured, delivered with excellent sharpness and clarity, and smooth and delicate tonal graduations. When closely examining areas out of focus or towards the extreme edges, there was a tendency for increased picture noise and sometimes a bit of JPEG compression noise, suggesting that not much noise reduction is used. In general, that’s something I approve of. There was no RAW mode, though, so you’re kind of stuck with that JPEG noise.

Sony tossed in a protective case which I very nearly completely ignored, but something caught my eye in the paperwork. The case was the Style Cover Touch. Touch? Yes, it turns out that the this is a cover-type case, with the front flap hinged at the left, while the stylish matt-and-gloss rear grips the phone. And the front flap is transparent, with a slightly textured look. So you can see the screen, and you can touch right through it even though it’s most of a millimetre thick. Furthermore, the phone detects its presence and switches the screen on automatically when you open the flap.

Nice case. Useful. Its only downside is that it adds to the phone’s thickness, as all cases do.

The Sony Xperia XZ is a fitting premium phone from this brand, fun and effective to use and with USB Type-C, looking somewhat towards the future. Do check it out.