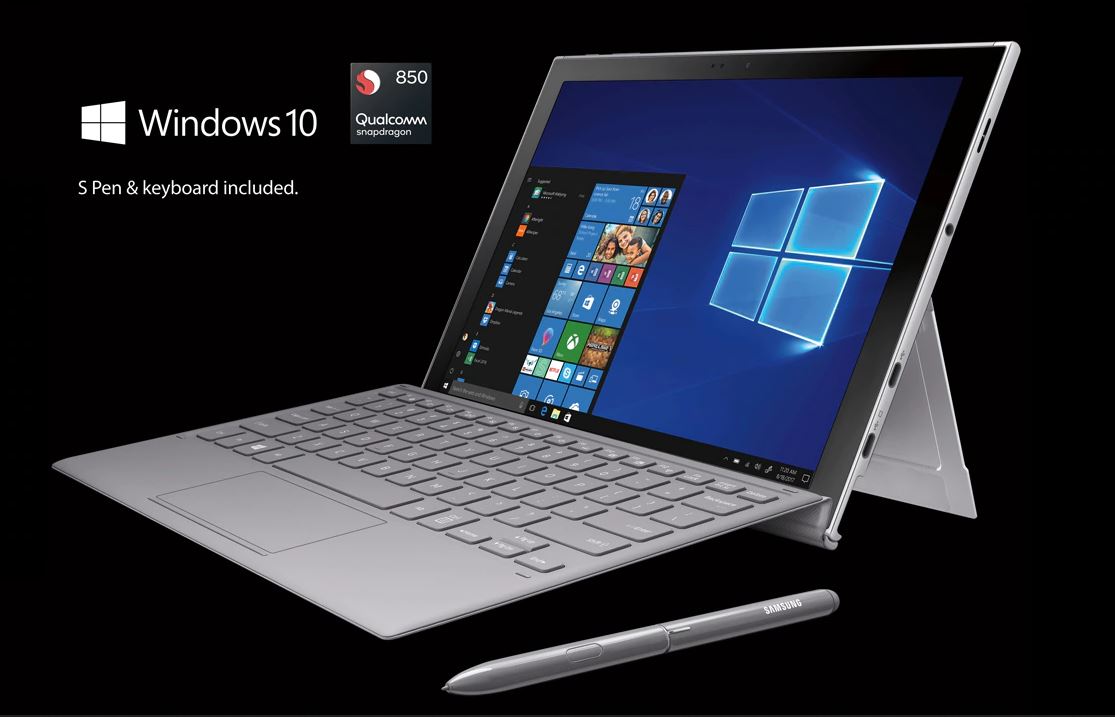 Samsung Galaxy Book2 – Windows and 4G on the move

The Samsung Galaxy Book2 is for those that want a Windows Experience on the move. It uses the Qualcomm SD850 Mobile Compute Platform for Windows on ARM (WoA).

Before we review the Samsung Galaxy Book2, we need to look at how WoA works.

First, you may see it called Windows on Snapdragon (WoS) – it is the same. WoA is not so much a bold move away from ‘powerhouse’ Intel x86 chips but an endeavour to run Windows in an x86 ‘emulation’ on an ARM-based, mobile chipset.

Then through magic (called WOW64) that runs efficiently on the Qualcomm SD850 SoC, it presents a simulated Windows environment that runs most 32-bit Windows programs on the alien 64-bit processor – think of WOW64 as a universal translator.

We say most apps run on WoA. We encountered several that did not. For example, Microsoft’s own Windows app builder Visual Studio will not run. Some monolithic programs need more memory and horsepower. And don’t try 64-bit AutoCAD, Adobe Photoshop Elements or most database/statistical programs that need a co-processor. Don’t even think of running older apps pre-Windows 8.

Why bother with WoA?

It comes down to a use case. Portability, huge battery life, LTE connectivity, and uses mobile phone technology to make a lower cost device.

The result is an always-connected device that is more like a big mobile phone with all the advantages of Windows desktop – mouse, keyboard, stylus, USB-C, multitasking, runs an external monitor, and a large 12-inch, 2160 x 1440, Super AMOLED touch screen. Simply put, you can do almost everything on this device that you can’t do on an Android or iOS tablet.

On the USB-C front, don’t try to connect older devices that need separate drivers installed. Generally, if a device runs on Windows 10, it should work in W0A.

And what is with Windows 10 S?

The Samsung Galaxy Book2 ships with Windows 10 S – just like the Surface Laptop and Go. In essence, it is a pared-down version that only installs apps from Windows Store (for security) and gives maximum battery life.

I can’t live with it as many of my testing apps are not in Windows Store, but it has an easy, free, one-way change to full-fat Windows 10 – you can’t easily go back.

I did not see any downside in changing, but all my tests were in full Windows mode, so I have no comparison.

I have to admit to owning its predecessor, the Intel x86, Core i5, Samsung Galaxy Book 12 (2017 review here and its Galaxy Book predecessor as well). Both are still going strong and in daily use. My only lament is the lack of a kickstand – well Samsung came through.

It looks like a more refined Microsoft Surface Pro replete with a Surface-like kickstand, keyboard and S Pen. Unlike the Surface, it has two USB-C 3.1 10Gbps ports that make it ultimately more usable.

The tablet is solid, very well made, weighs 800g, and you can add the keyboard for a total of 1.1kg. And best of all, it comes with the much-needed infinitely adjustable kickstand and with everything you need except a USB-C dongle! Microsoft, please take note – it is rude to ask for squillions of dollars more for the keyboard and pen!

Setup is typical Windows, so we won’t go there except to say that after install we went straight to the Windows Store for a free upgrade to full-fat Windows 10. Then we recommend you download and run ShutUp10 – the privacy tool that should have come with Windows.

We have read a few reviews that sledge WoA performance, so before you read further, we can assure you that this device performs flawlessly within the well-advertised use cases – Office productivity tools, content consumption, web browsing and as a 4G-enabled travel companion.

We found that opening more than a few tabs in MS Edge or Firefox did slow down scrolling. Basic photo editing was slower than we experience on an Intel x86. You don’t use a four-cylinder car to tow a caravan!

The bezels are larger than I expected – Samsung’s Android phones and tablets are almost all screen. Still, it has to house a camera in the top bezel, side-firing AKG tuned speakers in the side bezels and the fold-up keyboard flap at the bottom.

It has 350 nits and infinite contrast. It’s fine for daylight use. Claimed colour gamut is 200% sRGB (Surface Pro 6 is 136%) and Delta-E is .31 (0 is perfect). Unfortunately, our suite of test software and hardware was largely unusable, not recognising WoA, so we could not verify colour gamut, accuracy or nits.

All we can repeat is WOW – Super AMOLED is superb and better than anything else I have seen.

Qualcomm SD850 mobile compute platform is its second generation. Qualcomm claim it is 30% faster, has 20% more battery life and 20% faster LTE than its first attempt – the SD 835. I have not tested a WoA on that Soc.

Qualcomm says it is close to an Intel Core i5-7y54 (Y series are low power), which is true for native 64-bit apps. Unfortunately, there is an overhead in running WOW64.

Being fanless, we expected heat – it reached 38° under full load, but most of the time was around 30°. CPU throttling was evident, falling to about 60% speed after 5 minutes under full load.

My observation is that it takes around twice as long as an i5 Surface Pro for most complex tasks.

You can get a 4G/4GX Telstra pre-or-post-paid plan (these have all changed – see here) that gives maximum available (uncapped) upload and download LTE speeds. You can use a Telstra 3/4G MVNO like Boost, Aldi or Woolworths but data speeds max at 100Mbps and can fall back to 3G.

We purchased a Telstra pre-paid mobile data only sim for the two-week test. We went from Central Coast to Sydney to Canberra and then back via the Southern Highlands.

Typical SpeedTest results varied from 40-70Mbps download and 30-40Mbps upload. Later in Sydney, we got 70/50Mbps.

Purely subjectively, there were many places we could not get a signal yet could get one on a Samsung Galaxy Note9 or S10+. Unfortunately, we could not get our LTE Cell Information app to work under WoA.

The LTE modem also has GPS/Glonass, and it was perfect for a large-screen GPS while travelling. You must download the appropriate Australian maps free from Microsoft Store to use it as a navigation device.

And as a bonus, Windows manages a seamless automatic switch between Wi-Fi and LTE, so you won’t burn mobile data.

It has Wi-Fi AC, dual-band, 2×2 MIMO and supports VHT80 routers for speeds up to 866Gbps. We were able to achieve 866Mbps up to 7 metres from our reference D-Link router on our tests.

It has Wi-Di (Miracast) for screen mirroring. BT is 5.0 and offers increased distance and up to 2Mbps throughput. There is no NFC.

8MP rear (f-stop unknown) with autofocus will do 4K@30fps video. It has no HDR or flash.
5MP front (ditto) will do 720@30fps video. It has a rear fingerprint sensor – no Windows Hello IR camera. The cameras are fit for purpose and take excellent social media standard daylight shots.

2 x USB-C 3.1 both accept data and charging. The bottom port has ALT DP 10Gbps connectivity for an external dock or monitor.

We tried it with a Kensington SD2000P USB-C 5Gbps 4K dock with 110W USB-PD, and a Kensington SD4500 USB-C 5Gbps Dual 4K – both worked perfectly with a single external monitor. Also, we tried it with a range of pass-through power dongles (USB-A, HDMI, Ethernet etc.) and they worked perfectly with up to a 4K@30Hz monitor. The Adreno 630 GPU only supports a single 4K over HDMI/DP.

It has 2 x 2W Dual side-firing AKG tuned speakers were in a word – flat!!! It was not so much about distortion but a total lack of bass, mainly mids and little highs. Fine for Skype but nowhere near music or movie levels. Maximum volume was 80dB – enough for a small room.

Dolby Atmos is for headphones using 3.5mm audio and BT. It is superb with the right cans!

And no fans means no fan noise.

S Pen offers one of the simplest and best Windows Ink experiences – a 4096-pressure pen that does not need batteries. It draws power from the screen (Wireless Charging) and supports gesture (Air View/Command or hover) and drawing. It has a 2B tip size (.7mm), and it is a nice, responsive tool to use. Palm rejection is good.

A circular menu called Samsung “Air Command” appears on the right side of the screen. There you can choose to create or open a document in Notes, an app that lets you take handwritten notes or draw pictures. You can crop a part of the screen and edit it (or convert images to text) with Smart Select or you can capture the entire screen mark it up in Screen Write.

The rubber coated, backlit (on/off) keyboard has full sized 15mm chiclet keys with a 1.6mm throw and 70g actuation. It’s not the best for a touch typist, but it is quite usable. There can be a bit of flex with the keyboard angled up, but it is better than a ‘dead-feel’ when the keyboard is flat on the table.

The trackpad supports four finger mode is smooth and responsive covering about 80% of the diagonal screen in one swipe.

I could make similar comments about the Surface Pro keyboard. Both are for travel – not productivity, and I use a BT keyboard and mouse for productivity.

In the car, we only had a typical USB-A 5V/500mA outlet, and it struggled to keep up with GPS use – neither adding to nor subtracting from the battery. If you intend to use it in a car get a Belkin USB-C BOOST↑CHARGE with Quick Charge 4+ ($59.95) and it will provide up to 27W (9V/3A).

Due to time, we did not explore this feature fully – we would have liked to as it has seamless handover (content from the phone to Windows), screen share, unlock with the phone, notification sync, hotspot sharing and more.

This is one app that is likely to grow, given Microsoft’s intention for Windows to eventually support Android apps.

We could be picky and criticise things like some app compatibility, CPU throttling, 4GB RAM, slow storage speeds, average LTE performance etc – but that is not what the Samsung Galaxy Book2 is about.

Sure, the Qualcomm SD850 does not compete with an Intel Core i5 – if that is what you need, it is back to the Surface Pro 7 or HP Spectre.

The Samsung Galaxy Book2 offers a great Windows experience on ARM (mobile) architecture and does it very well. If you stick to office productivity, web browsing and content consumption, you will be ecstatic and never reach the limitations of this phone – err tablet.

I travel a lot and am now not sure if I can live without it although the Microsoft Surface Go (which I own and has  USB-C and a 10-inch screen) is a definite contender.

We are going to rate it on the assumption that buyers are aware of the limitations of WoA and want a perfect, always connected, travel companion.

Samsung Galaxy Book2
The Samsung Galaxy Book2 is about a new direction for Windows on ARM. It is perfect if you know its limitations.
Features
9
Value for money
8
Performance
7
Ease of Use
10
Design
10
Positives
Thin and light - now with a Surface-like kickstand and detachable keyboard
Amazing AMOLED, 3:2 ratio, for productivity and fantasic content consumption
Samsung build and quality
Always connected - LTE/Wi-Fi auto connection
Keyboard and S Pen included (take note MiserSoft)
Negatives
It's not a powerhouse PC – nor should you expect it to be
Slows down under loads – multitasking, graphics and games
S Pen magnet is weak - falls off too easily
8.8