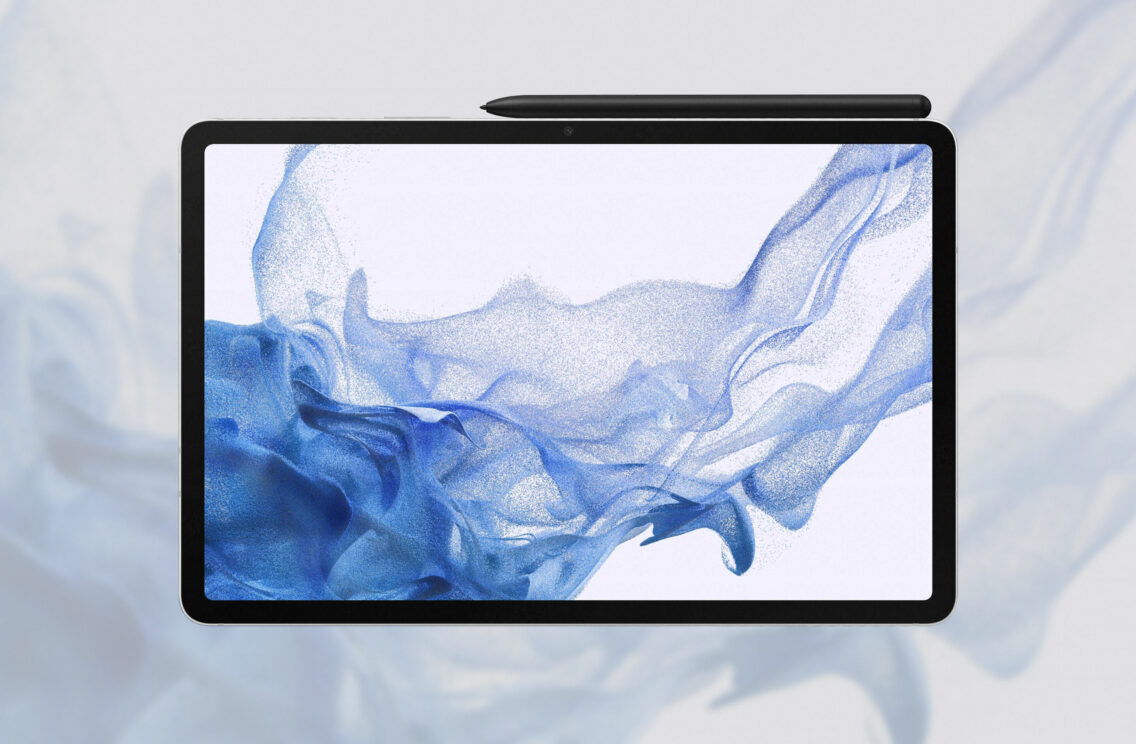 Android fans have had it rough when it comes to tablets. Apple’s iPads have all but taken over the market on the heels of years of neglect by Google and most app developers.

However, with pandemic-led demand fuelling the segment to a five year high, tablets are seeing renewed interest by Android manufacturers, culminating in the release of the Tab S8 lineup by Samsung.

There are three different screen sizes to choose from ranging from 11 to a monstrous 14.6 inches. And with the fastest mobile processors from Qualcomm as well as 5G support, the Tab S8 lineup is taking aim squarely at Apple’s iPad Pro with prices to match.

After spending two weeks with the 12.4-inch S8+, it’s clear that Samsung isn’t messing around.

If you’ve used a Tab S7, the S8+ will feel familiar. It’s thinner and lighter than a 12.9-inch iPad Pro and the bezels are narrow all the way around. There’s no camera notch either, offering just enough room to comfortably hold the tablet without touching the screen. The back of the Tab S8+ has dual rear-facing cameras and a magnetic strip to hold the S Pen, which is included in the box.

The Tab S8+ has a quad speaker arrangement. This sounds better than most laptops with audio that is nice and loud, without any distortion, although they don’t sound quite as full as the 12.9-inch iPad Pro. The position of the power button is still too close to the volume buttons and I often found myself pressing the power button by mistake.

There’s no headphone jack, which is a bizarre omission when you consider that most ‘pro’ tablets have one. You do, however, get a microSD card slot to store not just files but most apps as well. This means you can save some cash and spring for the base 128GB model and throw in a 1TB microSD card to expand the internal storage later.

In terms of biometrics, you have a speedy but less secure 2D-based face unlock system and an in-screen fingerprint scanner – both of which worked well in testing.

The Tab S8+ supports fast charging at up to 45 watts but sadly there’s no charging brick included in the box.

The 12.4-inch OLED display boasts a razor sharp resolution of 1848 x 2960 and refreshes at a buttery smooth 120Hz. It’s worth noting that the refresh rate isn’t adaptive, so setting it to 120Hz means it will always run at that refresh rate regardless of the content on screen resulting in a greater hit to the battery (more on that later).

It’s also a very glossy screen, picking up reflections and glare very easily, which can make outdoor use during the day challenging.

While it isn’t anywhere near as bright as the OLED panels found on Samsung’s smartphones or the mini-LED panel found on the 12.9-inch iPad Pro, the inky blacks and infinite contrast makes watching content a pleasure.

My main issue with theTab S8+ is that the 16:10 aspect ratio isn’t a great shape since Android apps tend to prefer vertical space versus horizontal space. This means that apps are flanked by wasted empty space on the sides, with not enough vertical information. The net result is you end up scrolling a lot. Similarly, stacking apps side by side in a split screen configuration feels too cramped. Having a taller 4:3 or 3:2 display such as the ones found on the iPad Pro and Surface Pro would’ve made the display a lot more usable.

One benefit of using a narrower display is that holding the device like a regular tablet in portrait mode is more comfortable. Coupled with the unit’s light weight, this makes it easy for quick two thumb typing.

Together with Wacom, Samsung has been refining the S Pen experience ever since it introduced the original Galaxy Note all the way back in 2011. Samsung is so confident in the S Pen’s utility that the company now includes it with its flagship Galaxy S22 Ultra and Tab slates.

The decade plus worth of optimisation shows both on the software and hardware front with a level of features, functionality and customisation that simply blows away the competition.

The stylus included with the Tab S8+ is the S Pen Pro which drops the latency down to just 2.8ms, bringing it in line with the Galaxy Z Fold 3 and S22 Ultra. The result is that, unless you’re drawing a straight line really fast across the screen, you won’t see a gap as the line tries to catch up with the pen tip.

My Tab S8+ review unit was missing the included S Pen, but I was able to use the S22 Ultra’s smaller S Pen on the tablet just fine. I have also been using the S Pen ‘Fold Edition’ from my Galaxy Z Fold 3, which is closer in size to the S Pen that comes included with the Tab S8+, and the performance felt identical.

The ultra responsiveness of the S Pen coupled with the soft rubber tip makes it feel closer to writing on paper than the hard tip of the Apple Pencil and Microsoft’s Surface Pen. The S Pen will even give you audible pen to paper feedback as you write and draw. Whether it’s the ability to write a quick note while the screen is off or unlocking the screen with your S Pen, you can pretty much do everything without ever laying a finger on the screen. Mercifully, the S Pen now supports writing directly in text fields without bringing up the on-screen keyboard first.

Even if you’re not a habitual note taker or a budding artist, Samsung gives you plenty of reasons to unholster the S Pen. For example, ‘air view’ essentially turns the S Pen into a mouse by displaying additional pieces of information as you hover over parts of an app or browser window. You can also use the S Pen as a remote for controlling the camera, music or PowerPoint presentations or just assign the button on the S Pen to launch whatever application you prefer.

You can even use the S Pen on your Windows machine, thanks to Samsung’s second screen feature that extends your Windows desktop to your tablet. While the wireless connection introduces a bit more lag, I could see this being a viable alternative to a dedicated Wacom tablet for artists. Plus, it gives you access to the plethora of professional drawing and design apps on Windows that are otherwise lacking on Android.

Samsung’s One UI and DeX

Similarly, Samsung’s DeX mode goes a long way in making up for Android’s shortfalls as a tablet OS. With a tap of a button, you’re greeted with a familiar desktop-like interface, complete with resizable windows, drag and drop functionality, and mouse and keyboard support. If you’re using one of Samsung’s expensive keyboard covers with the built in touchpad, then you’ll want to switch to DeX.

Meanwhile, Samsung’s powerful split-screen functionality built into OneUI makes Android on tablets surprisingly usable, but the lack of optimised apps is where the experience falls over. There have been times where I really got into the flow of using an Android tablet, split screening apps, sharing files, and marking up documents only to open an app that just works in portrait orientation.

It’s a shame because, as a tablet OS, it’s more capable than Apple’s iPadOS, particularly when it comes to sharing files, external monitor support and multitasking. It now needs Google and app developers to acknowledge that tablets are an important part of the Android ecosystem.

Far from an endurance champ

The battery life will vary wildly depending on your use case. In my video rundown test where I streamed video at 50 percent screen brightness, the Tab S8+ clocked in a little over 9 hours. However, in regular day-to-day use where I would be multitasking between web browsing, emails, using some drawing apps and playing some games, I typically got closer to 6.30 hours. In contrast, on my 12.9-inch iPad Pro I get 10 hours of video streaming and at least 8 hours on more mixed use cases.

Samsung put the front camera on its Tab S8+ on the long edge, just like a laptop, a move which started on the Tab S7.  This means when it’s docked in its keyboard case, it’ll make video calls that don’t look off-centre like they do on the iPad.

Apple strangely continues to place its Facetime cameras on the shorter edge of the iPads, as if we’re all making video calls holding them upright in portrait mode like iPhones. Thank you Samsung for realising that no one in their right mind does this and positioning the camera accordingly.

The 12MP front facing camera is surprisingly good for video calls, shooting at 4K and handling varying lighting conditions. It also supports auto framing where the camera will pan to keep you in the frame as you move about on a video call. It works but it isn’t as responsive or as smooth as Apple’s ‘Centre Stage’ implementation.

Around back there are 12MP wide angle and 6MP ultra wide cameras, which are nothing exceptional. In bright light, images are sufficiently sharp and colourful but the images get noisy quickly once conditions get dimmer.

$1500 is a lot of money to spend on a tablet, particularly an Android one where the user interface and app library remain largely unoptimised to take full advantage of the larger screen size. Since no one in their right mind would be looking at spending that sort of money for a device to just play Netflix on, you have to factor in the additional $359 for the keyboard and trackpad cover accessory.

The combination of Samsung’s OneUI and DeX makes the Tab S8+ workable both as a tablet and in laptop mode, while the included S Pen is more sophisticated than anything you’ll find on the market.

However, at close to $2000, there are other more capable alternatives to consider such as Apple’s iPad Pro or Microsoft’s Surface Pro 8, where the taller 4:3 display alone will boost productivity and multitasking.

That said, if you’ve been waiting for a high end multipurpose Android tablet or are an artist looking for the best pen experience, then the Tab S8+ should be at the top of your list.

Samsung Galaxy Tab S8+
The Samsung Galaxy Tab S8+ is a unique offering with a high quality OLED display and great pen experience. But its quirks and high cost mean there may be better alternatives.
Features
9
Value for money
6.3
Performance
8
Ease of use
8.2
Design
8
Positives
Thinnest and lightest tablet in its class
12.4-inch OLED display is fast and beautiful
Samsung's One UI and DeX interface makes tablet and laptop use workable
Offers the best stylus experience on a tablet to date
S Pen included in the box
4K front facing camera looks great on video calls
Negatives
Lacks a taller 4:3 or 3:2 display
Lack of tablet optimised Android apps
No headphone jack
Expensive
The keyboard cover is an essential but exorbitantly priced extra
No charger included in the box
7.9