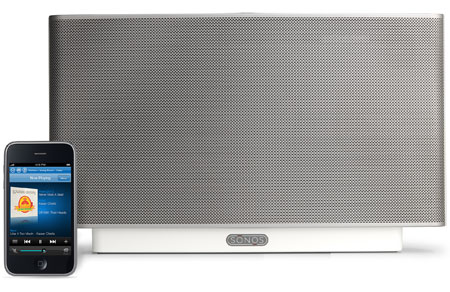 The Sonos ZonePlayer S5 is a multi-room digital music solution that can operate wirelessly – almost – and be operated remotely, thanks to several smart control options. Essentially streaming device, the ZonePlayer S5 doesn’t ‘play’ music itself, but rather retrieves it – plus podcasts and internet radio stations – from any device (PC, iPod or NAS drive, for instance) on your home broadband network – and broadcasts it via five inbuilt speakers.

A basic Sonos setup requires a broadband connection, a router and a ZonePlayer S5 to connect to – and play – your digital music library. An Ethernet cable between the router and the S5 is all you need to get started in a single-zone setup such as this, but if you want music in more rooms, you’ll need to connect a Zone Bridge ($179) to your router to enable wireless streaming to S5 ZonePlayers in each additional room.

Sonos says the system will support up to 15 ZonePlayers, allowing you to play the same song in every room at the same time, or play different songs in different rooms simultaneously. (Sonos offers two other ZonePlayer models, but these don’t integrate speakers so are best if you already have speakers to pair them with.)

To control music in each zone, there’s the Sonos Controller 200 ($699) and dock, or the supplied Sonos Desktop Controller software that you load onto your PC. If you already have an iPhone or iPod Touch, a free application download from iTunes gives you all the same functionality of the Controller 200, and saves you a bundle.

Quick start-up instructions are staring right up at you as you open the box, nestled in an indentation in the polystyrene packaging. This is great thinking and a wonderful start. Lifting it from its box, the S5 ZonePlayer unit is a single, white block with good heft. It’s slightly plasticky to the touch, but overall feels reassuringly weighty and solid. There’s a nice handhold to the rear, making the unit eminently portable, but no control interface other than top-mounted volume buttons.

Declaring its colours from the outset, number one instruction on the quick setup guide is to connect the ribbon Ethernet cable from your router to the main speaker unit. Then it’s over to the PC to install the Sonos Desktop controller software. If you live in a palatial dwelling, make sure your PC and the ZonePlayer are reasonably close to each other, because the next step is to synch them together by pressing and releasing a couple of buttons within two minutes of being prompted. Should be fine unless you’re the Queen of England.

The last step is to set up your software library. This is far from idiot proof; you’re going to need to be reasonably familiar with networking services on your computer, and how to turn folder and media ‘sharing’ on for the stuff you want to access via the ZonePlayer. If you’re not, however, don’t be put off, because the Sonos software will attempt to give guidance, using the wizard and their website.

The Sonos S5 ZonePlayer system is built to retrieve your digital music from wherever your might have put it: from your iPhone, your desktop PC, Mac or laptop computer and, in fact, any other connected digital device you can think of. It’s compatible with every imaginable popular sound format and will link with virtually any digital music device you own. You can also stream music services like Audible, Last.fm and Rhapsody, as well as social networking services like Twitter.

Once you’ve chosen your libraries and services, play can be initiated via the Sonos Desktop Controller. You can choose which particular zone you’re influencing, adding a zone for each ZonePlayer you’ve bought, and whatever’s playing at that moment will be displayed visually, including cover art if you have it. On the technical front, the S5 is a five-driver speaker system, comprising two tweeters, two mid-range drivers and a 3.5-inch subwoofer, each powered by a separate digital amp. Frequency response and power output specifications for the system are not provided.

Once the units are set up, performance is instant and impressive. It’s simple to select tunes from your own music library, create your own Sonos Playlists, or go to the Radio tab to hear someone else jabber on. Testing the radio performance, a double click on one of the listed stations in the desktop software results in an instantaneous switch on the ZonePlayer. Switching between stored music is similarly quick, with only a brief cursor swirl before the new track kicks in. Anything played gets put in a new ‘queue’ list and so is easily revisited later, or you can manually build up a queue of your own in advance and save that queue as a new playlist.

In terms of operation, the ZonePlayer S5 is easily the best I’ve tested for some time. The interface is simple and intuitive and response is immediate but, better still, you can download a controller app for an iPhone or iPod Touch for free and get all the same controls without having to spring for the $699 dedicated Sonos Controller 200.

Sound quality is really good, but not amazing. It’s all a bit tinny in the mid range, although there’s very good bass; more so if you place the unit on the floor! The quality of your digital recordings is a factor, of course, but you can pump the volume to maximum without significant distortion and the sound admirably filled the large rooms we used.

Setup is very straightforward and the sound quality is extremely good considering the size of the unit and the source material. It’s a shame the S5 ZonePlayer doesn’t have wireless connectivity to the router out of the box, instead of having to buy a ZoneBridge but, in operation, the S5 couldn’t be easier to use, and the free Apple application adds considerable icing to the cake.

At $699 for the first ZonePlayer S5, another $699 for each additional player and $180 for a ZoneBridge relay unit, this is not a particularly cheap multi-room digital music system, sitting somewhere in the middle of the current crop, but if we had the money for three or more units, we’d be sold.