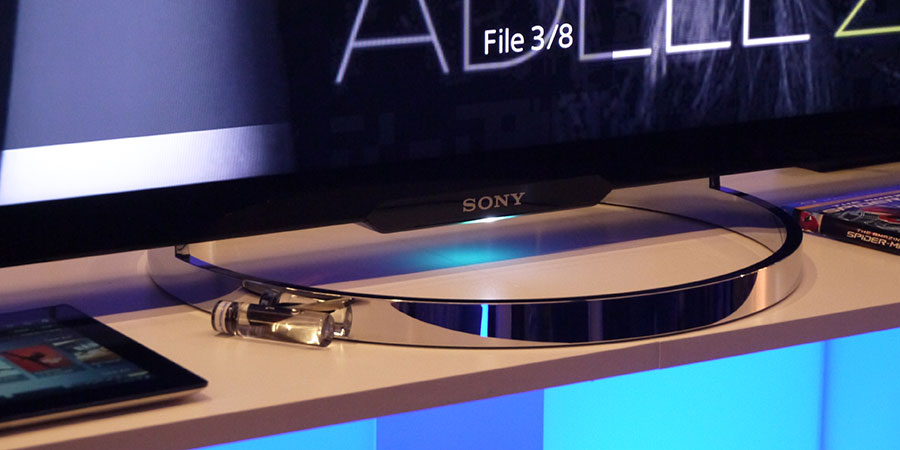 But then there’s the 4K announcement, with Sony taking its 84 inch Ultra High Definition TV from last year and making it ever so slightly more affordable, as well as easier to place in the average living room.

“Big” is a loose term, though, and when 47 inches is the average size nowadays for TV purchases, Sony’s reference to big means that the 4K TVs will be arriving in 55 and 65 inch models, alongside last year’s 84 inch model.

These new models (X9004A) will feature all the high end specs thrown into Sony’s other TVs, as well as a panel capable of outputting both 3840×2160 and 4096×2160, depending on the signal sent their way. MotionFlow is included, but you can switch it off if you like, while 3D is also there and will support SimulView, which allows two gamers to see two separate screens, though will need special glasses for this.

Also of note is the content, which is one of 4K’s biggest hurdles. While there isn’t a proper 4K streaming solution coming for Australia yet, Sony has announced that eight 4K titles will be available on Blu-ray and packed in with every Sony 4K TV sold this year, with the list including “Angels & Demons,” “The Amazing Spider-Man,” “Total Recall,” “Battle: Los Angeles,” and the classic “Ghostbusters.”

Hands on with the new screens and we have to say that we’re impressed. Compared alongside a competing display, the colour differences are very noticeable, and while both were vivid, the display test Sony presented revealed more natural colours rather than just intense colours.

We did think the Sony might have been over-sharpening, though that could be attributed to various settings used, and won’t know for sure until a GadgetGuy reviewer gets it and takes a good close look.

The speakers taking advantage of the magnetic fluid were impressive enough too, and while the Sony 4K TVs are thin, the sound quality coming out was anything but.

Bass could certainly do with more oomph, but overall sound was loud, distinct, and much better than the average speakers you see on a LCD TV, especially since they face you.

It’s also nice to see Sony has moved away from the monolithic design it had in earlier models, and this writer likes the simplicity of the stands more in these new models.

Pricing on the 4K UHDTV sets hasn’t been announced yet, but Sony is telling us to look for them in July, so look for them then, with prices likely above the $5K mark.