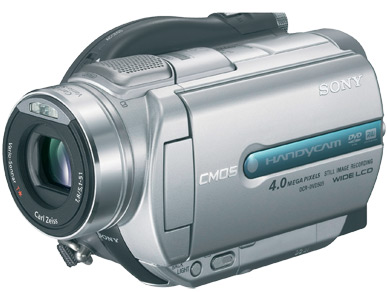 Sony’s DCR905 is the top of the new range of consumer DVD cameras released by Sony. Aimed at what Sony claims to be a rapidly expanding part of the market, it is targeted directly at those wanting a little bit more from their camera while sticking with the KISS (Keep It Simple, Stupid) approach to DVD cameras.

The 905 is a CMOS-based camera, with its 5.9 mm sensor being rated at 3 megapixel Primary Colour capability, supplying in effective terms, 1.91 mepapixel (4:3 aspect ratio) and 1.43 megapixel (16:9). This is the only CMOS camera in this range, with all others using CCDs for their sensors. Being CMOS-based assists the usable battery life of the 905.

The CMOS views the world through a Carl Zeiss Vario Sonnar T* lens system, which when the camera is powered down, is covered by an automatic leaf-type lens cover. The 905 records sound in Dolby 5.1, which plays back in stereo on the camera, but can take advantage of a full 5.1 system off-camera. The widescreen LCD is a major attraction, while some potential purchasers will be enthused by the 905’s ability to take still and video images at the same time.

A Sony specific hot-shoe enhances the basic unit and can accept a range of accessories including Sony’s new Bluetooth 5.1 surround mic.

While not a bulky unit, the 905 has a nice, substantial feel in the hand, with the primary controls coming comfortably under the thumb and index finger of the right hand. The main power switch requires a safety mini-button to be depressed in order to rotate it to the ‘power on’ position, but once there it toggles easily between still and video functions. The 905 weighs approximately 639 grams and measures around 145 x 90 x 60 mm.

Probably the most noticeable feature is the large 16:9 ratio 3.5 inch LCD which swings out from the side of the camera in the usual way, but due to its aspect ratio, really does look wide. By simply pressing a button on the LCD side of the camera body, the view is switchable between 16:9 and 4:3 recording modes reflected in both the LCD and viewfinder.

On the lower edge of the LCD frame is an additional Record/Pause control and two buttons controlling the zoom function. Other features include a Display/Battery Info button, the Easy Handycam select button (see below), the camera reset pinhole and the USB port. Below the lower edge of the closed LCD are the Back Light select button and, a convenient touch, the Play/Edit button. This last brings up thumbnails of the clips or still images already recorded which when touch-selected, open up the playback controls.

Still images can be saved either to the Memory Stick Duo Pro as 4 megapixels images when in still camera mode or 3 megapixels while video recording.

Adjacent to the Play/Edit button is an attached cover protecting the optional LANC remote control 2.5 mm jack, a Sony-specific AV plug for connecting to external devices for playback and the socket for power adaptor plug.

Like other Sony cameras, the menu system is touchscreen driven, with the categories and subcategories easily readable and intuitive. The LCD is bright and adjustable in colour, intensity and position and is better than many for viewing in bright outdoor light. While it is obvious the LCD is intended to be the primary means of sighting the camera, it is backed up by a non-extendable viewfinder with a focusing lever under the eyepiece. However, as a person who wears specs, has a big nose and is left eye dominant, I found this viewfinder as useful as lactiferous mammary protuberances on a male bovine.

Under the viewfinder at the rear is the covered slot for the Memory Stick Duo (+/- Pro), which is immediately above the battery. The primary record/pause button and the flash control button are alongside the card slot with the power button at the top of this rear control panel.

While the DVD side of the camera is largely featureless, on the top surface there is a bit more action. Coming forward from the rear, in front of the power button, is the still camera shutter release button and the zoom control is in front of that again. Closer to the front of the camera is the slide button for accessing the DVD compartment and this is near to the top mounted microphone.Ã‚Â Immediately behind the microphone is an attached cover that opens to reveal a hot-shoe for specific Sony accessories, such as a microphone, video light or additional flash. Immediately behind this is another slide switch for Night Shot selection.

There were no inputs for headphones or external microphones, which we consider a significant drawback for the serious videographers. The accompanying manual is extensive but is let down to a point by a limited alphabetical index at the back and lack of a cohesive series of labelled views of the camera in one central area of the booklet.

If you are familiar with videocameras at all, then using this camera in automatic mode would pose no challenge – but Sony wants to make it appear even easier yet again. By pressing a button, imaginatively labelled ‘Easy’ on the side of the camera covered by the folded LCD, you can select Easy Handycam setting which basically restricts the range of possible manual selections in the Menu.

It does this by deactivating most of the menu options, which made me think it was just another name for Automatic as opposed to Manual. I could not see any practical difference in operation between Easy Handycam on or off, other than with Easy Handycam turned off, you can run the camera in auto mode but still have quick access to menu functions if you have the need. This would not be a selling point to any other than an absolute newbie who could think it was an advance on the Automatic mode of other brands!

The camera balances nicely, and the controls require no conscious thought to use pretty much from the first encounter. The zoom rate is adjusted by the amount of movement of the zoom lever and, while a bit quick off the mark for my taste, it certainly was no problem. Using the LCD to frame, virtually every shot that I took was comfortable and the menu system made moving around the camera’s more advanced functions very easy. While as a general rule I am not a fan of touchscreen menus, Sony does do this well. It takes no time at all to scroll through the available options and fiddle with what ever parameter takes your fancy.

Not to put too fine a point on it, I hated the PicturePackage (PP) software with a passion. Firstly, it did not work as it was supposed to, telling me that I needed Flashplayer to be able to use the shortcuts in both the Desktop and system tray. This was unsolveable on my system, even though Flashplayer was installed. However I could get PP running from Start/Programs but it was probably more effort than it was worth.

There are two main parts to this software, DVD Viewer and DVD Producer. Strange to relate, it is in the Viewer that you get to use the limited editing abilities of the package after the video has been transferred to your hard drive. After browsing to the folder where the MPG files are kept, double clicking on one of the thumbnails then opens an enlarged viewing window where one of the buttons is ‘Edit’. Clicking this button takes you to the ImageMixer MPEG Cutter, which does what it says in a rather different way.

A series of eight images, relating to GOPs (Groups of Pictures), are displayed below the viewing window, with the largest duplicating the display in the main preview window. On clicking and dragging one of this group to the Start black rectangle and another to the End, you will notice that the Cut/Scissors icon highlights and clicking that trims the section between the two sections on MPEG. Another button will allow this edited file to be compiled as a separate file, retaining your original undamaged. In long edits, you can protect sections by first selecting the option that says ‘Protect Specified Range’.

When all this trimming is done to the point of satisfaction, it is DVD Producer’s turn. All the needed clips are now imported into the program after browsing to the folder where the clips are stored. From this point, the only choices available are to select clips you want in and have them linked together in one of three ‘styles’ that come with the software. These styles determine the type of transitions, music and theme that is imposed on your clips.

Finally, you can now burn your project to a DVD – oh, but only in the camera! In order to burn to a normal DVD, PP Producer has to do the authoring and burn to an 8 cm DVD in the camera, after which you can then import the Video_TS and Audio_TS folders into your favourite burning software and finally get to a ‘normal’ DVD.

If I owned this camera, I would use the software only to get the images onto the PC. (This is essential as it includes the driver for the camera disc, which is not recognised in My Computer as a separate disk) and then look elsewhere to put it all together.

The video, taken on automatic settings, was accurate in colour but lacking in contrast, making it look a bit ‘milky’ when shot under florescent light and a tad dull in good natural light. The interlacing effect was not noticeable on the 4:3 TV and the sound was unremarkable given that it was simple stereo playback. I cannot give an assessment of the 5.1 Dolby, other than to say why would you want it, let alone need it, if you are not going to edit the results properly?

The zoom worked nicely and the electronic Steadyshot seemed to be quite effective. Images taken with the Nightshot switched on were surprisingly good, albeit almost monochrome, but the Supernightshot was as expected, and that means not really worth using if any motion is to be recorded. Both Supernightshot and Colour Slow Shutter would be desperation measures only as both displayed severe movement artifact from the slow shutter speed and wide open aperture. The Smooth Slow Record function, basically a slow motion feature, would have some attraction in analysing golf and tennis swings, but is limited by its short duration and its confusing instructions. The fixed length three-second clip is expanded to 12 seconds in playback.