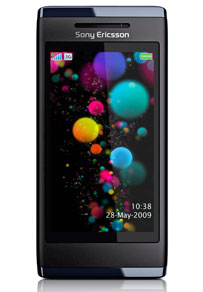 Sony Ericsson has had a hit-and-miss record with its most recent string of mobile handsets. Hits have come from the company’s excellent CyberShot cameraphones, misses have come from a bungled attempt to use Windows Mobile on a not-so-smartphone. Looking at the specs of the Aino: big camera, sexy design, media syncing, Sony Ericsson has put a lot of work into this device – but is it enough to avoid becoming another ‘miss’?

Sony Ericsson has made quite a bit of hype about the Aino’s media sync features, especially its ability to sync with Playstation 3 media content. In a nutshell, you can pop the Aino in a ‘dock’, and once configured correctly it will load up all your music, movies, and pictures wirelessly from your Playstation 3 or a PC loaded up with the included MediaGo program.

On the device you navigate through your content using the Aino’s touchscreen. Turn the Aino into landscape mode and instead of the usual menu screen you’re offered a colourful selection of music and movies and so on. A finger-tap on the music icon opens up a new menu listing your albums and songs, and a finger-tap on the track starts it playing.

The media interface is a slightly odd feature of the Aino. Why? It feels like you have two separate devices for different things – in portrait mode, the Aino feels exactly the same as any other mobile, using a numeric keypad and buttons to navigate menus, then in landscape, the Aino suddenly uses a touchscreen interface. The two separate navigational features are never integrated (so if you’re using the web browser, you’re using the keypad, if you’re using the media menu, it’s the touchscreen) so it feels like the media player was an afterthought, bolted on to a standard Sony Ericsson. The interface is workable, but feels like style over substance. (Oh, and it’s a media phone – without a built-in 3.5 mm headphone jack. You’re forced to use a Sony Ericsson 3.5 mm clip-on attachment.)

Another feature which uses the landscape touchscreen is the camera, which is a real winner. At 8.1 megapixel, the Aino is up there with some of the best camera phones in the market. The gorgeous, wide screen works beautifully as a viewfinder, the LED flash packs some punch, and a range of options like sports mode and twilight mode can be activated with finger taps on the screen.

In portrait mode, the device is the exact same Sony Ericsson interface as usual. And it’s looking old. The menus haven’t changed in years, and it’s a shame that such a modern and sexy design is encumbered by such a dated menu system. Many of the included features you’ll be familiar with – organiser/calendar, alarm clock, voice recorder, basic games etc.

The Aino comes with a web browser, which like the navigation software feels three years old. It works just fine for mobile-formatted websites, but it’s years behind the competition like the Apple iPhone or devices running Google Android. This browser should be used for emergencies only – full web pages are slow to load and poorly rendered all too frequently.

At $949 (RRP), the Aino has plenty of hot competition. As the device makes much of its media capabilities, it’s competing with the Apple iPhone 3GS and its native iTunes sync. Also, the Nokia 5800 Xpress Music offers a great music and media sync experience and comes with an unlimited-download subscription on Nokia’s music store. If you love the 8.1 megapixel camera, also look at the LG Viewty Smart or 8 megapixel Samsung Ultra Touch. But if you’re a Playstation 3 owner and just have to sync your media files – the Aino is the one to go for.

The Aino feels like it has a split personality. Design-wise it’s cutting edge and modern, but under the hood it’s three years old and clunky. In portrait mode it’s a replica of any other Sony Ericsson made since 2007, but in landscape it’s a brand new touchscreen media-savvy personal media player. Fans will love its long screen, great camera, and hot design, and the tech-savvy user may appreciate DLNA connectivity and Playstation 3 media sync. Naysayers will point to its lack of processing power and dated menus/navigation/web browser as a reason to look elsewhere.