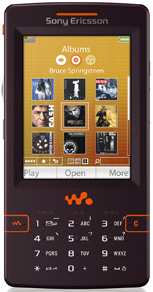 With most phones that are advertised as having MP3 playback support, the claimed support is usually tacked on as an afterthought, just a kind of extra application on the phone that has no special buttons, no real hardware support and poor music management. Mobile phones rarely rival dedicated MP3 players when it comes to music playback.

The Sony Ericsson Walkman series of phones are an exception. These phones are built from the ground up to support music playback – and it shows. The 950i, a 3G phone currently the top of this range, has plenty of memory (4GB), an excellent touchscreen interface, FM radio tuning, quality earbuds, Bluetooth headphone support, a hands-free kit with playback controls and dedicated play controls on the phone itself.

Running Symbian OS (used in many smart-phone models), the Sony is almost PDA-like in its other capabilities. The touchscreen supports handwriting recognition, it has email, web browsing, sound recording, Java application support and various small applications (like alarm, calculator, calendar and contact manager) built in. The phone can be used as a modem for 3G data services.

The large 240 x 320 screen is particularly bright, and the number pad is backlit for night use. It has no camera, which is a shame given its memory capacity (and really, for the price of the phone, you’d expect to get a camera).

Given the complexity of the phone’s many features, Sony Ericsson has done a very good job of keeping things as simple as possible. It uses the supplied stylus and touchscreen well – you can accomplish most tasks without ever using the side jog wheel or the keypad. Which is a good thing, because if this phone has a weakness, it’s the keypad. While handily backlit, the buttons are flush with the face of the phone rather than extruding – they’re not so much buttons are pressure zones corresponding to numbers. It makes quick texting and number dialling impossible unless you have the most nimble of fingers.

There’s not enough that can be said about the quality of the Sony Ericsson music interface. Like any good MP3 player, you can organise playlists, dynamically sort music by artist or album, arrange music by play frequency, set music to shuffle or repeat and perform some graphic equalisation. The W950i also has a rating system, where you can give the song a star rating (out of 5) as it’s played, and then organise your music by rating. It’s all very easy using the touchscreen and stylus.

You can listen to music while performing other tasks, like using the integrated organiser or note taker. Play controls on the front of the phone illuminate when music is playing, so you can always skip to the next song without changing contexts. The phone doesn’t come loaded down with a host of productivity applications (although it does support Java, so you could add them if you chose) – instead the focus in on media applications, especially music.

When it comes to music playback, the W950i is a powerhouse. It has all the audio features you’d expect from a dedicated MP3 player, and more. It incorporates voice recording, an FM radio and calendar and contact management. It has 4G of memory – enough for about 800 songs – and comes with quality accoutrements. The touchscreen and stylus make navigating the phone’s features fast and easy. In short, Sony Ericsson has got just about everything right with the W950i, with the glaring exception of a troublesome keypad.