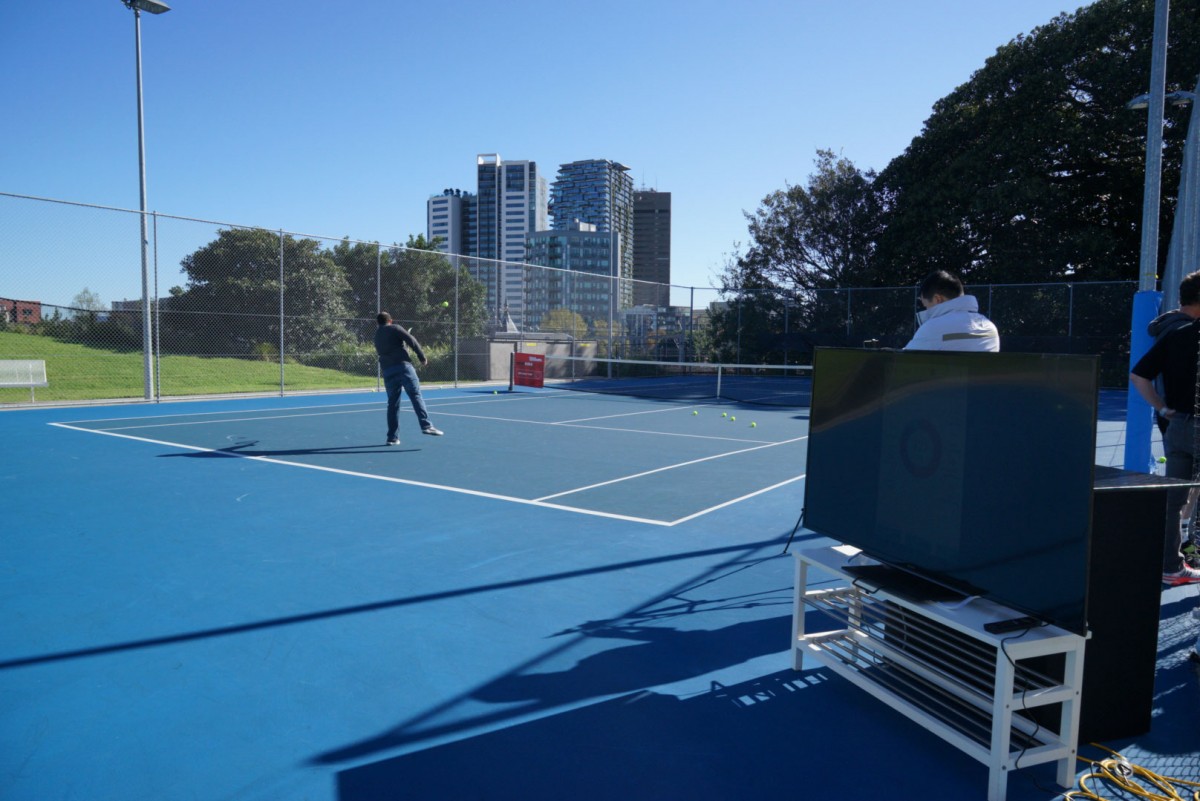 Sony eyes a better game with a smartphone tennis sensor

Fancy a game of tennis? If you’re always trying to work on your top spin and the coach doesn’t live with you, a new sensor from Sony could just do the trick.

Sports-fans and budding athletes, listen up, because Sony has a product that might be worth paying attention to if tennis is the game that brings a huge grin to your face.

It’s called the Sony Smart Tennis Sensor, and if the name doesn’t say enough for you, it’s essentially a small bit of plastic that you attach to the bottom of a racket that brings a few sensors and tracking mechanisms to your tennis game to help you improve.

According to Sony’s David King, it’s one of Sony’s new implementations of sports entertainment technology, which he says uses “technology to connect with sports of lifestyle activities to enhance experiences.”

“This is a real benefit to the end user, to the tennis player,” King told GadgetGuy this week. “We really do believe this is a game changer.”

That’s likely a literal statement, not just figurative, simply because this gadget has the potential to change your game if you’re already investing money in coaches, lessons, and so on and so on.

And it will do so with sound waves.

Yes, this is one of those unique little gadgets that makes its mark by taking advantage of sound waves, with Sony’s audio engineers coming up with the goods to make the Smart Tennis Sensor work.

Essentially, by using a combination of audio tracking and an accelerometer, the sensor can work out where on the racket the ball hit, recording the strike zone, ball spin, and speed of both the ball and the swing.

The sensor can do that by itself when used with or without a smartphone, plugging into a compatible tennis racket and tracking, but if you have either an Android or iOS smartphone, you can track the information.

In fact, if you set up the phone on a tripod or have someone hold the phone, you can also capture your movement using video, bringing in a slow motion element and stopping your tennis moves down to a tenth of a second to work out just how you’re swinging and hitting.

That’s something we tried this week, and while this journalist isn’t a tennis natural, or even a tennis artificial, found that the sensor added little to what we saw as the weight of the racket, with 8 grams sitting at the base.

The game of this journalist isn’t amazing — when asked if he played squash by the instructor, he politely returned with “he plays video games” — but even with his lack of skills, Sony’s sensor picked up on what he was doing, revealing the speed of his swing, and the few times his racket made contact with the ball.

With that in mind, someone who actually knows what they’re doing could end up using this to a good purpose, tracking speed and spin with ease, and even being able to look back at videos on the device later.

Interestingly, the results can also be shared socially, while the slow motion serves and hits can be turned into a “motion-shot” with a free application.

Android Wear owners can also tap into the sensor, tracking and marking successful actions from a watch. Granted, you need to have an Android Wear watch paired with the smartphone being used to make this happen, but if a coach or a parent if watching, essentially the person being tracked simply just has to say “here, have my watch” for someone to monitor the moves.

Apple Watch owners currently can’t apply, but we’re checking with Sony to find out when this will happen, because if the app is available for iOS, we suspect it’s only a matter of time before Sony builds one for Apple’s respective smartwatch.

As for tennis rackets, it’s unlikely anything you own right now will be compatible with the Sony Smart Tennis Sensor, because just like when Nike came out with its little accessory for shoes and iPods years ago, you need a specially designed version of the sporting good. In the case of tennis rackets, that means a recess at the base of the racket is needed.

That said, Sony has been working with four manufacturers for that already, sending word that Wilson, Head, Prince, and Yonex will all be releasing Smart Tennis Sensor compatible rackets shortly priced from $149 to $299.

These don’t come with the sensor, mind you, and Sony’s Smart Tennis Sensor attracts a $249 price tag by itself, which you’ll need if you want to track your game. Compatibility for phones runs across iPhone and Android, and provided you have Android 4.1 or higher, or iOS 6.1 or higher, you’re good to go, suggesting most phones sold within the last two years.

Battery life we’re told should be decent too, with up to 90 minutes of charge for use with a smartphone, up to three hours of life without a phone, with the device taking two hours to charge.

Now we just need to hit the ball more. That shouldn’t be too hard… right?