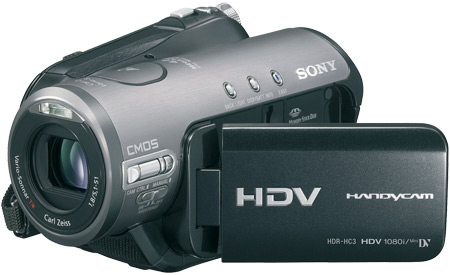 Sony has been releasing HDV camcorders hand over fist. The latest is the HDRHC3, and Mike Jones takes a long look at it.

Technology has a way of democratising itself; a process we see across the spectrum of tools, applications, devices and processes. What are high-end, exclusive, expensive, serious, professional tools today will invariably (generally sooner rather later) be in the hands of home consumers tomorrow. We see this technology trickle-down process nowhere more obviously than in video production. Just ten years ago, editing full-resolution digital video on a laptop was a sci-fi novel footnote, now it’s common practice in homes around the world.

The latest evidence of this technological trickle-down can be seen in the Sony HDRHC3 under review here, a camcorder that delivers high definition video (HD) into the hands of the everyday consumer. With dimensions comparable to some of the smallest palm-sized cameras on the market, the new HC3 is arguably the first true ultra-compact HDV consumer camcorder to put the visual splendor of HD into the hands of anyone. But with great promise comes great expectation; is the HDV format just for show on the HC3 or can it really pack the full punch of 1080 resolution?

If you’re going to be seen in public carrying around a videocamera you may as well have one that looks dead sexy! The HC3 is gorgeous, with its stylish shape and colour tones. Gone is the overly shiny silver plastic, or dull matte-black livery that is the camera world’s equivalent of computer box beige. Instead the HC3 is a tastefully designed gunmetal silver-grey with reflective black base. Moreover, the top half of the camera is brushed metal, a finish that helps the camera achieve the admirable trifecta of looking great, feeling good in the hand and greatly improving the camera’s robustness.

The HC3 shoots 1080i HDV format images but, like all of Sony’s current HDV models, can also, at the flick of a switch, revert to standard definition DV recording. This is a feature users may never actually need because footage shot in HD on the HC3 can be captured to your computer as SD, with automatic downconversion performed in the camera, on the fly. Moreover, HD footage can be viewed directly on a standard definition TV set.

The HC3 also has a number of output options to allow for direct HD output to a HD TV. A standard AV socket will give you composite signal to TV for SD viewing, whereas the inclusion of both component output and HDMI output delivers a HD signal directly to your (HDMI- or component-equipped) HDTV for viewing images direct from the camera tape.

As with all modern camcorders, the HC3 lives a double life, moonlighting as a very respectable digital still camera. The HC3 can capture digital stills to a Memory Stick Duo Pro card at up to 4 megapixels resolution. Moreover, the HC3 is capable of capturing such stills while simultaneously recording video.

The HC3 comes with an accessory hot-shoe mounted on the top of the camera body. A small removeable hood keeps the shoe free of dirt and maintains the sleek body design. The hot shoe allows for the connection of a variety of Sony-made accessories, such as small shotgun microphones and headlamps. Third-party accessories however are unlikely to fit.

There are two major omissions that dim the HC3’s appeal somewhat. There is no external microphone input (other than via the hot shoe for Sony accessories) and there is likewise no headphone socket. The former, alas, has become quite common on lower-cost consumer cameras. The absence of a headphone socket seems just silly. For anyone taking some degree of care with their video it is very often vital to ‘hear what the camera is hearing’. What your own ears hear and what is being picked up by the microphone can be very often two entirely different things.

Come on Sony, surely it’s not that hard, or represents that much extra expense, to include a headphone socket?

There are many things about modern camcorder design that are the legacy of the ‘that’s how its always been’ mentality, and in the HC3 Sony seem to have done away with some of these in favour of focusing on how contemporary owners will use the camera. Most telling is the lack of an extending eyepiece viewfinder. The HC3 still has an eyepiece, but it does not have the extendable and moveable arm usually associated with camcorders, simply a small window at the rear of the camera to press your eye to.

Sony seems to have asked ‘who’d use it anyway’, especially as there’s a large 2.7 inch LCD to frame your shots on. Leaving off the extending eyepiece certainly adds to the sleek, unobtrusive design of the HC3’s body, and many will never mind the absence. But in truth the new diminished eyepiece is not nearly as useful or functional as it might have been and this may annoy users who regularly go to the eyepiece for a more accurate image or when environmental factors, like glaring sunlight, make the LCD almost impossible to see and use.

Button controls on the HC3 follow the general shift of all Sony cameras in the past year or two, with access to almost all functions, modes and options achieved via the LCD panel touchscreen. There are but a small handful of actual buttons on the camera body, everything else will require navigating a menu. To Sony’s credit, the menu system on the LCD is well designed and with a bit of familiarity is easy to navigate, but several problematic elements remain with this approach.

Apart from the constant dirty fingerprints you’ll have on your viewfinder, the LCD is still the most fragile element on the camera; accidentally push too hard and you’ll forever damage the LCD’s pixels and thus ruin your primary viewfinder. The cost of repair for such damage may, as it very often is with hi-tech compact devices, make replacement a more financial option than repair.

What few ‘real’ buttons are present are well placed and assigned. While the HC3 doesn’t have a focus ring, a small lever button on the lens barrel serves well as a manual/auto focus switch and adjustment. Whilst this button was very useful and highly efficient in its design, in terms of space, its position on the lens barrel posed some issues. If shooting under-hand, and fairly upright with the LCD screen perpendicular to the camera body, all is well. But if you move to shooting from a lower angle, under-hand with the LCD rotated to face upwards so you’re looking down at the view, the screen covers over the focus control and makes it impossible to use.

Certainly one of the most delightful elements to see on a camera of this ultra-compact size is that the tape chamber is top loading, meaning that the camera can remain in position on a tripod while changing tapes instead of having to remove the camera as has been the case with many previous bottom-loading cameras from Sony.

On the flip-out LCD viewfinder there is a conveniently located pair of buttons for zoom control and a ‘rec’ button. These are in addition to the regular right-thumb ‘rec’ button and the forward-mounted zoom lever. Combinations like this are invaluable for ensuring such a small camera is easily operated in a variety of positions; over-hand, under-hand and even overhead.

What makes the compact chassis size of the HC3 even more remarkable is that it completely houses a standard size battery pack inside the body. Whereas most battery packs hang off the rear-end of the camera invariably throwing the balance of the camera and making it back-heavy, the HC3 body is recessed to accommodate the battery fully which also moves the balance point of the camera much closer to the centre. The feat of squeezing an HD camera into an even more tiny area to accommodate the battery recess affords the HC3 an outstanding design that’s functional and gorgeous to look at.

The HC3, as with all available Sony HDV cameras, shoots a full 1080i HD image, meaning the dimensions of the video frame conform to the larger of two standardised HD formats, 1920 x 1080. The HDV format writes this visual data using MPEG2 compression and the result is a gorgeous HD image, far in excess of traditional standard definition quality while employing a very similar data-rate to DV.

As with the majority of Sony cameras in recent years, the HC3 uses a Carl Zeiss lens and the quality of the glass and crispness of the image is really very impressive for such a small camera. When you make a camera this small usually the first thing to go is a quality lens. Not so with the HC3. The lens sports a quite respectable 10x optical zoom giving a good range, but you would certainly want to have the camera on a tripod as the camera, being so small, is difficult to hold still.

One of the crucial tests for any HDV camera – in particular one employing one of the newer CMOS sensors (rather than the traditional CCD) – is its image quality and light sensitivity under low-light conditions. This is an area where previous Sony models (the HC1 and the A1U) have not done very well, with chromatic noise and grain marring the image in most situations short of ideal bright light. The HC3 obviously has some new and improved elements in lens, sensor and processing as its performance under low-light was a dramatic improvement over other single-sensor HDV models from Sony.

The auto-focus system on the HC3 was very quick to respond and snapped into sharp focus even when shooting spaces with little contrast. Auto white-balance was likewise accurate and rarely needed to be manually adjusted. Manual white-balance is however available and easily accessible in the menu.

Sound is always an issue for small cameras. With a tiny microphone built into the body of the camera they are highly susceptible to handling noise and the whirr of the tape motor. The HC3 unfortunately seemed more prone than most and any audio recorded from the built-in mic was riddled with noise and contained only a narrow band of frequency response. Extreme highs and lows in frequency were lost and the whirr of the motor and clacks from the hands of the user were heard through the middle. These traits are not by any means unique to the HC3, indeed they are common to a good many cameras, but since the HC3 has no external microphone input jack, options for circumventing this issue are severely hamstrung. The only option left is to buy one of the Sony-made accessories, such as a short shotgun microphone, to affix to the hot-shoe on the top of the camera.

The HC3 is certainly a noteworthy camera and Sony is to be commended for the efforts to drive HD into the hands of the wider public. Its size and sleek, beautiful design make it a gorgeous camera to use and hold. The image quality is outstanding for such a small camera and the HC3 is certainly a camera that will drive home-moviemakers to the same conclusion pros have come to over recent years – once you go HD you never go back.

However some obvious omissions on the HC3, such as a mic input and headphone socket, severely limit the camera’s functionality. While many users won’t care about these omissions – happy to be in the big-image HD club – there are also many more who will be looking to move to HDV with a highly portable cost-effective camera, and potentially reject the HC3 because of them.