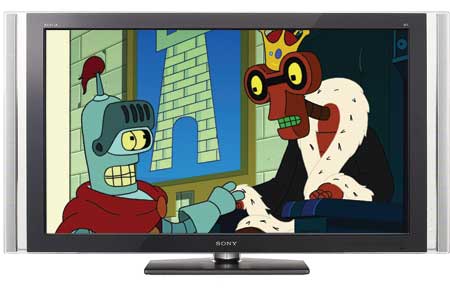 Eventually technology reaches it limits. Take the CD player – technically, there’s not a lot more that can be extracted from a CD and players have pretty much reached technical perfection. But what about TVs, and more specifically, LCD panels? For years the TV remained fundamentally unchanged (apart from the advent of colour), but today’s flat panel HDTV explosion has seen TV technology virtually start from scratch.

This works by creating a new frame between each of the existing 50 frames, then entering the ‘inter-frames’ into the output signal to double the frame rate from 50 to 100. Backlight blinking then deactivates horizontal fields of the backlight for the inter-frame calculations meaning the image is sharpened and is convincingly clear, according to Sony.

The backlighting uses red, green and blue LEDs to help deliver deeper blacks, richer colours and a dynamic contrast ratio of 1,000,000:1 (panel contrast is 3000:1). The distinction between these two measurements is that the much higher dynamic ratio is measured during darker scenes when the LCD’s backlight is dimmer. Conversely, the lower panel contrast ratio figure measures the ratio of the light output of an all white image (full on) and the light output of an all black (full off) image. A neat trick of this Sony’s backlight is that it turns on and off in sync with the pixels, so there’s no lingering image glow in darker scenes. Naturally, this screen’s native resolution is 1920 x 1080 pixels.

Connectivity’s well catered for with four HDMI inputs, plus it has ample media streaming capabilities with an Ethernet socket and DLNA-certification (Digital Living Network Alliance) for accessing photos and music from a networked PC. USB 2.0 ports are provided for playing back photos and music stored on USB devices and flash drives, and wireless Bluetooth connectivity is also possible with the optional $249 TDM-BT1 Digital Media Port, so you could wirelessly stream audio and images from your Sony Walkman or Bluetooth mobile phone.

The XBR features a new XMB (Cross Media Bar) menu system, which will look familiar to anyone who’s ever used the company’s Playstation 3. It makes a welcome change and together with a decent remote handset, finding your way around this TV is straightforward, unlike some previous Bravia models.

Bright, strong, bold colours and some of the deepest blacks I’ve seen on an LCD, this XBR’s image quality is dressed to impress. The initial set-up needs some picture enhancement adjustment, mostly dropping the colour level by six or so points, which to my eyes looked more natural. But, back to those blacks. This is one screen that definitely looks like it’s achieving very high contrast ratios, dynamic or otherwise. Figures don’t mean anything – the proof is in the pudding.

LCDs have long fallen short in producing truly deep and stable blacks, but it looks as though this is a thing of the past with this Sony. In a darkened room, equally dark scenes impressed with their smoothness and depth, which is no doubt partly down to the good work of the backlight’s LEDs. On Blu-ray, the ever-excellent Casino Royale shows just how good this Sony handles things. Fine details are really well resolved in dark scenes and there’s none of the grayish/black homogenous mass that lesser LCDs produce.

Detail retrieval is excellent right across the Sony’s particularly vibrant, but realistic-looking, colour spectrum. I didn’t detect any motion blur either, thanks in part to the 100Hz Motionflow PRO and a quick response time of 8 milliseconds. Fast-moving scenes look realistic too, which can’t be said for all 100Hz TVs, which can still leave a trail of slow-moving blurriness. The screen’s not perfect though – there’s still a loss of colour saturation and a decrease in contrast ratio as you move off viewing axis by a few degrees although it’s not as marked as some, especially earlier LCD models.

Decent sound from the slim speakers and that lovely ‘floating’ screen design top off a rather nice LCD TV. All this comes at a price though, and with an RRP just shy of seven grand, this Bravia is expensive. It’s got blacks on par with the best plasmas, bags of detail and a strong, natural colour balance. This latest Bravia is a sure sign just how far LCD TV technology has come in a short space of time.