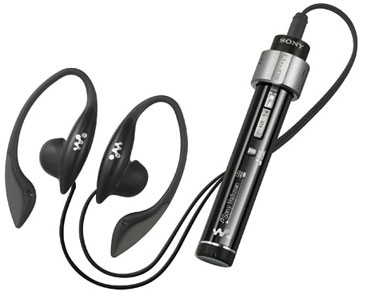 Plenty of players take on Apple’s virtual stranglehold on the portable music player market by taking on the iPod head to head. Sony’s impossible to pronounce Sony NWS205F doesn’t take that tack, instead aligning itself with a very specific market segment – the sports mad. It’s a lightweight player with lots of exercise-centric features, but unless you’re a sweat junkie it’s a player that’s tough to recommend.

The $299 version of the NSWS205F comes with 2GB of flash memory; there’s also a slightly cheaper $249 1GB version, but the price difference doesn’t seem particularly worthwhile to us. Two gig is enough for around 170 songs at a 192kbps bit rate; given that it’s a player designed for outdoors, and activity specifically, you could pretty easily stretch that by encoding at 128kbps, which will give you around 260 tracks.

The player comes with a gyroscopic sensor embedded within its small tubular body that works as a pedometer. Along with a calorie counter and a stopwatch, it’s not hard to see that Sony wants the gym crowd to purchase its NWS205F, and that’s a perception that’s only highlighted by the other bit of hardware included with the NWS205F – an armband that loops using Velcro and includes a drop-in slot for the NWS205F player.

There’s one minor drawback to the armband and NWS205F together. The NWS205F rather resembles a test tube, and the armband the inflatable cuff part of a sphygmomanometer; the end result of wearing both is that you look rather like a high-tech junkie while running with them.

Installation of the NWS205F is a somewhat convoluted process that involves charging the player – via the neatly hidden USB port on the top end of the “tube” – and then installing the Sony SonicStage software, which allows you to transfer tracks to the NWS205F for playback. File transfers were, on the whole, quite slow, and although there’s nothing to specifically confirm it, we’re pretty sure that the software coverts it to Sony’s music flavour of choice, ATRAC, en route to the player. We’re stumped as to why it is so slow, otherwise.

Once music is on the player, control is handed over to the very simple twist control on the non-USB end of the NWS205F’s tube, which can be used for track skipping, volume control and putting the player on hold. Buttons control play/stop modes, and there’s no on/off switch with which to bother.

We tested the NWS205F both as a regular music player, where it worked well enough but felt fiddly next to competing Sandisk and Apple models, and as a sports player, where it did significantly better. We did feel a little silly with the large armband on, but it held the player securely through some very vigorous exercise. Our only real complaint was that it got rather sweaty after a while.

Battery life, at 18 hours is good but not spectacular, especially when you consider the tiny organic LED screen the NWS205F sports.

Sports junkies who are sick of iPods bouncing out of their shorts pockets while on a run or at the gym would do well to consider the NWS205F, but for all the couch potatoes and stay-at-home music lovers, it’s not as good a choice.