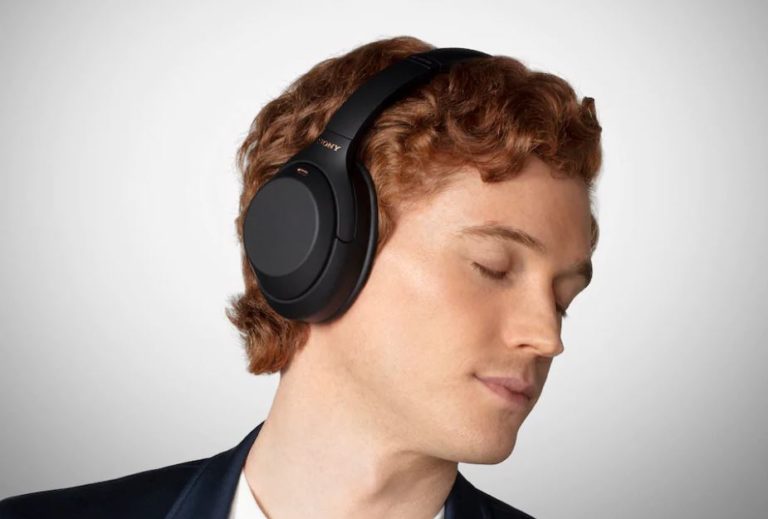 And apologies to Sony – I have had the Sony WH-1000XM4 since August and been using them for all our tests because it gives us a consistency of sound quality and volume levels. So here is the belated review.

It is all about the total package. From the solid library slipcover to the textured hard travel case it oozes quality.

Then you open the case, and neatly folded flat are the headphones in either matte black or silver (kind of a sandy silver). Here are fine copper highlights on the branding and little vents. Under the headphones is a handy reference card for touch gestures.

Regrettably, we need to resort to specifications but take it from us it is one of the top BT, ANC, over-the-ear headphones on the market. There may be some that sound slightly better (and I challenge anyone other than an audiophile to notice) and some that have added features but you cannot go wrong with this.

Headphones and earphones somewhat hamper our audio test regimen, so much of this is subjective.

The earpads allow good comfort for all-day wear although you will want to take a break every few hours as they are closed cups.

Weight is 250g (light enough), and the travel case adds about another 200g. Despite the lower weight, the design is quite bulky, but the head clamping pressure is quite light.

No ANC over-the-ear is for exercise or jogging.

Battery life varies according to volume and content. At 50% volume and ANC/BT, you can achieve Sony’s claims. More important is the addition of Auto wear sensing that saves battery when you take them off during breaks.

But if there is one downside, it is that these do not have a USB DAC (to be seen as a USB sound device) to enable USB charge and play at the same time. Here Sennheiser is king.

Again, a very subjective assessment, but we found it effectively blocked bass-heavy sounds from 0-150Hz, external conversations from 1-5kHz and a little shrill noise from 9-10kHz.

This is excellent, and we estimate it is not far off 25dB reduction.

Covering the right ear cup lets in ambient noise so you can be aware of your surroundings without pausing music or talking.

How do they sound? EXCEED

Terrific. Our tests are subjective and include a mix of Jazz, Blues, classical and vocal. Tests are with Cable, BT SBC and LDAC.

The native cabled sound signature has unusually high bass that tapers down to a good flat mid and treble.

Mid is crystal clear. However, at that critical 10-12kHz (high treble) it can be a little uncontrolled and harsh (increasing THD) and then drop like a rock off a cliff. The average listener won’t see this, but we know what to look for.

Now BT SBC and BT LDAC are not much different from the native cable. Plenty of volume and a solid sound signature. However, the app EQ can make changes that were not available over cable.

The sound stage is typically from inside your head. But when used with Dolby Atmos content and a supported device, it has a good wide stage and some spatial height.

Sony touts 360° reality audio, but it’s a free ‘trial’, so we did not try it. And like Atmos content has to be created for it. Content is on premium Deezer and TIDAL streaming services.

There is very little leakage (escape) of sound outside the headphones – users of Quiet Train Carriages will appreciate that.

Has good customisation and EQ features but is missing surround sound (see 360 earlier).

The voice mic (one on the left cup) is average and can be subject to wind noise. Callers said I was was a little muted.

The other ANC mics (two external) are highly effective at removing city noise.

Latency is the difference between what the content device transmits and how much later you hear it.

In part that is due to BT, the codec used and the host device. We cant measure that accurately, but we understand that latency from a PC/iPhone/Android is approx. 200/180/140ms. These are not the best for gamers that don’t have aptX/LL/HD codecs.

There is no doubt that these are among the best, and you will be totally satisfied. But we miss the aptX and virtual surround sound support of the M3. We don’t see the value in 360 when Atmos support would have made them unbeatable.

Let’s just say that Sennheiser, Bose, Jabra and many more have premium BT, ANC, headphones. And to be fair, only a serious audiophile would even know the difference.

So, look for these as well – in a similar bracket.

As we said, ‘A step up and sideways (not backwards)’. The loss of aptX/HD will be a deal-breaker for some that use Qualcomm smartphones. The loss of a Virtual surround sound setting – ditto.

We are going to revert to the M3 for testing because we use those things.

But for a newbie wanting to buy a great set of BT, ANC, ‘Cans’ these are perfect.

Features
9.6
Value for money
9.6
Performance
9.6
Ease of Use
10
Design
10
Reader Rating0 Votes
0
Positives
A full suite of features
Very effective ANC
Excellent sound
30-hr battery life
Negatives
One step forward and one step sideways - not enoug to get M3 owners to update
No aptX/HD support
No USB DAC for charge and play
360 free trial is not a substitute for the M3’s surround sound setting
9.8