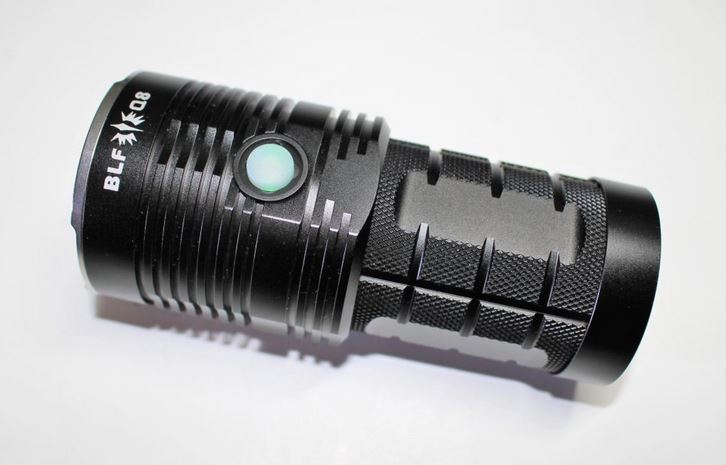 The Thorfire Q8 is a 5,000 lumen LED flashlight. It is a superb feat of engineering and design. It is one of the most powerful of its type on the planet.

In the past, a torch/flashlight comprised a few batteries and a bulb. Not so with the Thorfire Q8 – it has enough electronics and sophistication to put a man on the moon.

To put it in perspective 5,000 lumens output is ten times as bright as office lighting and five times that of a para-flood spotlight. A lumen is equivalent to the light from one candle 30cm away.

Lumens are measured at the LED and brightness depends on reflector material, lens etc. Let me just say this is amazingly bright. Generally, the more lumens that you have, the further the light will travel. But conversely, it draws more power.

The problem is that most torch makers don’t publish lumens.

It is not a question of how many lumens you need

It is about how many lumens you need for a specific task. If you are walking at night 200 lumens is fine. If you are spotlighting then 5,000 seems just about right.

The Thorfire Q8 costs A$78.20 (including freight, excluding batteries) and has a variable output ranging from ‘moonlight’ to ‘paint peeling’.

It has been called a ‘soda-can’ design as it is short and stubby. The elegant black anodised aluminium body, cross hatch grips, and overall feel is of a premium product.

There has been a lot of thought go into the design – it is not a mass produced item.

Button top 18650 batteries (like the top of an AA battery) are 18mm diameter and not stocked in Woolworths.

After lots of investigation and a bit of a shock, I found them for around $20 each (that’s $80 for four) in Australian stores. These were typically 3.6V, 2,600mAh rechargeable lithium-ion. Cheaper batteries had lower mAh – as low as 1,000mAh. Then you needed a 2-slot charger for about $35.

I was not going to spend $100+ on batteries, so this device sat on my testbed for a couple of months. By chance, I was looking for NETGEAR Arlo batteries on eBay.com.au, so I searched for the 18650 as well.

A pair of batteries takes about four hours to charge, so the ten pack gives me a spare set and more.

By-the-way Arlo rechargeable batteries are similar. If you buy locally, you are lucky to get 650mAh batteries for $10-12 each. I got a four pack of 2,300mAh and two slot charger for under $20. These will last four times as long – well a few days more! eBay is great.

Thorfire Q8 claims up to 1500 hours ‘moonlight’ from four batteries. You can run it with one to four batteries as these work in parallel – not serial like standard torches.

I have only used it for a week – about 10 minutes on full blast each night – and the battery indicator (the switch) still reports 50% charge.

Outputting so many lumens means that it can generate some heat. I found it warmish after ten minutes, and there is a thermistor that will step down the brightness if there is too much heat.

The light steps back to 600 lumens when hot (internal temperature about 50° – good as it does not turn off) and within seconds it can step back up. It repeats this as necessary. Maybe because during the test it was 11° outside I have not noticed the step-down.

In any case, between 600-1700 lumen settings are useful for most of my adventures.

It is ideal for both spot and wide lighting.

The manual is here – don’t worry it acts as a flashlight without referring to it.

GadgetGuy’s take – I see the light, the Thorfire Q8 light

The idea came from the Budget Light Forum where enthusiasts try to build amazing performance lights at prices that will not break the bank.

These enthusiasts can ‘mod’ the light to do almost anything.

The build and design are first rate. It is as precise as any Maglite or other premium product.

Once you buy rechargeable batteries and a charger from eBay for $20, it is an amazing product.

Every GadgetGuy/Girl needs one if only to scare the wildlife and alert oncoming ships that the lighthouse is not working. I love it.

Rated as a small, ultra-powerful flashlight. It has no real direct competitors.

I have seen them at a lower price elsewhere but make sure the unit is from batch two or later.

For a limited time GadgetGuy readers can get a 25% discount by quoting the discount code VTUH9OWI. That makes it $58.65 – amazing value.

Overall
Features
Value for money
Performance
Ease of Use
Design
Reader Rating0 Votes
The best made, most powerful flashlight on the planet.
None really
5