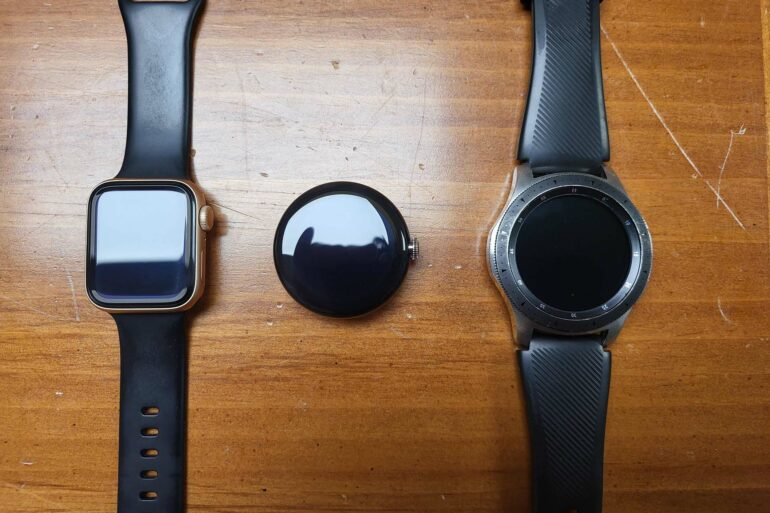 A rumoured first entry into the smartwatch market by Google has allegedly leaked, with a restaurant patron coming into possession of what appears to be an unannounced Google Pixel Watch.

According to reporting by Android Central, a tech enthusiast in the US stumbled across the device that was left behind at a restaurant. A Reddit user claiming to be the individual in question explained they received the device from a bartender friend after no one came back to collect the missing item.

In several pictures of the alleged Google smartwatch, it appears many of the rumours and speculations about a potential Pixel Watch could hold weight. Circular and understated in its design, the photographed device includes an Apple Watch-like rotating crown alongside a couple of edge buttons.

In a series of follow-up photos, the Reddit user known as “tagtech414” included size comparisons next to a 40mm Apple Watch and a 46mm Samsung Galaxy Watch, with the potential Google wearable being similar. Details are limited on the gadget’s internals or software, as a charger was not included among the lost property.

It’s expected that Google will announce the Pixel Watch at next month’s Google I/O developer conference beginning on 11 May. Reports also suggest the smartwatch will run Wear OS 3, co-developed by Google and Samsung and used in various watches.

There are also whispers that the Google Pixel Watch will use a Samsung Exynos chip instead of the popular Snapdragon series favoured by many mobile devices, including other Wear OS 3 compatible watches.

We’ll have to wait and see whether Google does announce the Pixel Watch in the coming weeks to fully verify the source’s images. It wouldn’t be the first time someone found an unannounced gadget from a major company at a watering hole – the iPhone 4 turned up at a bar over a decade ago.