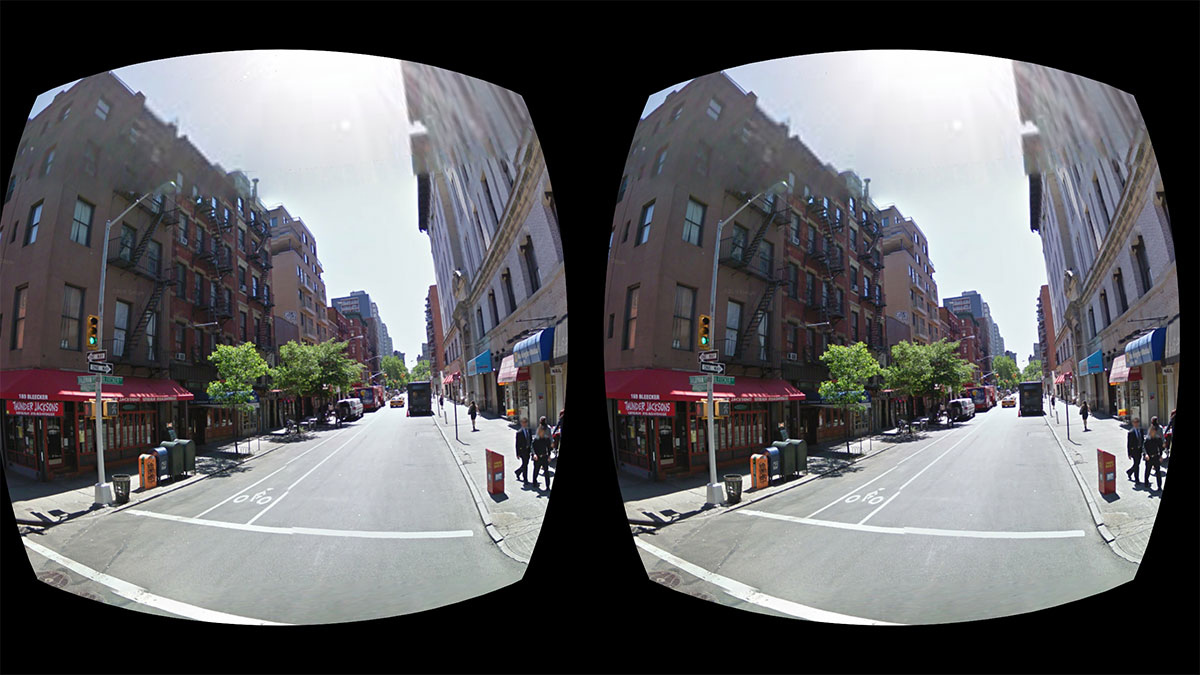 When you think about it, Google’s “StreetView” technology seems like the perfect place to showcase virtual reality, and so someone has taken it upon themselves to make it happen and give Gear VR owners that opportunity because Google hasn’t yet made it.

Imagine going anywhere without having to go anywhere at all, an idea that seems so ironic, you can only expect Alanis Morissette to pop up out of another dimension and starting strumming and singing “Ironic” just to satisfy the sense of irony.

Ignoring the 90s pop reference, that’s kind of the point of an app made for virtual reality, and it’s one we’re a little surprised to see Google not jumping all over.

Most people would be aware of Google’s StreetView by now, a concept that started as a university project being being launched as a full on Google Maps project to digitise every road and street using 360 degree camera rigs capturing the information as the cars drove across the world.

These cameras have been everywhere, from New York to New Zealand to Newcastle in New South Wales, with images created using the Google Cars to teams taking the equipment to more places where automobiles can’t touch. Buildings get the StreetView treatment as do remote locations like Yosemite National Park and Antarctica, allowing anyone with a computer to go to these places without actually going.

Virtual reality presents a very similar concept, and because of the closeness of screens to the eye, can make the brain feel like it is actually there, making StreetView a logical concept for VR.

Interestingly, Google has yet to make an official app, but that hasn’t stopped an independent developer, with Youtopia VR building an unofficial StreetView application for Oculus-ready computers and Samsung’s Gear VR.

The concept is simple enough: tell StreetView VR where you want to go and it will take you there.

You’ll find some favourite locations provided to give you a starting point, and Youtopia has built in support for voice commands, so you can quite literally tell the app where you want to go, and it will give you a decent job of finding it.

We couldn’t quite make it to Kiama, ending up somewhere in Europe, but it handled other locations perfectly fine, transporting us to Bondi Beach, Queenstown, and the outside of Disneyland (which isn’t so much picturesque as it is a large carpark set against a stretch of road).

When you appear in locations, you can look around and take it all in, as the Oculus and Gear VR both take advantage of the accelerometer to let you move your head around and act like a mouse cursor, glancing around the entire scene as if you were moving about the StreetView online.

You may find the odd bug here and there, with StreetView VR’s problems occasionally being a too sensitive reticule that occasionally flips past what you were trying to focus on, but we found performance was pretty decent in the app, while Google’s own photo stitching occasionally yields images that seem odd, but we can’t fault Youtopia for that.

One thing you can’t do in StreetView VR is walk through the StreetView map, which Google sort of allows on the web version with forward, backward, left, and right movements.

Instead, StreetView VR picks up on spaces you can “teleport” to on compatible maps via a circle that appears as you look to locations, which serves as a neat way of jumping across map areas, but isn’t quite the same thing.

It’s close and will do for now, at least until the developers find a way to let you walk or even fly through the maps with great speed, which we think would make a tremendously fun simulation of what it would be to be The Flash or Superman.

Still, what Youtopia has accomplished in StreetView VR is a cute compromise providing a fair amount of usefulness, especially if you’re keen to see the world and haven’t taken a holiday yet.

It’s almost a holiday in the sense of a Contiki April Fools prank, and yet you can try it now, with Gear VR and Oculus owners able to get into StreetView VR for free, making it something definitely worth trying, especially if you’re planning a trip and are keen to see what the destination looks like for your own eyes.