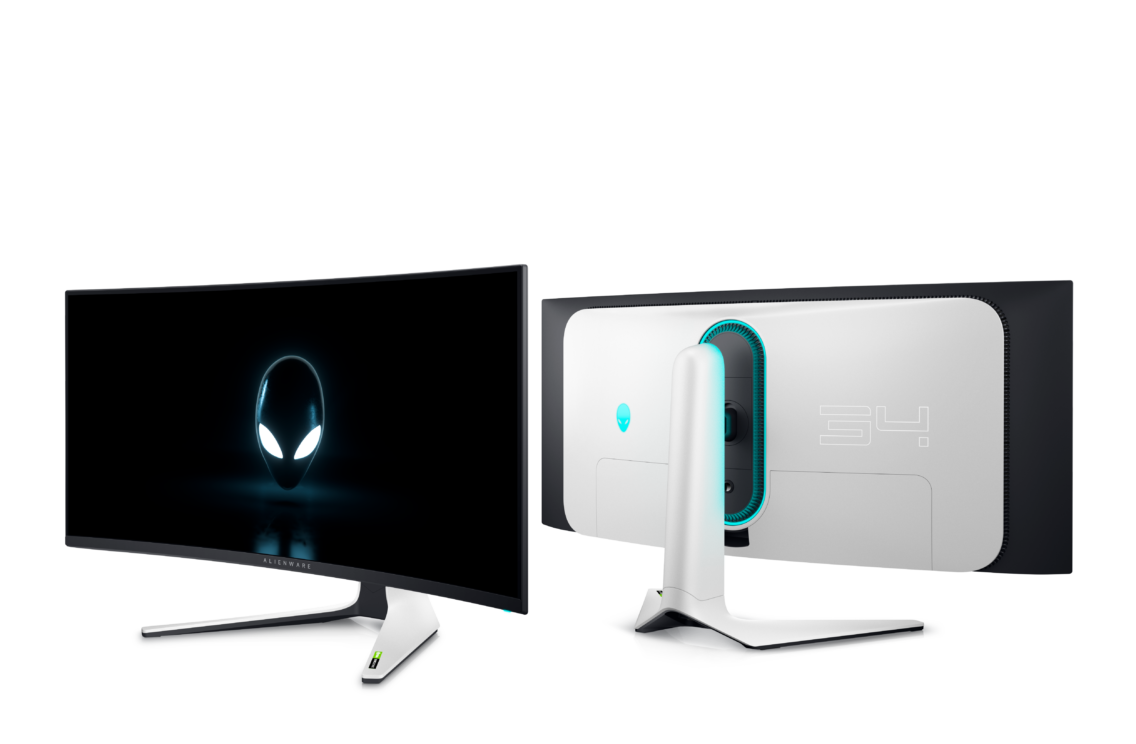 Alienware set CES ablaze earlier this year when it announced that it will be the first to bring Samsung’s Quantum Dot OLED (QD-OLED) display tech to the PC monitor space. This 34-inch, curved, ultra wide, 175Hz monitor had PC gamers everywhere chomping at the bit for one, and for good reason. QD-OLED takes all the benefits of OLED – namely the infinite contrast, wide viewing angles, perfect motion clarity and near non-existent input lag and turns it up a notch by delivering improved colours and brightness levels that a traditional OLED can’t deliver.

The question is, however, does Alienware’s clumsily named AW3423DW monitor deliver on the QD-OLED hype for PC gamers?

The AW3423DW boasts a sci-fi aesthetic that is done quite tastefully with a black and white colour scheme complemented by an LED lighting ‘ring’ on its rear. While the casing is made of plastic, it feels sturdy and looks premium.

Cable management has been smartly integrated into the stand, keeping things tidy while the narrow stand design means it won’t occupy too much space on your desk.

Setup was also quick and easy, and no tools required. The stand comes in two parts and is bolted together with the included thumb screws and then snaps onto the back of the monitor.

The stand offers a decent amount of height, tilt and swivel adjustments. The monitor cannot be swivelled into portrait orientation, which is to be expected given its long rectangular shape.

There is also an active fan on the back of the monitor to keep things cool but thankfully it never ramps up loud enough to be distracting.

Sadly, there’s no HDMI 2.1 connector, which means you will need to rely on the sole DisplayPort if you want to run games at the monitor’s native resolution (3,440 x 1,440) and maximum refresh rate (175Hz).

Alienware’s decision to go with an ultrawide for their first QD-OLED monitor was a master stroke. While a regular 16:9 widescreen makes sense for the living room, a 21:9 ultrawide is far more practical on a desk with the extra horizontal space making it much easier to juggle multiple apps at once. It’s also far cleaner than setting up multiple displays. The 34-inch ultrawide has a gentle curve that makes the on-screen content wrap around your field of vision when viewing at a normal desktop distance, avoiding the need to constantly crane your neck. The curve only adds to the immersion factor when playing games as well.

We also need to commend Alienware’s decision to not go with an insanely high resolution. The 3,440 x 1,440 resolution makes it easier to run the monitor to its fullest potential with higher frame rates while also still looking reasonably sharp during regular desktop use.

The AW3423DW also supports G-SYNC Ultimate, which is a step above the G-SYNC ‘Compatible’ moniker that we so often see on gaming monitors nowadays. This means that there’s a dedicated chip built into the monitor that replaces the regular scaler and delivers extra features such as a wider variable refresh rate (VRR) range, marginally lower input lag and variable overdrive control. It also means that games will display smoothly without visible stuttering and screen tearing even while running at the monitor’s 1,000 nits max brightness in HDR.

One caveat is that the AW3423DW appears to be using an older version of the G-Sync module that doesn’t support Display Stream Compression (DSC) over DisplayPort, presumably to save on costs. This means that there’s only enough bandwidth to run the monitor at 144Hz in 10-bit colour without resorting to chroma subsampling.

To be fair, the difference between both 10-bit vs 8-bit colour and 144Hz vs 175Hz in real use is subtle at best, so you can pick whichever you personally prefer but it would’ve been nice to not have to compromise in either department.

Another minor gripe is that there is some colour fringing on high contrast edges. If you have a black font on a white background or vice versa and zoom right in you’ll see some light colour bleed around the edges of fine text. This is because the AW3423DW uses a unique triangle subpixel layout compared to the traditional RGB stripe arrangement found on LCD monitors.

However, it’s important to note that the colour fringing is impossible to see at a normal arm’s length viewing distance and you can mitigate the issue by adjusting the scaling and enabling ClearType within Windows, which thickens the font slightly.

Let’s get this out of the way from the jump – the AW3423DW produces the most jaw dropping image found on a consumer grade computer monitor to date. It is leagues ahead of any LCD or mini-LED monitor, not only when it comes to contrast and colours but in motion clarity as well.

Where LCD monitors rely on finicky overdrive and blur reduction settings to help reduce blurring and ghosting, the AW3423DW perfectly maintains clarity of the image in motion. You don’t need to tweak any video processing options on the AW3423DW to get there either – it just works out of the box.

The AW3423DW hit 99 percent P3 coverage, 97 percent for AdobeRGB and rendered more than 100 percent sRGB. In other words, that’s better colour saturation than you’ll find on many professional displays.

Colour accuracy is assured with a factory calibration detailed in an enclosed data sheet that ships with each monitor and they were mostly consistent with the results from my Spyder colourimeter.

This is also one of the few monitors that looks good running HDR on the Windows desktop. Where most screens appear dull until you view HDR-specific content, the AW3423DW does not have this problem, maintaining rich colours and inky blacks, regardless of whether you’re viewing the desktop wallpaper and system menus or SDR and HDR content.

When a HDR signal is detected, you get a choice between DisplayHDR 400 True Black (400 nits peak) or HDR Peak 1000 (1000 nits peak). The monitor does default to HDR 400 so be sure to set it to HDR 1000 for better highlight detail and more saturated colours.

Comparing my Aorus FV43U, which is generally regarded as one of the best LCD HDR gaming monitors on the market, the AW3423DW displayed a noticeably superior mix of highlight, shadow and colour detail. In motion, the difference was night and day with the AW3423DW perfectly rendering fast moving enemies in Doom Eternal versus the blur induced smearing of the FV43U.

So how much of a leap is it over traditional OLED? After all, LG and Sony have OLED televisions as small as 42-inches available, making them a viable desktop or gaming monitor option.

Comparing my 2020 LG CX side by side, the boost in peak brightness and wider colour volume of the AW3423DW was more subtle and certainly not significant enough to warrant picking one over the other.

LG’s OLEDs do a much better job at handling ambient light and reflections. The AW3423DW uses an anti-reflective coating that lacks any sort of polarisation layers, causing blacks to turn grey when hit by light, and diluting the monitor’s contrast. In fact, even in standard indoor lighting, the AW3423DW black levels will appear visually similar to a regular LCD monitor with a dull grey appearance. It’s only when dimming the lights or using the AW3423D in a mostly dark environment that it clearly separates itself from LCD with jaw dropping contrast.

This is different to how LG’s OLEDs fare in brighter conditions where even in my sunlit office the black levels still appeared significantly deeper than any LCD.

However, the issue with using a traditional OLED TV as a PC monitor, where you’re regularly dealing with static elements and screen filling white backgrounds, is auto dimming. Whether you’re resizing application windows or running MS Word full screen, you will see significant changes in brightness that can be very distracting. The QD-OLED panel on the AW3423DW didn’t exhibit any such issues, making it a better overall choice as a PC monitor.

It’s also reasonably priced at $2,199 and regularly goes on sale for as low as $1,800. Most top tier gaming monitors, such as Asus’s PG32UQX mini-LED display, retail for as much as $3,799. The AW3423DW delivers a far superior picture, making it excellent value.

Furthermore, Alienware is including a 3-year warranty that includes coverage for OLED burn-in, giving you added value and peace of mind.

The main drawback with the AW3423DW is that it lacks a light reflecting polariser, causing the contrast and colours to drop to LCD levels when gaming in a well lit room. While this doesn’t really impact typical day-to-day PC use such as web browsing and editing documents, you’ll want to make sure to dim the lights for gaming. I also would’ve liked to have seen DSC support so the monitor could be run at 175Hz without resorting to chroma subsampling.

That said, if you’re looking for a gaming monitor that delivers the best possible image quality and performance, the AW3423DW simply can’t be beat.

More gaming and monitor news and reviews on GadgetGuy