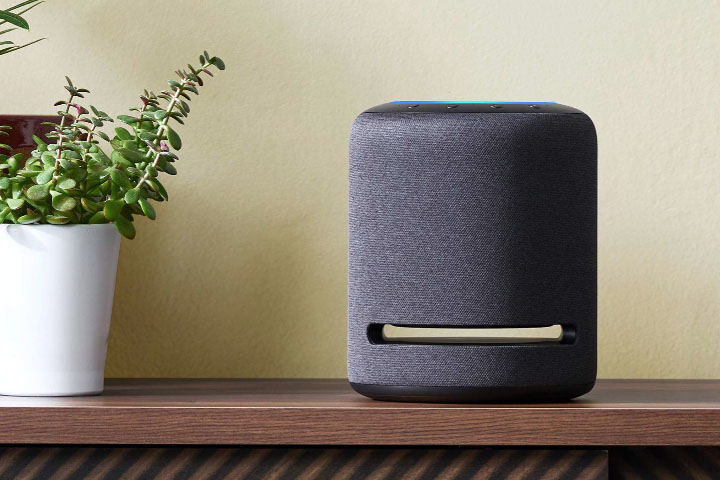 Obviously, the quality of music you’re going to get from a tiny Amazon Echo Dot smart speaker is, well, limited. But there’s now a big Echo bruiser in the Amazon family, the Amazon Echo Studio.

The $329 speaker Echo Studio is still fairly compact. It’s a 175mm diameter cylinder standing on an end. Its height is 206mm and it weighs 3.5 kilograms. Inside are five drivers. A 25mm driver fires directly forwards. There are three 50mm midrange drivers, one firing directly left, one directly right and one directly upwards. And there’s a 133mm woofer which fires downwards. Two “apertures” or horizontal slots in the casing, one on the front and one on the back, allow the sound from that out.

On top is the customary Alexa light ring. This glows in response to your verbal commands. And there are four buttons: volume up and down, microphone mute and action (that is, a “listen to me” button).

Of course, you can talk to Alexa through the Echo Studio, and Alexa can talk back. It connects to your Wi-Fi via 2.4GHz or 5GHz bands. There is no Ethernet socket. The Echo Studio also supports the Zigbee low power wireless system, This allows smart control of various light bulbs, sensors, switches and other things. Lots of things can be controlled via Alexa “Skills”.

The Echo Studio also has a 3.5mm input which can accept analogue or optical digital audio. And it can connect by Bluetooth to other speakers, or to a source device such as a phone.

It apparently supports Dolby Atmos … whatever that means. Atmos is a clear way of steering sound around a room using audio “objects”. You need audio which is Atmos encoded. I have no idea where you get that from. Or is Atmos now some kind of branding for “better”?

Setting up the Echo Studio

Since I’ve already set up a few Echos, I had the Alexa app on my phone and I’d previously given it permission to keep an eye out for Alexa-compatible devices. So, for me, setting up was extremely simple: plug the Echo Studio into power, fire up the app and tap “Continue” when, after a few seconds, it detected the Echo Studio.

After that, I tapped the Wi-Fi network I wanted to use. Amazon already had the password so it fed that to the Echo Studio. Note, I’d previously given permission for Amazon to retain the password. If this is your first Echo, you’ll have to key in the password and then, if memory serves correctly, you’ll have the opportunity to allow Amazon to use it in the future for additional devices. That’s up to you.

After that, the Echo Studio announced that it was going to tune itself for the location and ran some fairly musical tests. Then, it said, it was ready.

Meanwhile, the app had a couple more steps. For example, it wanted to know which room the Echo Studio was in so it could be grouped.

I’ll jump ahead briefly. I also have an Echo Dot in the office, and I found that when I asked Alexa to play music, it was coming from the diminutive Dot rather than from the higher quality Echo Studio. You need to switch which speaker plays music in the app. It was far from obvious where to do that, but some googling revealed the answer.

All that done, I waited for the Echo Studio to announce that it was going to update its firmware (Amazon calls it software). It didn’t. Googling around indicated that Echos update their firmware overnight to avoid interfering with one’s daytime activities. So, how to force it to update straight away? More Googling suggested that you could simply mute the device – that is, switch off the microphone – for an hour or so, and then it would update itself. So I did that.

And then, my eye lit upon a comment on one of those sites. I unmuted the microphone and did what the comment suggested. “Alexa,” I said, “update your firmware.” She doubled checked that I really wanted to, and off she went and did it. It only took about ten minutes.

The sound produced by the Echo Studio was about as good as I think you can get from a speaker of its size. Which is to say, it is unbelievably good compared to the speakers of a decade ago. There are a lot of smarts packed into these smart speakers. Audio smarts, that is.

But, first things first. The Echo Studio could easily deliver room-filling levels in my 5.5 by 6.5 metre office. At the top couple of notches things got a little harsh, but apparently no damage was done.

I started with some classic Fleetwood Mac, the album Rumours. These was nice bite on Stevie Nicks’ vocals, but without any sibilance or other unpleasantness. the rockier tracks punched out rather well. Which got me wondering, how about something a bit harder. So it was to the self-titled album Rage Against the Machine, a surprisingly well-recorded album with very powerful content. The bass line and even the kick drum came through strongly, and even at quite high levels the Echo Studio held things together so that the delivery was clean. I was again and again impressed by the bass delivery. There was a time when such performance was unthinkable.

I finally pushed things a bit too hard with the track “Astronaut” by Amanda Palmer. This builds up in the opening moments to a bass-heavy climax, resting on a foundation of extremely deep bass noise. It was that last which mushed up the sound a little. Once the track left that behind, the result was thrilling.

In the Alexa app there’s a Stereo Spatial Enhancement switch. It’s on by default. With some music it did widen things a little. With other music, it seemed to hollow out the sound somewhat. Use at your discretion. If you don’t like the tonal balance, there’s a bass, mid and treble EQ adjustment also available in the app.

I’ll stop it there. If you want the most refined stereo performance, well you’ll be looking at a very different thing. For everyday smart speaker use with much higher quality than usual, the Echo Studio is just the thing.

Well, depending on what you want to listen to. My preferred music streaming provider is TIDAL. I subscribe to the highest quality level. In Australia, you can’t link TIDAL a service with Alexa, so no go there. I would consider switching to Amazon as my music provider, except that it does not yet offer its HD music service in Australia.

Nor is it easy to stream my local music to the Echo Studio. There is a paid Alexa skill ($5 per year for the basic level) which will feed your local music to Alexa devices, but this runs on various PCs. There isn’t a version for my Synology NAS, which is where my music resides. That’s one big weakness of Echo speakers: no support for the main non-Apple network music standard, DLNA.

So I did most of my listening using Spotify. And for my test tracks, I adopted the slightly ludicrous workaround of plugging a Google Chromecast Audio into the analogue input on the Echo Studio and streaming the tracks to the Chromecast Audio.

But you can try out standard Amazon Music Unlimited. You get a free three month subscription with the Echo Studio.

Still, that did allow me to work out how to use that input. It turns out that the Echo Studio prioritises it. So I could be playing something on Spotify, then send some music to the Chromecast Audio and after a couple of seconds the Echo Studio would pause the Spotify and play the analogue input. When it stopped, I could start Spotify playing again. But you can’t control the volume from the app when the analogue input is in use.

The Echo Studio was remarkably good at hearing my voice even when it was playing at quite high levels. Although in that Amanda Palmer session, with the Stereo Spatial enhancement switched on, I did have to shout from a range of two metres.

But I’ve got an Echo Dot in my office as well. As I mentioned, in the app you can specify which speaker to use to produce the sound. Since the Echo Dot is right next to my desk, I hardly had to raise my voice most of the time to control the level.

It’s tricky trying to graph the full-spectrum frequency performance of any loudspeaker, let alone one with different drivers pointing this way and that. So I contented myself with one – it’s an important one, I think – measurement only: bass performance. I measured the output close to the slot port from which all the bass sound emerges. This disclosed a broad coverage, from a surprisingly deep 44 hertz all the way up to 440 hertz, ±3dB. Ignore the graph above 440 hertz. The microphone was in an utterly wrong position to accurately measure midrange or treble.

The Echo Studio is clearly the cream of the Echo Crop. The biggest previous speaker (apart from the 6-inch Echo Sub) had only two drivers, one a three-inch woofer. If you’re in the Alexa smart ecosystem, and you like decent music, the Echo Studio is the one for you.

Amazon’s page for the Echo Studio is here. And, as with any smart speaker system, be aware that it’s listening to you. If that worries you at all, take charge.

Features
Value for money
Performance
Ease of use
Design
Good sound at a reasonable price
Cool design
Easy setup
Alexa smarts
Lacks access to things like TIDAL and Amazon Music HD which are available in the US
4.6