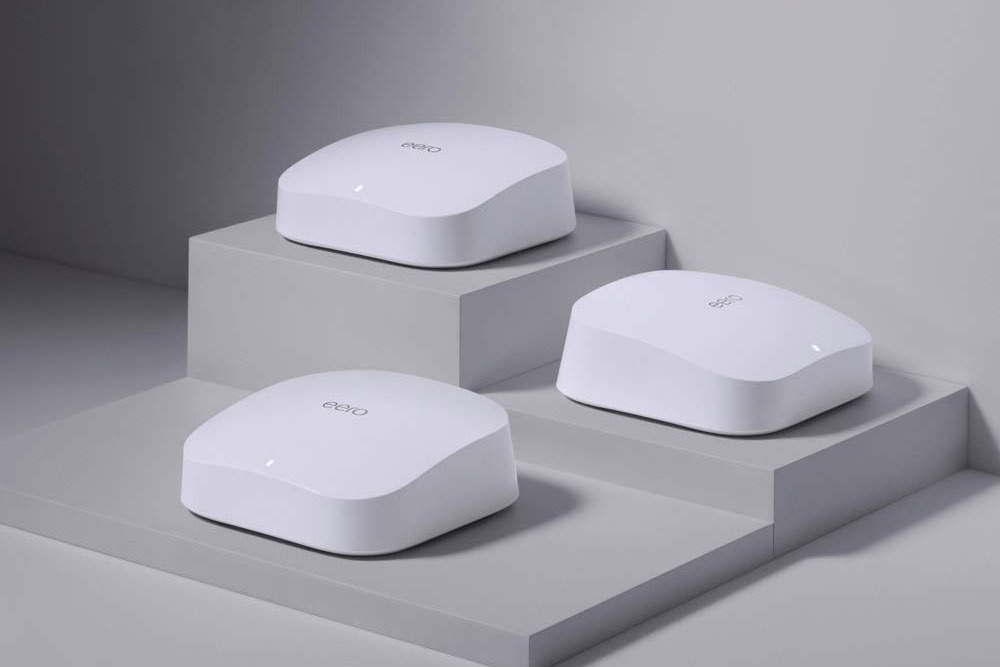 Tackling wireless black spots around your home, the Amazon eero 6 mesh WiFi hubs could be the answer to your WiFi woes – but it fails to make the most of WiFi 6. Mesh WiFi networks are designed to reach the furthest corners of your home, with several base stations working in unison. Unlike using a WiFi extender, the mesh hubs create a single wireless network. Your gadgets seamlessly roam between the hubs as you move around the house, just like your mobile phone roams between towers.

Mesh WiFi is useful if you live in a large home, particularly a multi-storey home, where a single WiFi base station struggles. It’s also handy in homes where double-brick walls and other obstacles hamper the signal. The new Amazon eero 6 mesh WiFi is an update to the original eero. It embraces the new WiFi 6 standard to reduce wireless traffic jams around your home.

The Amazon eero 6 comes with clear instructions. It is easy to set up using the iOS or Android app. The primary hub is a router that plugs directly into your broadband modem or NBN box, depending on your home broadband connection. Once the primary hub is up and running, it’s easy to add the two satellite hubs. They need access to power.

The eero app offers plenty of good advice during setup when it comes to placing the hubs around your home. They need a strong signal from each other. Living in a narrow three-storey home, I’ve always struggled with reliable WiFi coverage. I use a Google Nest WiFi mesh network – a 3-pack sells for $549, which is $50 more than this Amazon gear.

As the name suggests, 802.11ax WiFi 6 support is the headline feature with the Amazon eero 6. In theory, WiFi 6 offers a speed boost on WiFi 5. In practice, that depends on the configuration of the router. The eero 6 has an AX1800 speed rating – which means a rough theoretical top speed of 600 Mbps on the 2.4 GHz band and 1200 Mbps on the 5GHz band.

That sounds fast, but you can get similar theoretical speeds from a WiFi 5 AC1800 router. The fastest WiFi 6 routers can double these theoretical speeds. MU-MIMO lets the router break the wireless bandwidth into separate streams to cope with congestion. Frustratingly, Amazon has only opted for 2×2 MU-MIMO in the eero 6 whereas competitors can ramp this up to 3×3 or 4×4. To be fair, high-end mesh WiFi systems designed to make the most of WiFi 6 tend to be considerably more expensive than the Amazon eero 6.

While the eero 6 isn’t the fastest WiFi 6 router in town, this new WiFi standard also does a better job of directing traffic across your wireless network to help reduce traffic jams. It’s designed to support dozens of WiFi devices on your home network. This means, on a busy network, you’re more likely to reach those peak AX1800 speeds than if you were using a WiFi 5 AC1800 router. At least in theory.

Keep in mind, to make the most of WiFi 6; your wireless devices must be WiFi 6-compatible. At the moment, that’s restricted to the flagship smartphones, tablets and notebooks released in the last two years. Thankfully WiFi 6 provides higher signal strength, so all your devices should benefit today from a stronger signal around your home. The Amazon eero 6 also supports beamforming which can focus your WiFi network to reach distant devices.  As you gradually buy more WiFi 6 gear, your old WiFi 5 devices will also benefit from the reduced network congestion.

One shortcoming is that the Amazon eero 6 is only a dual-band mesh network, with one 2.4 GHz signal and one 5 GHz signal. More advanced (and therefore more expensive) tri-band mesh networks run an extra hidden 5 GHz backhaul signal which the hubs use to route network traffic.

That said, you’re unlikely to notice the difference between dual and tri-band when connecting to the internet. Not unless your connection is a lot faster than 100 Mbps, and you’re pushing it to the absolute limit. Tri-band might be more important if you’re regularly transferring/streaming huge files around your home.

The compact design makes it easy to tuck away the Amazon eero 6 hubs on a shelf, with a USB-C power socket on the back and a 150 cm power cable. Unfortunately, the compact size comes at the expense of Ethernet ports. The primary router hub has two Gigabit Ethernet ports. One for connection to your broadband/NBN box and one for connecting to your home network for Ethernet-only devices like PCs.

The original eero satellite hubs also had Ethernet ports. This meant you could plug in Ethernet-only devices at the other end of the house from your broadband modem. These Ethernet ports are missing on the eero 6 satellite hubs, which is a hassle if you’d take advantage of them. You also lose the ability to link the eero 6 hubs using Ethernet cables. This would be useful if they struggled to get a strong signal due to the design of your home.

The Amazon eero 6 includes most of the configuration features you’d expect in a consumer-grade mesh WiFi network. These include:

Notable omissions include Dynamic DNS and the option to run 2.4 GHz and 5 GHz as separate WiFi networks. Bridge mode is worth highlighting, as it’s missing on some competitors such as the Google Nest WiFi.

By default, the primary hub insists on being the heart of your home network. It must be plugged directly into your broadband/NBN box so it can issue IP addresses to your devices and direct traffic around the network.

Bridge mode lets you tell the primary hub to relinquish some of these responsibilities so that you can plug it into your existing networking gear. This might be important if you’ve already invested in a high-end broadband router. Or if you rely on your RSP-issued broadband router to run your NBN home phone line. The eero 6’s mesh features still work if you engage bridge mode, but you’ll lose access to many advanced management and security features.

The eero smartphone app is really impressive. It grants you a clear view of all the devices connected to your network and makes it easy to manage them. However, it lacks a few handy options.

The eero app home screen lists your devices by name and groups them by category, so it’s easy to find a specific device. You can tap on any device to see what it’s doing right now and its historical data usage. From here, you can also pause its internet access or block it from the network.

The system can send you regular data usage reports so you can spot data hogs. You can also use the Live Data Usage feature to see how much your home is uploading and downloading from the internet at this precise moment, with a breakdown of which devices are responsible. It’s a surprisingly well-hidden feature.

The Amazon eero 6 features a built-in firewall, but many advanced security and control options require an eero Secure subscription. It’s US$2.99 per month or US$29.99 per year, with a free 30-day trial. The eero app lets you create profiles and assign them to specific devices, making it easier to manage your household. For example, you can use profiles to schedule pauses on entertainment devices during study or sleep time.

Profiles also let you apply content filters, block sites and block ads, but to use these; you need to pay for an eero Secure subscription. A subscription is also required for threat detection, which spots malicious websites.

When it comes to coverage, the Amazon eero 6 primary base station is roughly on par with the Google Nest WiFi when you’re up close or far away. Yet, it struggles in the middle range. These tests are with the secondary hubs unplugged.

They would suggest that WiFi 6 alone is enough to guarantee a stronger signal than WiFi 5. There are other factors at play, like the antenna configuration and power output.

As for data speeds, the Amazon eero 6 is never going to be a speed king. Not when it’s only dual-band with an AX1800 speed rating and 2×2 MU-MIMO. WiFi 6 is capable of delivering much more. As such, it’s not a surprise that the Google Nest WiFi outguns the Amazon eero 6 in some scenarios. The WiFi 5 Google gear is dual-band offering AC2200 speeds with 4×4 MU-MIMO.

These speed tests involved copying a 1GB disc image across the network via FTP. The file came from a Network Attached Storage drive downstairs in my office, connected to the home network via Gigabit Ethernet. I copied it to a MacBook Pro connected to the test 5GHz WiFi networks on the middle floor. At a range of 4 metres, the Amazon gear hit 144.3 Mbps while the Google gear clocked an impressive 176.3 Mbps in the same room as the primary base station.

With three music streams and one 4K video stream, increasing the load on the network saw Amazon’s performance drop 9.1%. Meanwhile, Google only took a 4.5% hit. The Google gear benefited from its 4×4 MU-MIMO, while Amazon couldn’t make the most WiFi 6 because it only talked to WiFi 5 devices.

The second round of tests was at a range of 9 metres in the next room and connected to the WiFi signal from a secondary hub. Here the Amazon gear hit 115 Mbps while the Google gear plunged to 88.1 Mbps. Increasing the load on the network saw Amazon’s performance drop 18%, while Google only took a 12.5% hit. At short range, the Google Nest WiFi thumped the Amazon eero 6 and handled network load with more grace. The Amazon gear had the upper hand when running off the secondary hub, indicating superior mesh performance.

While WiFi 6 sounds exciting, the Amazon eero 6 makes many other hardware sacrifices, which means it’s never going to live up to WiFi 6’s full potential.

The eero 6 will certainly serve the average home well, but perhaps no better than a WiFi 5 mesh network. In most scenarios, it’s outgunned by Google’s WiFi 5 mesh gear – at least until you have a home full of WiFi 6 devices. If you really care about WiFi 6, you might consider spending more money and looking elsewhere for a mesh network, especially if your home broadband service runs at 250 Mbps or faster.

When it comes to Amazon’s eero app, it’s impressive if you’re looking for more granular control over what’s happening in your home. But if your home network really is that complex, make sure you weigh up your options.

Amazon eero 6 mesh WiFi
The network management features are great but, while WiFi 6 sounds enticing, the Amazon eero 6 doesn't make the most of it.
Features
7
Value for money
7.5
Performance
7
Ease of use
9
Design
8
Positives
WiFi 6
Strong security features
Robust user management
Negatives
AX1800 isn't the fastest WiFi 6 speeds
Only dual-band, not tri-band
Only MU-MIMO 2x2
No Ethernet on satellite hubs
7.7