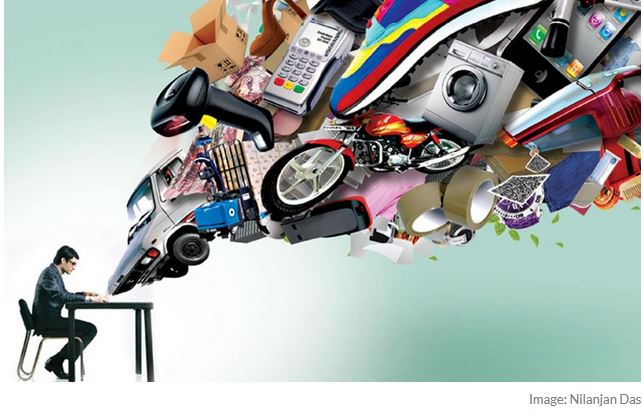 There are increasing reports that Amazon’s dogged determination to be the uber-dominate online – hell everything – channel is biting the hands that feed it. Merchants, staff, delivery, governments and buyers are revolting – Amazon agrees.

Amazon is in a world of strife, mainly due to its win-at-all-costs attitude and its belief that everyone should get with the strength or get out. Or is it just tall-poppy syndrome?

Our US correspondent has put together a selection of “Oh shit” moments Amazon is facing this quarter.

In late 2018 Apple opened an online shop on Amazon to sell new iPhones, iPads, Watch and more. It has worked very well for Apple, but the deal has led to other Apple sellers kicked off Amazon.

Apparently, the deal, proposed by Amazon, restricts Apple sales on the platform to ‘authorised resellers only’ in the U.S., U.K., France, Germany, Italy, Spain, Japan, and India.

The problem is that the deal stops ‘unauthorised’ sellers from reselling parallel imports, refurbished or second-hand Apple products – artificially creating a monopoly or ‘brand-gating’.

It appears that Amazon and Apple have entered into a price-fixing agreement which is illegal under Section 1 of the Sherman Antitrust Act. The FTC and US citizens get pretty upset about that.

It seems that the giant selling platform is pissing off its merchants in oh so many ways.

Amazon has rolled out policies to make sure brand owners can identify themselves then stamp out counterfeiters and unauthorised sellers (like the Apple deal). It’s also tweaked its algorithm to favour branded content, advertising and external traffic, alongside price and delivery speed. So, it favours brands with money over brands that work hard to provide good products and support. DigiDay has an interesting article here.

Bloomberg reports that Amazon is penalising its sellers if it finds that their products offered for a lower price on rival websites. It is so determined to be dominant in the online space, that if its merchants can’t offer the lowest price then the ‘Buy Now’ button disappears until the price is matched. But the catch 22 is that Amazon takes a much large percentage of the sale price compared to other sites, so it is forcing smaller resellers to the wall.

It is also fining merchants (from 3 September) US$1.99 for any packaging that does not comply with its packaging requirements. It says it is all about sustainability, but analysts say that it is all about FedEx ending its delivery contract with Amazon.

The public perception is that Amazon Choice Badges are products offering value.

These give higher and more obvious placement in search results. But a leaded document to Digiday shows that the ‘badge’ can be bought for lower prices and buying Amazon ads. A pay-to-play system – see the Government section later.

Workers are not all happy either

Amazon is the master of casual employment contracts that, by and large, allow it 100% flexibility with its workforce. A worker may have a solid roster for months and then nothing if they don’t meet its undisclosed performance criteria. No notice, no termination pay – no nothing.

Or you may be a delivery owner-driver only to find Amazon buying delivery vehicles and renting them Uber-style to other smucks and your business is gone. It always looks to horizontal integration doing things itself if it can make a buck.

A Yahoo Finance reporter Krystal Hu said that Amazon employs 14 ambassadors to patrol social media full-time.  Tweets from these alleged workers began spouting anti-union talking points (“unions are thieves” that make it difficult for employers to discipline, terminate or promote) when the Unions decided to target work conditions there.

ABC News has a great and shocking expose on Australian working conditions here. “I feel like they resent the fact that I’m not a robot and that I’m made of flesh and bone.”

Biting the hand that delivers you

FedEx says its break up is partly due to the inability to turn a profit citing nightmare contacts with Amazon. And the company is increasingly becoming a competitor to FedEx by renting its own planes, trains and automobiles etc.

And don’t ask Donald Trump. He says Amazon is scamming the Post Office.

Next up is the U.S. Post Office which Amazon use, at a fraction of real cost, as their ‘delivery boy’ for a BIG percentage of their packages.

Good old Australia Post (allegedly sick of Amazon standover tactics and threats to build its own parcel delivery network) has started competing with Amazon’s fulfilment business, launching Fulfilio, an Amazon-style warehouse, packing and shipping service for online companies in a partnership with eBay’s 40,000 Australian sellers to manage their order fulfilment.

In February 2019 GadgetGuy reported on fake reviews. For some well-known brands (with budgets), fake reviews identified by Fakespot were over 90%.

Review Meta says the reviews are ‘factory-created’ and over a few days flood Amazon with sufficient variety that it cannot verify the legitimacy of the content. These reviews, in turn, drive its Choice badges and sales. Compared to 2018, the fake reviews have exploded, so it must reflect a policy change at the company that encourages this (or adds a loophole).

“The fact is that we’ve seen millions of blatantly fake reviews making it through the cracks over the last few months.  Everyone is wondering why it’s so easy for ReviewMeta to detect them in minutes but sometimes taking Amazon months, if ever, to clean them up.”

Amazon launched a new ‘Onsite Associates’ program in 2018 that encourages ‘selected’ reviewers to link to products.

Amazon includes them among the results users get when they search Amazon for the ‘best’ of a particular item. But it only shows users one guide per search, and if a user adds one of a guide’s listed items to their cart, the publisher gets an affiliate commission. Where is the objectivity in that?

Two US Senators have written to Amazon stating, “Amazon can and should do more to protect consumers from these deceptive practices, and we would like to understand better what measures your company is taking to address this issue.”

The FTC also took on and won against a marketer’s use of fake paid reviews. In settling the agency’s complaint, Cure Encapsulations resolved allegations that they made false and unsubstantiated claims for their Garcinia Cambogia weight-loss supplement and that they paid a third-party website to write and post fake reviews on Amazon.com.

“People rely on reviews when they’re shopping online. When a company buys fake reviews to inflate its Amazon ratings, it hurts both shoppers and companies that play by the rules.”

This ‘fake review phenomena’ is out of control

First, you wonder if reviewers have actually used the product or just cut and paste from the product’s website. Note that some large companies have extensive guides and content tucked away in secret pages to ensure fake reviews stay on-message and are subtly different.

Faceless Philippines (and lately Chinese) fake review factories churn out reviews by the thousands and flood any review site.

One factory reportedly has over 60,000 writers earning a few cents to a few dollars per review. The scam is simple. Fake reviewers receive a secret code to buy the article for say $1 on Amazon (to gain a verified review status) and then post reviews and sell the product, ironically on eBay.

Some companies and agencies pay even more for posting fake negative reviews on competitor’s products.

Its terms of service for sellers expressly prohibit “any attempt to manipulate sales rank.” This includes accepting fake orders, placing orders on your own products, and paying buyers to purchase products. It also prohibits sellers from creating multiple seller accounts, writing reviews on their own products, and simulating customer traffic to a product.

It says it has applied stricter criteria for leaving verified purchase reviews. US reviewers must have a password-protected account and have made at least $50 in purchases on Amazon with a valid credit card.

Amazon, through lawsuits, human moderators, and algorithms, is trying to keep fake reviews off the site

And the Government is not happy either

Amazon is also currently facing multiple antitrust probes into its business practices. The European Commission announced last month that it was opening an investigation into whether Amazon engaged in ‘anti-competitive conduct.’

US Senators Richard Blumenthal and Bob Menendez sent a letter to Amazon about one of its opaque practices: Amazon’s Choice. This is the program that selects certain products on its marketplace and provides it with a special badge to encourage customers to buy it. Amazon’s recommendations have led consumers to shoddy products).

The US Justice Department recently announced its own anti-trust probe of tech giants that will include an investigation of Amazon.

It alleges Amazon managers engage in “conspiracy” to illegally solicit sellers from the eBay platform to Amazon using tactics that violate eBay’s terms of service. It’s eBay’s second lawsuit against Amazon over the seller poaching – the first is now in arbitration.

Not to mention Gerry Harvey

Gerry was at the forefront of making Amazon pay GST on international sales in Australia. “Amazon dreadful, dreadful people” he would repeatedly cry. But many would say that anything that can make Gerry throw tantrums is probably good!

It turns out he was right. Australia has collected $81 million from Amazon since GST now applies to low-value online items.

But the increasing sentiment that Amazon is destroying traditional retail is encapsulated in the US Treasury Secretary Steven Mnuchin statement to CNBC.

Amazon the disruptor is more like Vlad the Impaler

Amazon is out to win at any cost. It rightly is grouped in with FAANG – Facebook, Apple, Amazon, Netflix and Google.

Twenty years ago, Amazon started as a cheap online bookseller – to win hearts and minds and establish brand credibility. But in following that model, it has reached a tipping point discovering that there is no money in cheap.

Amazon is now its third-party marketplace’s most significant competitor with Amazon’s own brands and access to marketing data that those merchants would kill for. It is also those merchant’s biggest cost overhead with fulfilment costs, advertising and more (Black Friday deals etc).

Amazon has reached that tipping point on the backs of those merchants.

It’s hard to keep growing rapidly in any market after a certain point. That point is where shipping low-cost goods is no longer economical. But it did that to get to a place where it can change direction.

It controls 7.7% of all retail (online and off) in the US. And, with its purchase of Whole Foods in 2017, it’s now the fifth-largest grocery seller in the country. And, as of last year, Amazon Web Services controlled 40% of the cloud market.

Judging by its move to services (just like Apple), its next frontier will focus more on its under-penetrated, higher-margin digital services business. And it is targeting Google et al., for a slice of their pie – hell, the whole pie if we let it.

Google Wing drone deliveries take off in Logan during lockdown